We got up to an overcast sky. There was a bit of a breeze and there were no bugs to worry about. Our dry bag – a Watershed Colorado –  got filled with the sleeping bags, Thermarests, and all the other stuff that needs to be kept dry. Then we packed away the tent and bug shelter. While that was going on we had the water on the Primus stove to boil so we could make our oatmeal and essential mugs of filtered coffee. We had breakfast under the tarp you see below.

our island campsite in the morning after the tent came down 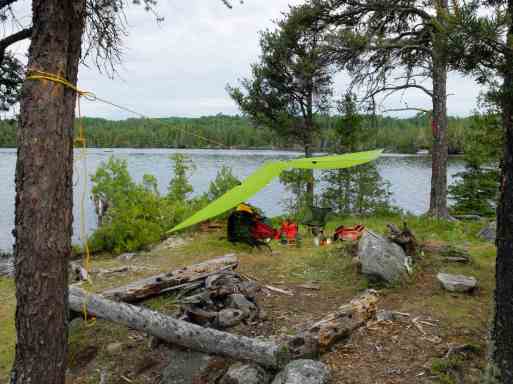 Our agenda for the day was very light and involved less than ten kilometers of paddling!  We had three objectives:

First up, the rock paintings. The photo below captures the semi-circular little cove where they are located. We spent a half-hour at the site, getting shots of the main panel and other images to the side. Max and the canoe sit there to provide an indication of scale while I scampered onto the rock and framed some more shots. 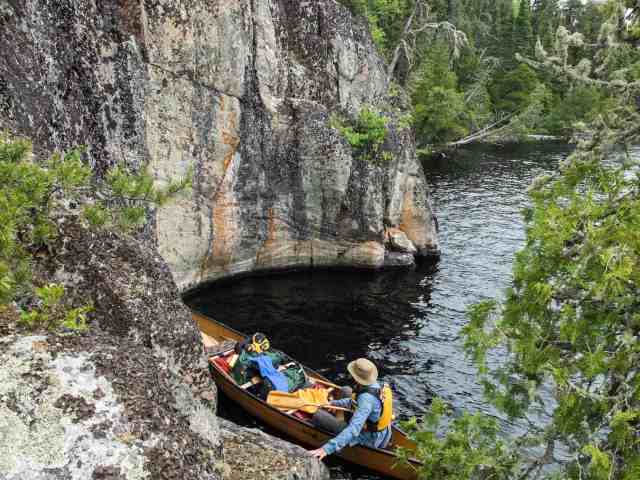 the main panel at the Pothole Site on Little Missinaibi Lake

The Pictographs Of Little Missinaibi Lake 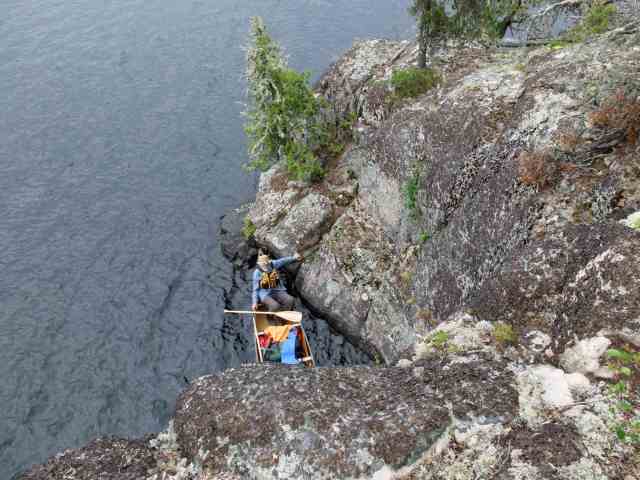 a view of the Pothole site from above

After our time at the Pothole site, we continued north, stopping at the Air Dale island outpost on our way to the outlet of Little Missinaibi Lake. It was a Sunday and a new crew had just flown in earlier that morning. We chatted with a couple of fishermen – they were from southern Ontario – about their luck so far. They had a couple of pike for their first efforts but they were just starting.

A week later after they had returned home I found out from one of them that during their six days there the four of them had caught 606 fish. It sounds impressive though I’ll admit that as a non-fisherman,  I don’t get the point of “catch and release”. It may be that they, in turn, don’t get the point of a canoe stroke being repeated 8,000 times day after day for two weeks!

We also asked them if they had a satellite phone. Since our Spot Connect had stopped working,  we were hoping to get a message to our families that everything was fine. They did have a sat phone;  however, it apparently just connected to the outpost owners in Wawa. When they relayed our message, the connection was (I was told later) bad enough that it did not get through. On returning home we learned that our families had never been contacted. 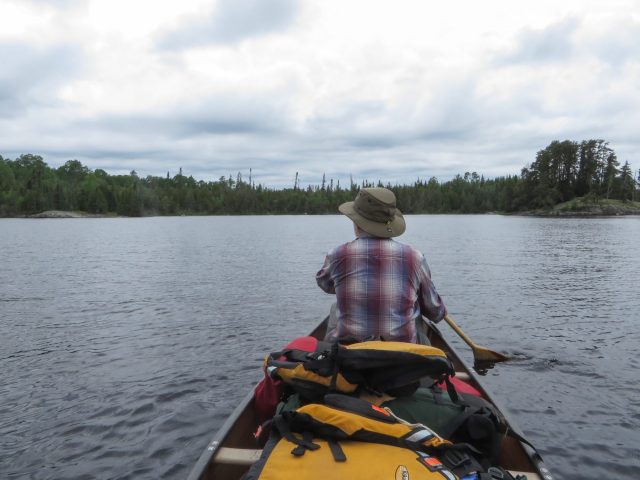 paddling to Admiral Falls on the Little Missinaibi

We passed a few campsites as we made our way north from the outpost. In the photo above I am scanning the left shoreline for a campsite indicated on the Chrismar Missinaibi 1 map. On the right another Park campsite marker is visible. We, however,  were headed to Admiral Falls. We figured we may as well include at least some of the portage in this day’s very light workload; setting up camp near the falls would hopefully also give us more photo ops.

our only moose sighting of the trip

Not in the calculations was the weather; we could feel that something wet and sustained was coming in. At Admiral Falls we found the campsite about half-way down the portage trail; it was just a few meters off the trail away from the falls. There was no official campsite marker there but it looked serviceable. (While Hap Wilson’s guide-book (1994) mentions the camp site, the Chrismar Missinaibi 1 map from 2008 does not.)

We had just got the über-tarp up with the tent underneath when it started raining. Soon after we put up the NoBugZone a bit closer to the main trail; it was our third time putting it up and we were getting better at it! It was about 2 p.m. and we were done for the day! 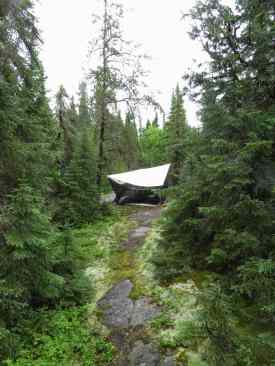 For the rest of the day, we would listen to the pitter-patter of rain on nylon. Occasionally it reached the torrential level!  We were dry and cosy but left wondering how long the deluge would last. Add some thunder and lightning to the rain and we were very glad to have set up camp when we did. Morning would come and with it still more rain. We would sit and wait!

Not that there was any rush – it was Sunday and we still had four days to deal with the fifty kilometers to Missanabie and the train ride back to the starting point at Healey Bay. As for the falls, they were ‘nice’ but did not match either of the ones on Day 3 as canoeist eye-candy! 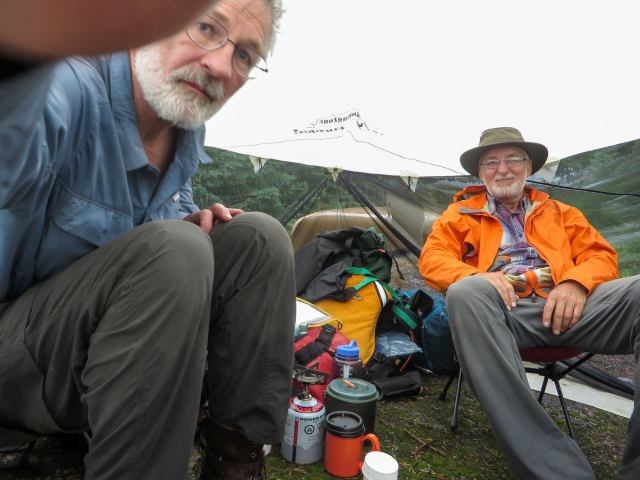 Next Post – Day 6: From Admiral Falls To Whitefish Falls on Missinaibi Lake

This entry was posted in Pictographs of the Canadian Shield, wilderness canoe tripping. Bookmark the permalink.