Overnight clouds and rain moved through the area and the next morning the sun was back out.  I would have a pretty easy day of it.  Well, perhaps make that “morning”  since I rolled into Bicheno shortly after noon, having covered the 42 kilometers in about three hours of leisurely cycling.  I am enough of an obsessive-compulsive Type A personality that I do remember worrying that I was not covering enough distance each day and that I was spending too much time being a tourist. Noon – and dun? Ya gotta be kiddin’!

The A3 on this day strayed far from the beaches and I recall cycling past long stretches of farm fields on fairly flat terrain.  Some of the pix below convey the overall scene. There was one bit of climbing to do; it came up near Apslaw just after the road turn off but even it – compared to the 600-meter gains in elevation I would be doing a week later on the West Coast – was no big deal. And, of course, if you are hurting on the way up, you’ll have tears flowing out of your eyes as you bomb down the other side of the same bump in the road.

The point I eventually clued in to was that the bump on the graph above is not a 2-D representation of the actual hill but rather an indication of how much altitude you will gain in a set distance.  The road can only be so steep; what you should really be imagining is an extended series of switchbacks that takes you up from, in the graph above, 8 meters to 183 meters, over a five-kilometer distance. While it still hurts, it gets done!

heading north on A3 from Swansea 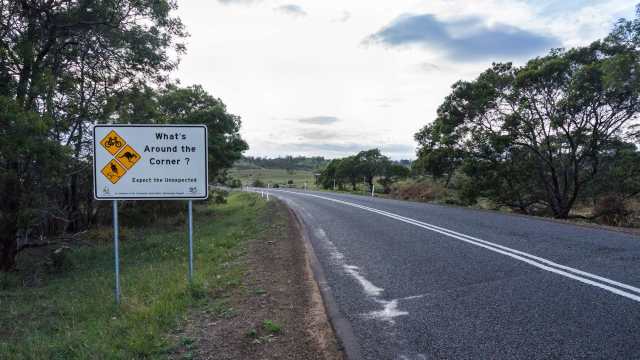 Tasmania’s east coast and its incredible beach vistas!  Well, not on the stretch from Swansea to Bicheno!  It is only when you get to Bicheno itself that you are back at the water’s edge. Getting there shortly after noon gave me lots of time to ramble along the seashore after putting up my tent at Caravan Park.

stretch of road S of Bicheno

looking down more flat road on the A3 to Bicheno 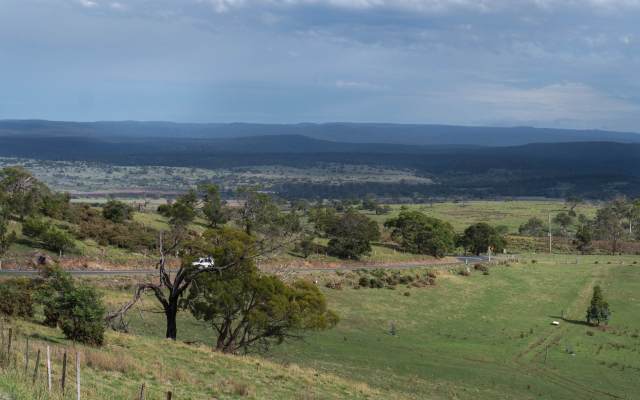 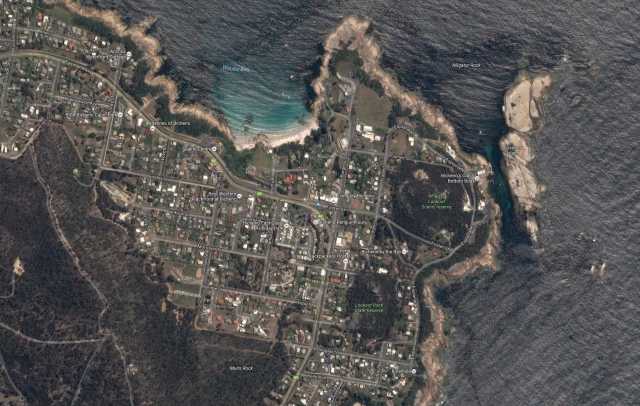 See here for the Google map view of Bicheno.

I put up my tent on the cushy grass surface in Caravan Park’s camper section.  I was surrounded by over a dozen fellow bikers – but these guys and their wives – were motorcyclists who belonged to the Ulysses Motorcycle Club. Billed as a club for “mature riders” I was looking at a crew who looked like they were in the retirement phase of their life journey – kinda like me!

There is a motorcycle museum in Bicheno which may have been the draw for these riders from the mainland states.  Given their friendliness and generosity with beer bottles, their slogan “growing old disgracefully!” was a bit of wishful thinking!  Later on, I’d shoot the breeze and sip on the supplied beer with some of them – but first I had a veg-friendly lunch to find a beachfront to explore. 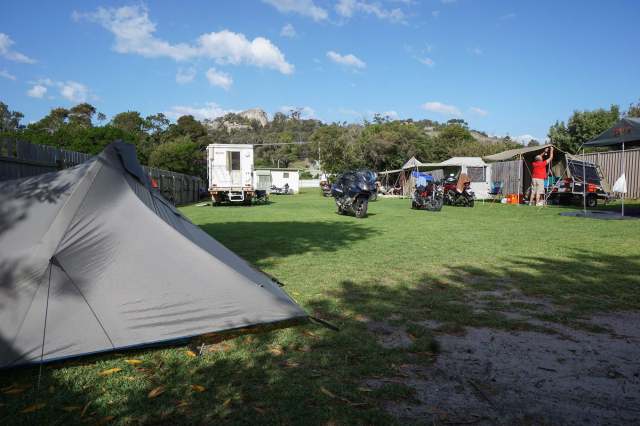 my tent at Bicheno Holiday Park

I would end up at Pasini’s, an Italian eatery with a lunchtime pizza that did not have cheese on it. In fact, it was so delicious that I went back again for supper and had the same thing!  Sometimes you have to take what you can get!

Bicheno’s Foreshore Footway – my route from the campground

Along the shore is a path called the Foreshore Footway that provides some excellent view – all the way from the Blowhole at the south end.  I spent an hour or more ambling along and pointing my camera in various directions. Some of the pix are below!

trail marker on the Bicheno shore 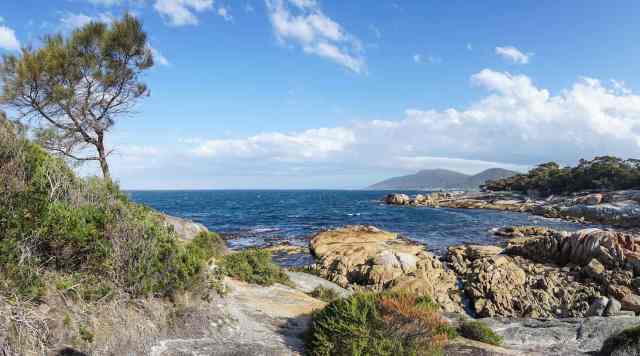 tourists waiting by the Blowhole on the Bicheno shore

As I wandered back to the campground after my lunch at Pasini’s I passed by a shop selling water sports-related gear and supplies – but it had this unexpected item hanging in the window.  There were actually two of them – two dreamcatchers.  Long associated with Anishinaabe culture in my home province of Ontario in Canada, what were they doing here! Okay, the hoops were plastic and not willow and the threads were plastic too and maybe the feathers were not eagle feathers  – but still!

It is quite likely that someone would be offended by this “thoughtless act of cultural misappropriation”! 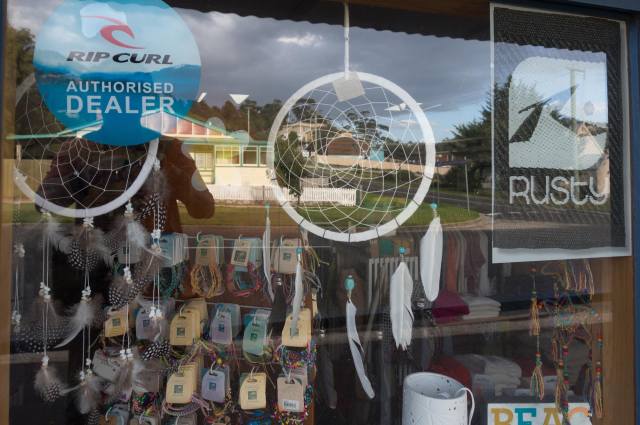 The next day would be my biggest day yet.  Not only would I do more cycling. I would also do more of it on a road closer to the shore than had been the case.  The next post has the pix to prove it!