A Boat Cruise To The Bottom of Tasmania’s Bruny Island

Along with beautiful beaches and a laid-back atmosphere, Bruny Island offers visitors the chance to take an unforgettable boat ride down the coast of the island to its southern tip. Twice a day Bruny Island Cruises craft sets off with thirty or so passengers on a two-to-three-hour adventure. The cruise regularly makes it into lists of Australia’s top tourist experiences.  This YouTube video gives an excellent idea of the trip; just remember that you’ll be in that boat and not in the airplane used to film many of the stunning aerial views!

Leaving Adventure Bay at 11:15 a.m. or at 2:15  in the afternoon, the boats travel about thirty kilometers down to the Friars, a collection of islands and rocky outcrops and the home of a number of fur seal colonies, before turning back for Adventure Bay. 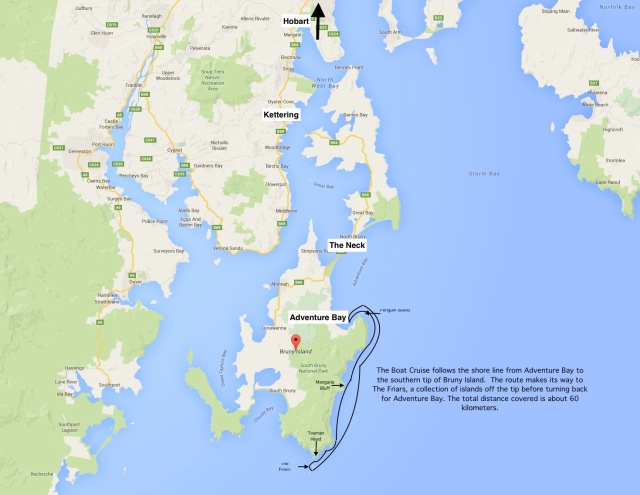 Here is a promotional photo of one of the company’s boats.  Note the red rain gear – it is supplied by the crew after you board the vessel;  wool caps and gloves are loaned out at the welcome center at no extra cost. Given the strong wind blowing from the south and the choppy water that day,  I would make use of them all for the extra warmth and water protection they provided. 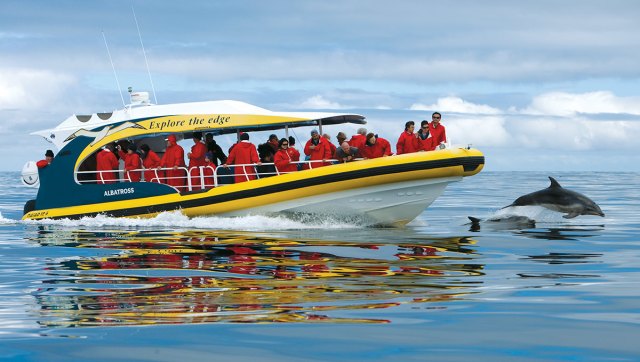 Since the morning trip was sold out, I bought a ticket for the afternoon cruise.  At $120. it is not cheap but it is $15. cheaper than the morning outing.  I am not sure what the difference is or if there is an advantage – in terms of water roughness – in taking one or the other.  (Spoiler alert!  The sixty-kilometer round trip would prove to be worth the cost. When you consider the salaries of the three experienced and capable crew members, the cost and maintenance of the boat, the insurance…well, you would have to wonder how someone could do it all for $60!)

The boat left Adventure Bay and rounded the point around the outside of  Penguin Island and made its way down along the coast.  One of the main attractions of the trip is the dramatic cliff face – sometimes vertical columns of dolerite stretching up for one hundred meters , sometimes caves and holes and passages created by the incessant pounding of the waves over time.

looking into a passage eroded through the rock

Bird life is plentiful; on our way down the coast we passed a number of spots that seemed to be favoured by seagulls, cormorants, shearwaters, and other birds. In the image below, nobody was home but signs of their presence was evident! 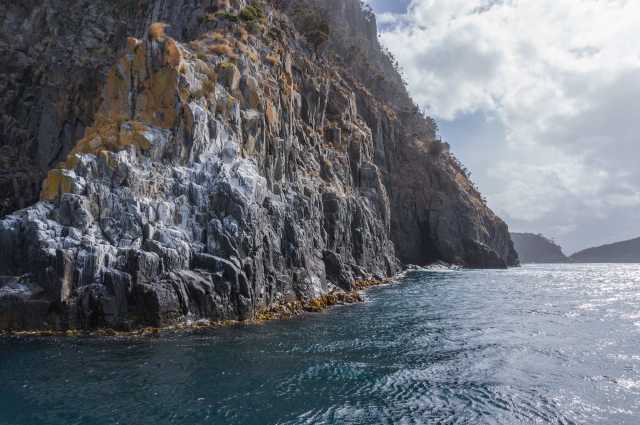 bird poop covers the perches on a cliff face

We passed by the dramatic dolerite columns below and stopped for a photo-op, the boat circling around slowly to give passengers on both sides of the boat  a chance to get a shot or two.

At times the spray from the waves was such that we got lightly showered; my cameras were tucked safely away under my red overcoat.  Occasional stops for various geological features like blowholes or the columns above were moments when the cameras came out we all snapped madly away.

fellow travellers at work with their cameras

a group shot with the Bruny Island cliffs in the background

A couple of year ago I visited a penguin colony and a sea-lion colony in the Strait of Magellan not far from Punta Arenas at the bottom of South America. While we did get to walk among the penguins and it was easy to get close-up shots, I was later frustrated with the limitations of my lens when we passed by Marta Island and the sea lions.

The 16-80 mm lens on my dslr just didn’t zoom in close enough.  I was later reduced to cropping the images in my Adobe Lightroom app to make them seem more immediate. As the following image on shows, it still was not close enough!

This time the 55-210 lens on my Sony A6000 would allow me to get real close-ups of any wildlife we encountered. I did increase the iso to 1600 and sometimes to 3200 in order to  have faster film speeds and compensate for the rocking boat.  I did see iPhones snapping away at the same time and wondered how those shots would turn out!  Here is what my telephoto zoom lens was able to deliver –

Where in the world is Waldo the Australian Fur Seal?

Near the southern tip of Bruny Island is a collection of islands and rocky outcrops called The Friars.  It would prove to be the highlight of our trip.  While the seagull below was easy to see, on first looking at the above scene, I did not notice the fur seals!  Take a look at the cliff face above and see how many you can pick out! (There are eleven in all!)

We would spend some fifteen minutes or so with these fur seals, stopping in front of a couple of different terrace rock outcrops where they were lounging in various states of alertness.

two more fur seals on the rock ledges of the Friars 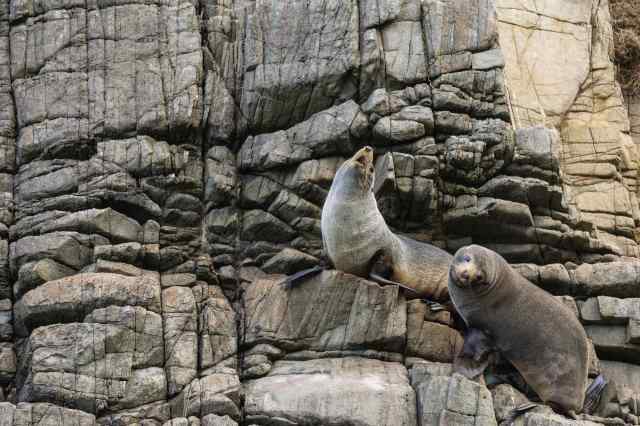 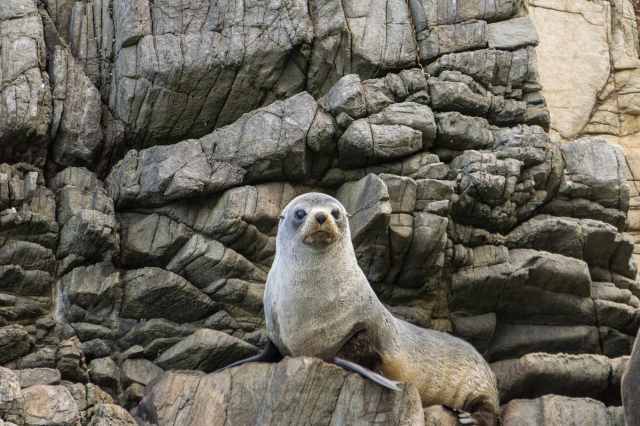 I later learned that the fur seals we were looking at belonged to the Australian Fur Seal species, one of seven in the Arctocephalus genus which are found mostly in the southern hemisphere.  They did look different for the true seals – for example, the harp seals and grey seals of the waters off the coast of Newfoundland – that  I am familiar with.  Like the Canadian seal the Australian seal (Arctocephalus Pusillus)  was  once the focus of a thriving seal hunt.

As the map indicates, there is another species of Arctocephalus – the New Zealand or  forsteri – found in Tasmanian waters.  I am assuming that the ones we saw that day were the more common Australian ones. Let me know if you can spot any of the forsteri species on the rocks.

five fur seals look back at the creatures in the boat

Leaving The Friars, we headed back for Adventure Bay, moving a bit faster than on our way down.  To make the trip complete we would encounter a few dolphins as they swam along the boat or in the boat’s wake.  Given the wind and the rocking motion of the boat,  I did not bother pulling my camera out from underneath the raincoat  to attempt a shot. As it was, the dolphins tended to pop up unexpectedly and disappear just as quickly.  It was a thrill just to see them without worrying about capturing the moment!

the ride back after dolphin watching

Shortly after four we were back on shore.  The consensus of the people I spoke to – while a sunnier and calmer day would have been nice, it was definitely a worthwhile experience that we were happy to have signed up for!

This entry was posted in Tasmania. Bookmark the permalink.