I knew Viggo and I  were in for a great morning walk even before the laptop was shut and the  reading light went off for the night.  The weather radar showed bands of blue – that’s snow – coming from Wisconsin and Michigan. The weather man was predicting traffic chaos as southern Ontario dealt with a massive first wallop of snow! Ten centimetres – whoa!  And I’m thinking – “Bring it on!” (They tend to exaggerate these “snow events”  but I guess it’s their moment in the spot light.)

You see, my dog Viggo is the worst bicycle chaser ever.  It means that during most of the year we can’t go down into the Don Valley – our favourite walk –  because of the heavily used bike path.  Once or twice, Viggo has taken after bikes as they come whipping through at Tour de Franc speeds and, understandably, not everyone is thrilled to have a herding dog yipping and yapping and chasing after them. So – we usually don’t go down there without Viggo being on the leash.  However, put down a layer of snow and then there are no bikes (well, real hardcore cyclists and joggers excepted)! 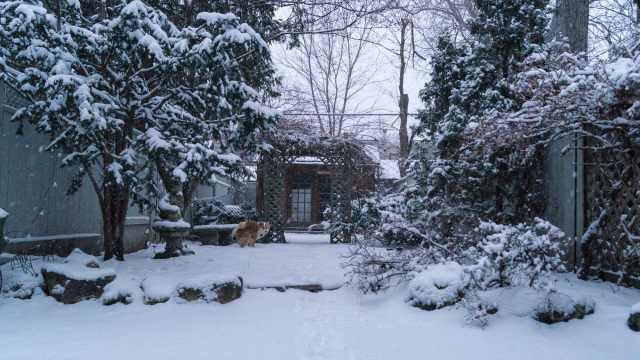 the backyard at dawn – Viggo doin’ his “business”

The backyard certainly looked good when I opened the patio door for Viggo at about 7:30. The dusting of snow – nowhere near the predicted ten centimetres – looked promising. It would make cyclists think twice about the Don Valley Bike Trail.

It looked to be an overcast kind of day with subdued light but by the time our critters – the two Abyssinian cats Maya and Bodhi  and Viggo, our Icelandic Sheepdog – had been fed and I had injected my essential two cups of coffee, it had stopped snowing.  The just-below-freezing temperature was pretty mild at -3ºC.  Viggo and I were ready for our walk.

Viggo poses for a shot as we walk up the street

Up our street we headed for Broadview Avenue and then the walk down the slopes to the Riverdale Footbridge which crosses the Don Valley and the Expressway.  When we got to Broadview I had Viggo jump up into my arms so I could carry him across the road. The city road crew had dumped a ton of salt on the road and by now it was a slushy mess and not something Viggo’s paws were meant to be walking in.

a view of the city from Broadview Avenue

panorama of downtown Toronto from the slopes by Broadview – click on to enlarge!

As we headed for the bridge and the steps halfway across it that take you down to the riverside path, we stayed on the clean snow and away from the snow-free road and its stew of slush and salt.

bare road thanks to a dumping of salt

As we walked over the bridge we got a great view of another of Toronto’s excellent tobogganing hills.  The area you see is also an off-leash dog area but given Viggo’s chase drive he ends up chasing the sleds as they come bombing down the hill – so no Riverdale Park West on snow days.  The hill is empty in this pic only because it is a weekday and the kids are at school.

On the east side of the Don River is the Expressway, a major traffic route into the downtown core. That is the Don River – straightened and managed and otherwise abused over the past hundred years by urban developers – running straight down the middle with the green Riverdale Footbridge crossing it.  The multi-use path is on the right. 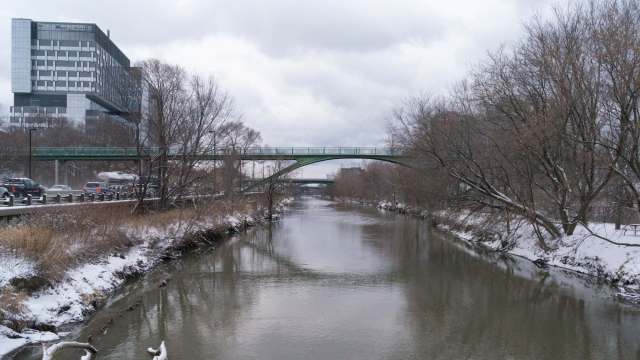 down on the riverside trail – the Don Valley

And here is Viggo as we left the path and made our way to the river, breaking a fresh trail since no one had been there yet on this morning. 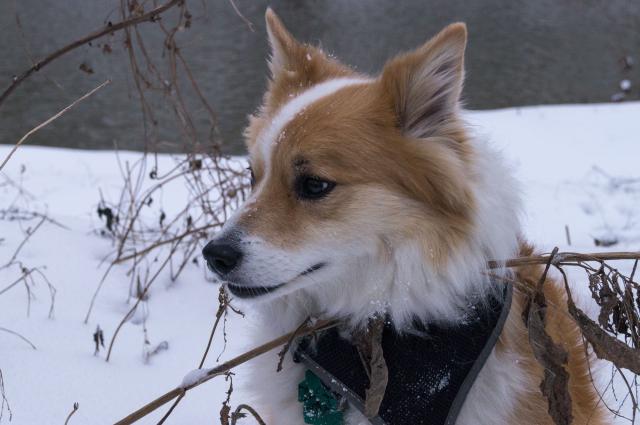 Viggo above the Don river banks

And as we approached one of my favourite views – a bend in the river where you look south and forget for a moment that you are one hundred meters from a major expressway smack dab in the middle of a city of four million.  I like T.O. – but I love that feeling!

a bend in the Don River

Viggo, of course, is trying to recall exactly where that fish carcass that he rolled around in last October was located.  (Hint: it was about three feet in front of your nose, buddy!)  He stank so bad – from a human point of view – that he got an unplanned shower that morning when we returned home.

On the plus side, the sun was actually breaking through the cloud cover on occasion, creating some appreciated drama in the landscape. Viggo had his own ideas about creating drama. He has focused his view on the ducks not far off-shore. 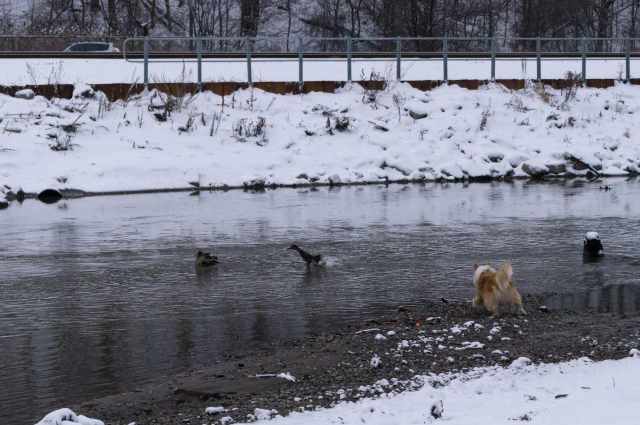 ducks in flight on the Don River

Back to the main path we headed, but not before passing through one of the prime camping areas along the stretch of the Don River south of the Bloor Street Viaduct.

winter campers on the banks of the Don

As we walked by I went up to the tent door and asked if everybody was doing okay. I got one and then another weak “yeah” from whoever was inside. In the back of my mind when I approach tents in the valley in the winter is the horrible thought that – thanks to the effects of drugs or alcohol the night before – they didn’t make it through the night. 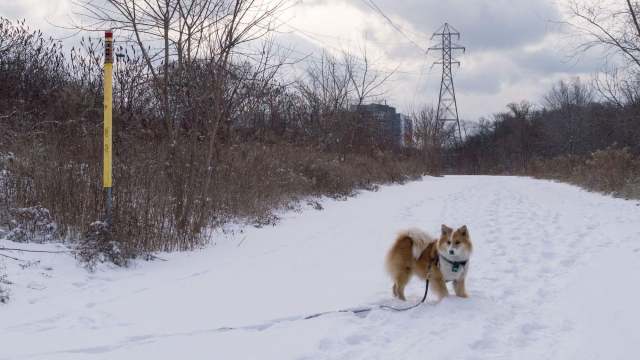 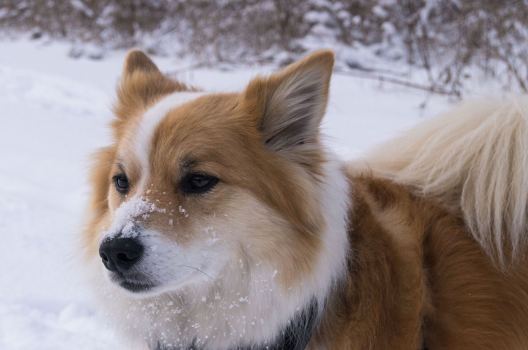 Viggo with a bit  of snow on his nose

We were heading down the main trail on our way back home when we came close to the river again. Who should be there but the two ducks that Viggo wanted to get closer to!

Viggo spots his duck buddies on the river 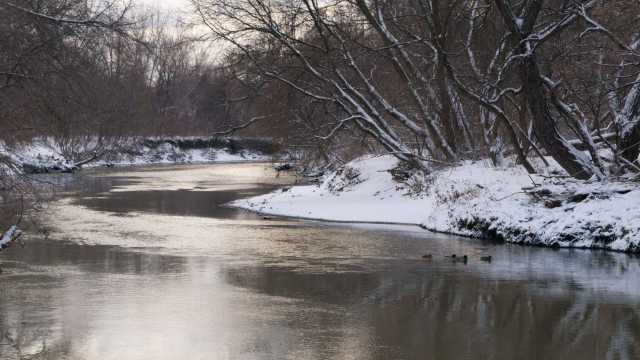 sun on the river

heading south to the Riverdale Footbridge 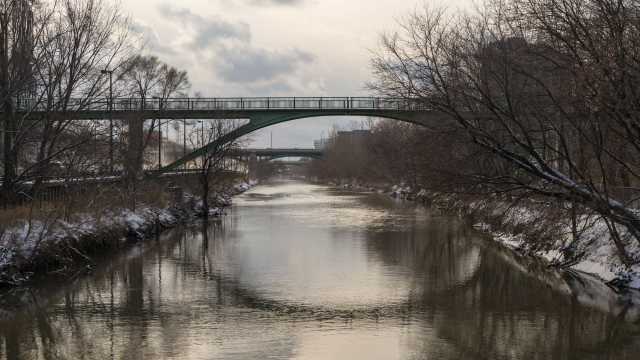 Three bridges over the Don – the Riverdale Footbridge, Gerrard, and Dundas 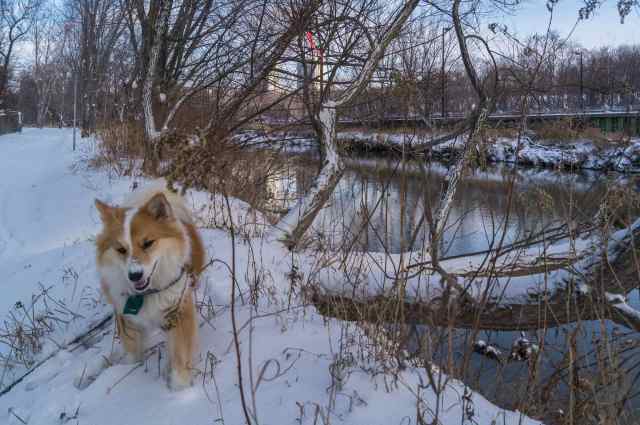 On the Riverdale Footbridge, I looked west to the hill. there were still no sleds on the hill but a half-dozen dog owners were there with their dogs. 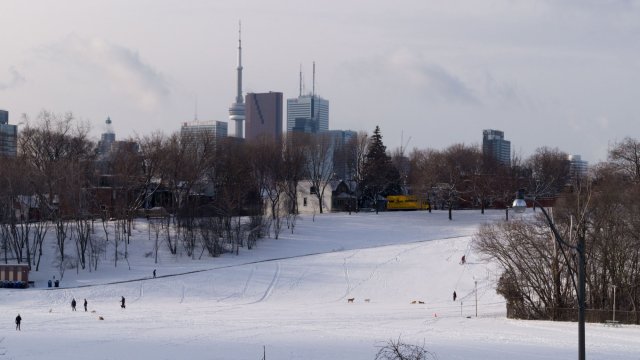 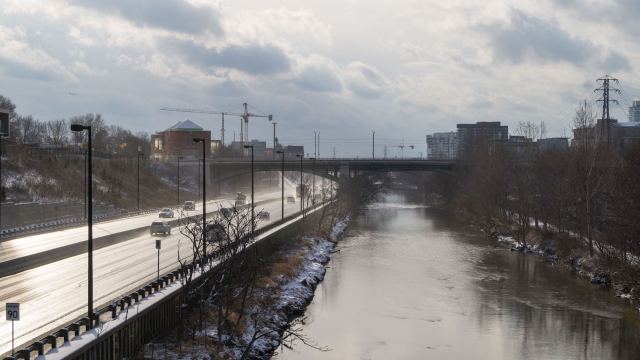 sunlight over the Don Valley 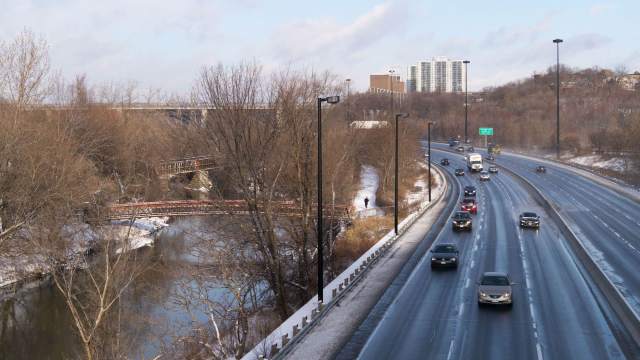 As we made our way back up to Broadview Avenue, we met a number of dogs, all of whom required Viggo’s attention! 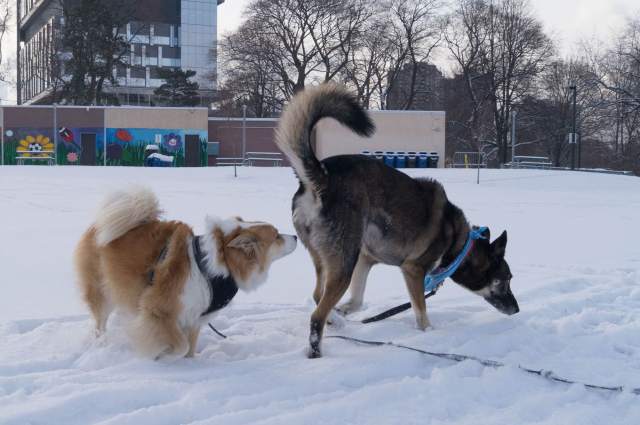 Viggo on a fact-finding mission

looking at the other great snow sliding hill – Broadview Avenue

As we came up to the top of the hill,  Joey saw us and came charging.  He associates Viggo – or whoever is walking Viggo! –  with the possibility of treats. Such enthusiasm! 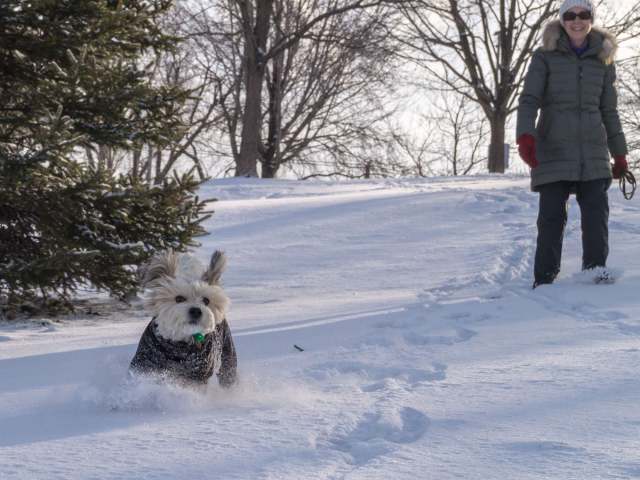 Joey bombing down the hill to meet us 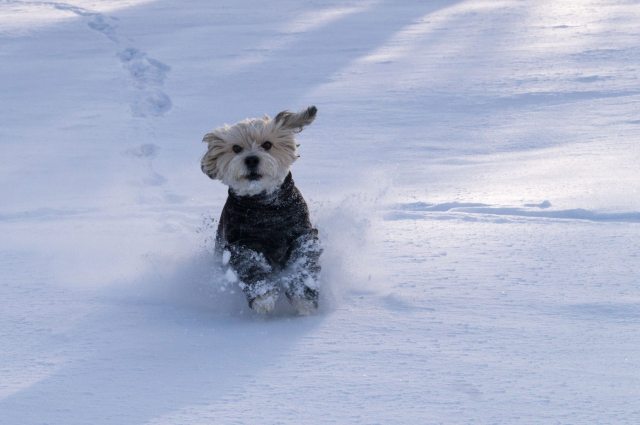 Joey zeroing in for the treat!

After a carry across the street, we walked by the Rooster Café. I like to check out the bon mot for the day.  A Homer Simpson quote, a line from T.S. Eliot, a Schopenhauer zinger – it is always a surprise.  Given the massive response to David Bowie’s death, I was expecting a line from one of his songs.  Not on this day – it was Saint Augustine’s turn on the board!

Broadview Avenue and the slush and salt

The Rooster Coffee House – checking out the saying for the day

The Rooster patio and snow-covered chairs 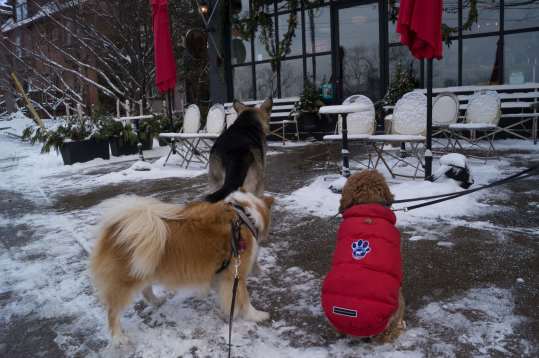 Viggo standing in solidarity with the 2 dogs as they attempt to stare their owners out of the café!

Update!  it is the next day and that David Bowie quote? Well, it was indeed on the sidewalk placard! I should have taken a photo and stuck it right here!

I don’t know where I’m going from here, but I promise it won’t be boring.

snow and cedar catch my eye

Almost home, we passed by Cosmo’s house and Viggo went up to the porch to say “hi”. 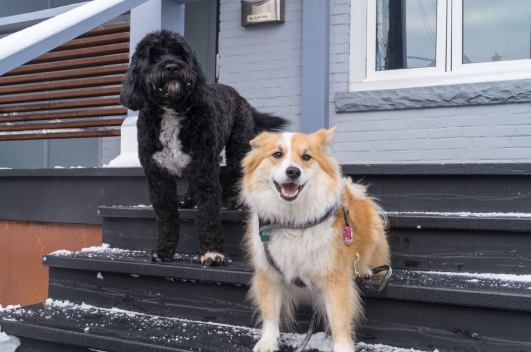 Viggo and his buddy Cosmo pose for a shot

And just we got to our house, who should pull up but John of Fit Dogs, a dog walking service (the very best of its kind).  Viggo’s part of a pack of dogs who get to romp on a fenced-in farm property north of Ajax on a weekly basis.  Here he is unsure whether to focus on me crouching in front of him or on John tugging him to the vehicle!

John and Viggo – and the other seven dogs – gone, I took a few minutes to deal with the two centimeters of snow covering our front walkway and the sidewalk in front of our property – all 17’4″ of it!

And there is my neighbour with a cup of coffee in her hand, heading for her waiting dog Shaemus in the car. They were off on their own walk in a different stretch of the valley trails.

We had spent an hour and a quarter on our walk. John had him for another three.  When Viggo came home at 3 p.m. he was ready to play!  Well, food first – but it didn’t take him long to pick up the ball he associates with our fetching game.  Finally, at four p.m. it was nap time for the Veegster. We would finish the day with another 45-minute walk at nine.

Tomorrow morning we get to do it all again – hopefully down in the valley along the banks of the Don. I better check the weather forecast –  I’m hoping for more snow!