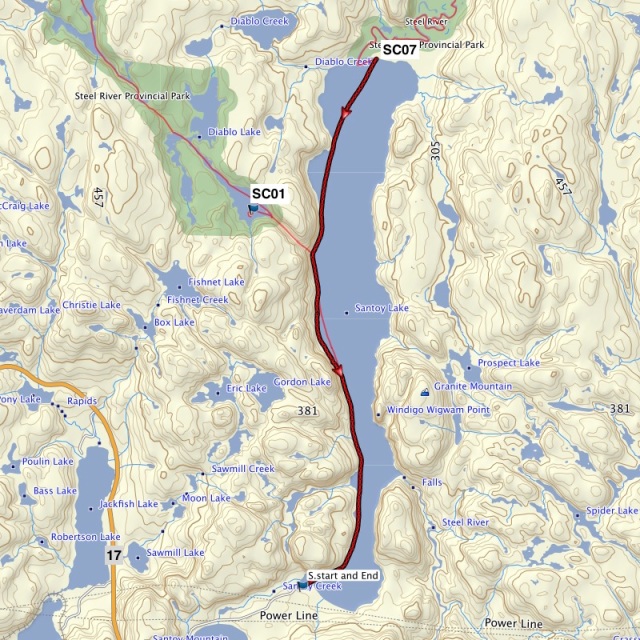 We woke up at 6 a.m. to the sound of heavy rain, which would go on for a couple of hours and then peter out a bit. It looked for a while like we wouldn’t be going anywhere as the wind from the southwest was doing its thing, and there we were at the north end of the ten-kilometer-long and narrow lake.

Already I was thinking about a possible wind day on Santoy when we got up around 9:30 – very late for us – and put up the tarp over the tent for extra protection. We also had breakfast and – importantly – our jolt of caffeine! Amazingly, the rain stopped, and the wind seemed to have died as we did all this.

We were expecting it to pick up again – but when it hadn’t by 10:30, we decided to take advantage of the interlude. We packed up, and by 11:30, we were on our way. The choppiest water we would face would be that in the first three kilometers or so – and it was nothing compared to the Temagami waves and wind we had dealt with on our previous October trip.

west shore of Santoy Lake in the mist

As our GPS track on the map above shows, we stuck pretty close to the west shoreline most of the way down. We would get to look at the start of the Diablo Portage one more time. The picture below shows the portage marker indicating the Devil’s Hole entrance! – to our three hours of “pain and suffering” on Day One. We accepted it as the entry fee to a week’s work of memorable paddling.

Paddling by our old friend, the Diablo!

It would take us two hours to paddle to the dock and the parking area at the south end of Santoy Lake. We had made the right call in packing up since the rain held off, and the wind was not an issue once down the initial open stretch. The images below capture a little of what it was like to paddle through the mist. 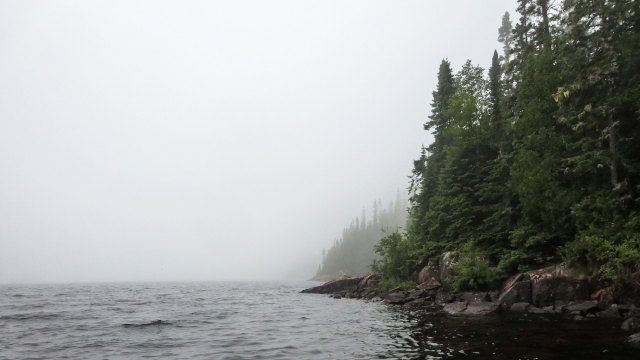 Santoy shoreline in the mist

As we approached the dock,  the rain, which had held off for the past two hours, started coming down – at first just a little and then a bit harder while we were getting the canoe tied down on the car. Still – no cause for complaint from us. At least we were not at the north end of Santoy dealing with a “wind and rain” day!

Santoy Lake boat at the dock

another view of the boat and dilapidated dock at Santoy Lake

Instead, we would be able to get back on the road and head east. How far we were not sure – but by ten that night, we were approaching Iron Bridge and the Village Inn Motel just east of the Soo. We had stayed there last summer after our Bloodvein trip, so we knew it would be a decent place to stop. We were busy until 1 a.m. cleaning up and repacking the bags for our next mini-canoe trip! 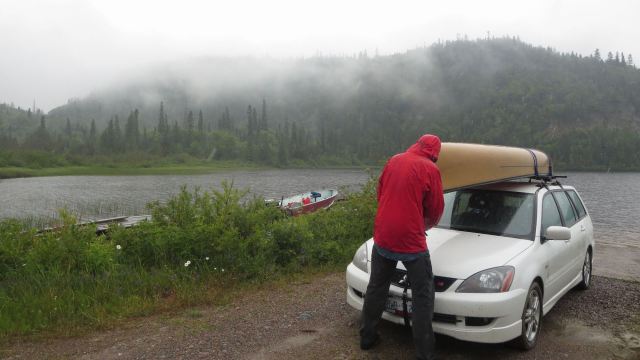 It’s not what it looks like! Max strapping down the canoe…

heading back east on a rainy day

We had initially planned to spend more time on the Steel River system – time to paddle up Eaglecrest and Evonymus and the northern stretch of the Park. However, the allure of more lake paddle faded after we were finished with Steel Lake, and we turned south at the Steel/Little Steel confluence instead.

Santoy Lake is not the end of the Steel River. From Santoy, it continues down to Lake Superior. There is a campsite at the top of a couple of twenty-meter drops unofficially known as Staircase Falls, which are found right where the river exits the lake. 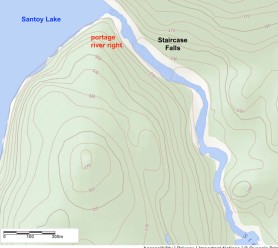 Norm Stewart, whose online trip report from 1980 is downloadable as a pdf file (here), makes the last stretch sound like a great ride. It also leaves you figuring out how to return to that vehicle at Santoy Lake! 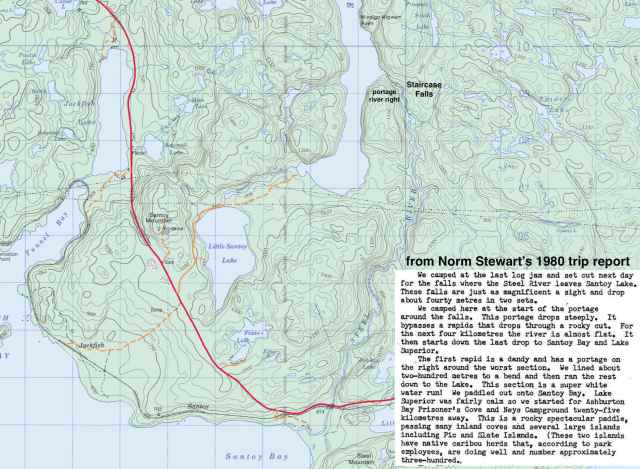 the Steel River From Santoy Lake To Lake Superior

While we had initially considered camping at the top of Staircase Falls and spending some time in tourist mode walking down the portage trail to the river with our camera gear, the weather told us to do otherwise.

Update: In August 2020, Jonathan Kelly paddled the final stretch from Santoy Lake to Santoy Bay and then over to a takeout spot on Jackfish Lake to the NW. Click on his Dropbox link below for his detailed 1.2 Mb pdf file of the map:

Conclusion: The Steel River As a Canoe Trip Choice

If you want to experience a compact one-week route with many of the pleasures and challenges of wilderness canoeing,  then the Steel River Loop may be the trip for you. Here are the main points that came to mind as we drove east from Santoy to Wawa in the rain –

To be fair, the Park is officially unmaintained, so my whining about the trails not being “maintained” is a bit off the mark!    Major thanks to Rob Haslam for his work over the years to keep the portage trails open. He has done the river a dozen times, which must be a record,  with 2007 being the last time he did major maintenance on the upper stretch.

Any clearing and marking by other trippers will make the Steel portages that much easier to handle for the next crew passing through. Even the bit of tape we put up seemed to make a difference to the two groups of trippers that followed up later that week. And we thought we were the only ones on the river!

Click on the title below for another perspective on the Steel River Loop.   –

Rob recounts a  trip he did in 2012, which begins from the north end at Eaglecrest Lake. I had never even heard of the Steel River before I clicked my way into this post back in 2012. This post by Rob was the seed of our trip!

It is six months later – late January – and I just got this email from my brother. He wrote –

Just in the process of rereading the Steel report – I’m game for another go!!

And you know what? So am I! The more I think back, the more I see a great little canoe trip!

Fantastic news! A four-man Anishinaabe (i.e.Ojibwe) work team just did some work – with chainsaws and all – on the portages that take you from Santoy to just below the south end of Steel Lake. I found the info in a Canadian Canoe Routes forum thread. The poster Speckling wrote this –

As we were about 300 m from the end at Diablo Lake I was stunned to hear a chainsaw working ahead. Turned out it was 4 fellows from Pic River (father, son and 2 others) that had been hired by the band to clear portages. They started at the bridge between Cairngorm and Steel Lake and were making their way out via Santoy Lake. The large log suspended across a rock pinch in the portage trail, that required threading your canoe through the space needle, is no more, and we subsequently sailed through without a hitch.

Further related to portage clearing, the 1st leg (800 m) of the portage from Diablo to Cairngorm was absolutely spotless and not once across the entire length did I hear so much as a squeak from the canoe touching anything! The guys did a real nice job on it… See here for the thread and scroll down to August 12, 2018.

And now, to finish off this canoe trip report!

We still had five days’ worth of food and were keen to paddle a bit more, so we decided to pass through Temagami on our way back to southern Ontario. We had done the paddle up to Maple Mountain in 2009 as a part of a longer canoe trip.

This time we figured we’d just paddle in from the Red Squirrel Road put-in and make a return visit to one of our favourite campsites – the one on Hobart Lake with all the qualities of a classic Canadian Shield site! Then we’d walk up to the Maple Mountain ridge with its memorable view of Temagami’s lakes below. The next day we’d get to Temagami around noon.

The Northern Scavenger blog has a very readable trip report from the following year – 2016 –  that is worth checking out.    Their post –  Steel River Loop – will also give you the lowdown on fishing. Lots of mention of catching brook trout and pickerel (walleye), including their personal bests in all categories!