weather: overcast and threatening to rain in the morning; mostly clear skies in the aft

rapids/portages: on paper an easy day

campsite: the plateau above “Lagoon Run”

Since we had two and a half days to get the final forty kilometres done, we were looking forward to a leisurely day or two.  It certainly started off that way.  Leaving Namay Falls  we took the left fork of the river and bypassed a couple of sets of rapids in the process. After a swift or two and a bit of lining,  we came up to Namay Rapids (W83) which we lined in a few minutes.  We were very pleased as we approached Kaokonapeekewonk Rapids – the short cut had proven to be the right choice and we had enjoyed the narrowness of the river and the rock-lined shore  through this stretch. 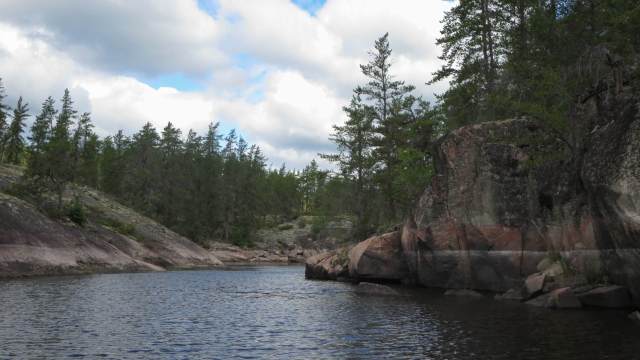 rock lining shoreline in the bypass channel on the Bloodvein

Next up was W84 …Kaokonapeekewonk Rapids – now affectionately known to us as K-O Rapids.  To the left was a nice potential lift-over over the ledge which avoided the worst of the turbulence. We took a quick look at the situation without going to shore and decided to run it down the middle as the Wilson map for this set of rapids suggests.

We did not, however,  make the also-suggested hard turn to the left.  The result? We got flipped by an incredible undercurrent on the right hand side . The canoe rolled over so quickly that  all the bags stayed inside even though they were not tied down. The current was such that we were swept downriver at a pretty decent clip.  The gps track shows the route – 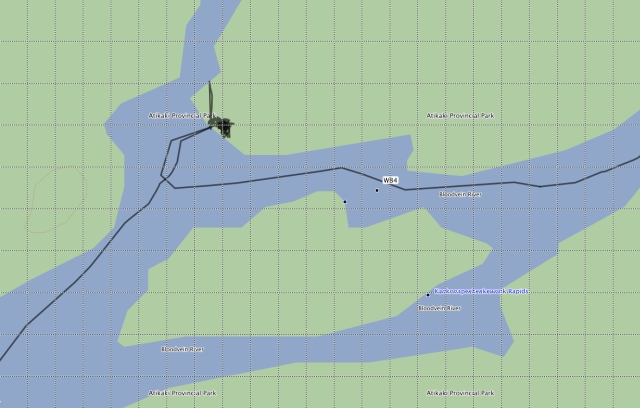 Down at the bottom of the rapids we were briefly stuck in an eddy that prevented us from reaching either shore without a major effort. In retrospect, we are really glad we had replaced our twenty-year old life jackets just this year with new Kokatats. They provided excellent buoyancy.  Once out of the eddy,  Max was able to swim to shore,  pulling in the canoe behind him.  He then paddled out to pick me up. I was looking around to see if I could see our two Tilley hats bobbing about. Then it was back to shore.

All bags accounted for – everything was there except for the hats – we hauled the packs up to the area you see in the pic below.  To top it off,  it looked like rain was coming so up went the tent just in case. Almost everything had escaped the twenty minutes we had spent in the eddy at the bottom of the rapids, trying to get to shore, any shore! 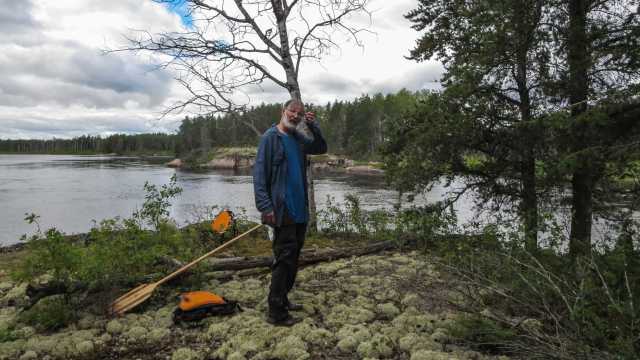 regrouping on the point at the bottom of K.O. Rapids – Max is missing his Tilley

For the next three hours  the wind dried our packs and anything else that needed to be. The waterproof liners that I had purchased from Hooligan Gear for their packs turned out to be what they were billed as.  This eliminated a whole bunch of worries.  Also effective  were the Pelican cases.  I had three of them – all proved to be waterproof, including my Pelican 1400 case with my dslr and a few lenses in it.  Whew!  We did, however, suffer two losses – Max’s Canon SX230 and my Sony digital tape recorder both got soaked and neither revived. His image files were later luckily retrievable from the memory card; lost were the entire trip’s worth of audio notes on various aspects of the river and  portage conditions. All in all,  it could have been worse.

By three we were back on the water, somewhat humbled by our experience.  As we paddled downriver, we looked for signs of our Tilleys bobbing in the water – but no luck. My Tilley had been my go-to hat since the early 1990’s when I first dipped it in the Ganges River at Varanasi. Unlike that elephant in the Tilley commercial, the Bloodvein decided not to give it back!  We did get to paddle by a moose a couple of kilometers above the next set of rapids

We pressed on, dealing with the portage in good time and then paddling another half hour down to what Wilson labels “Lagoon Run” (W86). His map note indicates a “choice view of rapids” and that is what we found. Like the Namay Falls campsite, this one begins with a steep initial ascent to the plateau and has room for dozens of tents up top.   While the rapids are not quite as dramatic as those at Namay Falls, it is still a very scenic slice of the Canadian Shield. The pix below show a bit of what it looks like. 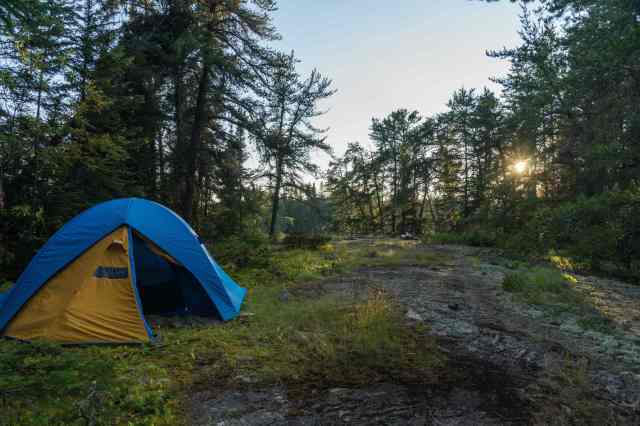 Day 15 tent site on the plateau above W86 Lagoon Run 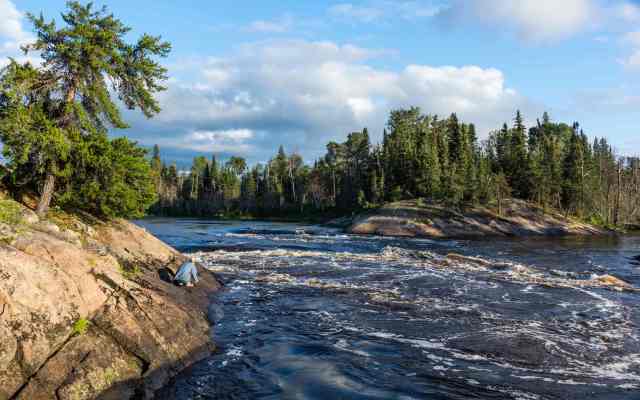 the Lagoon Run rapids (W86) on the Bloodvein 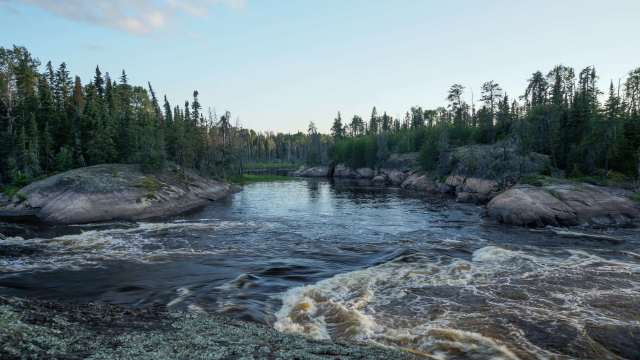 Lagoon Run on the Bloodvein – side view

A fifteen-kilometer day with an unexpected bit of drama –  happy it was done with,  we were both chastened and relieved that it hadn’t been worse.