Artery Lake – the ultimate pictograph lake – sits on the Ontario side of the border in Woodland Caribou Provincial Park with just a bit of it in Atikaki Park on the Manitoba side.  For canoe trippers doing the entire length of the Bloodvein, it represents both an end and a beginning. 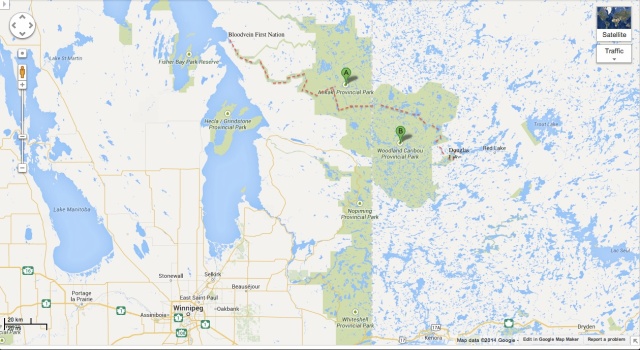 our route from Douglas Lake off Red Lake to Bloodvein First Nations village on Lake Winnipeg – Artery Lake sits right on the Manitoba-Ontario border. Click on the image to enlarge!

It is the end of the headwaters section of the Bloodvein River.  We had spent almost a week paddling across Woodland Caribou Provincial Park from Douglas Lake. The six kilometers or so of portaging in the first three days and a wind that was often blowing east meant we had paid some dues to get to Artery. The hours spent on some very scenic flatwater stretches had been our reward and paddling by two major pictograph sites of the entire Canadian Shield was an appreciated bonus.  But now we were in for a different trip.

Artery Lake is also where the Bloodvein as a river, as opposed to a series of lakes joined by the occasional narrow channel,  begins. From Artery Lake to Bloodvein Village there are 80 sets of rapids to deal with.  Sloping or vertical granite rock face lines the shoreline – sometimes on one side and occasionally on both –  and creates that closed-in feeling that makes river paddling special. As for portages, we would do half as much during the ten days from Artery Lake to Lake Winnipeg as the six kilometres we did in the first two and a half days of the trip through the headwaters. We were looking forward to the change!

weather: cloudy with a wind from the NW in the  morning with a bit of sun later on

campsite: above W14.  We called it the Fineview; it was our best campsite so far.

In the original plan,  Day 7 had been set aside as a spare/rest day on Artery Lake.  We decided that instead of sitting around for the day on Artery we would put in a leisurely day on the water and see how far we got.

Before we headed downriver we had one more Artery Lake pictograph site to visit. We paddled up the north arm of the lake about two kilometers, passing a battered cabin on the east shore –

As we looked up the lake shoreline we were not seeing much of that essential ingredient of any pictograph site – a bit of a rock face!

looking up the north arm of Artery Lake

We had the location for the site – taken from the Wilson map – entered as a waypoint on our GPS units.  We eventually did paddle up to a section of rock that definitely stood out from the reeds and otherwise flat shoreline.  Scanning along the rock we noticed the following –

A bit closer and it looked like we had found what we were looking for. To the right of what almost seemed like an entrance into the rock face for the maymaygwayshi who were believed to live there, were a few ochre markings. The images were barely discernible  – see below for what looks like a crudely drawn Thunderbird (?) and an arch with lines or figures standing on it.  There were a couple of other vague marks but that was it.

This humble site was more in line with the site on Red Lake and the one at the east end of Murdock Lake that we had seen earlier in the trip.

We didn’t know it at the time but the site at the east end of Artery Lake that we had visited the day before – see here for some pix and discussion – would be the #1 site of the trip.  This makes it that much more of a “must-see” for those canoe trippers flying to Artery Lake for the beginning of their down-the-Bloodvein adventure.

Wanting to make sure we hadn’t missed something, we paddled another half-kilometer up the arm,  checking out a couple of other rock faces but we came up empty. Then it was time to paddle back down the shore across from where we had camped the previous night and on to the Ontario/Manitoba border as it crosses Artery Lake. 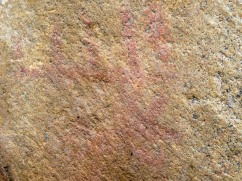 canoe pictos below the “star” – click on images to enlarge

As we rounded the corner and headed west we noted the vertical granite on our right and remarked that this would make a much more obvious – and dramatic – place for someone to place a pictograph than the dead-end north arm of the lake we had just checked out. Sure enough – we paddled by the rock paintings you see above. Perhaps the small stick figure represents a maymaygwayshi? The very common canoe image is faded but visible, even if half the canoe seems missing! 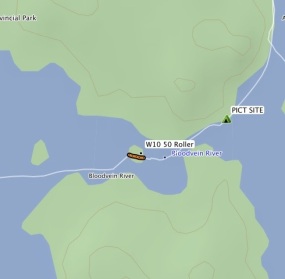 Three hundred meters further on we came to our first portage of the day – W10.  We had been curious about exactly what the fifty-meter marine rail involved and now we got to make use of it.  In a little more than a minute, we had dragged our canoe over and were on the west side of the island in Lower Artery Lake.  There we saw a couple of fishing boats.  We waved as we paddled by but they were some distance away. They were probably staying at the Jackson’s outpost about 2.5 kilometres further down the lake which we paddled by a half-hour later. 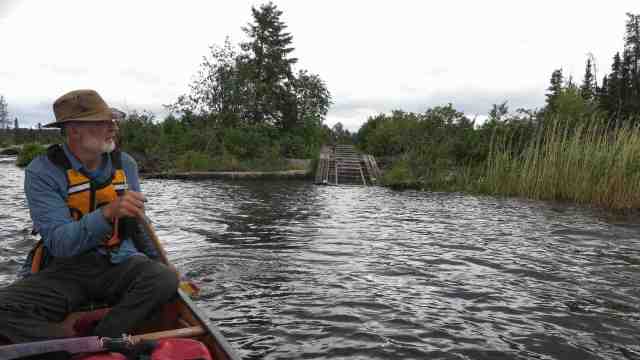 W10 – the marine railway – the view from the bottom

rapids to the north of the island with the marine railway

A bit more paddling and we came up to the Ontario/Manitoba border; it was marked with the signs below. 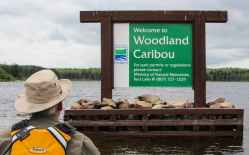 the Jackson’s outpost on the Manitoba side of Artery Lake

We relied on the Wilson/Aykroyd maps for all of our rapids/portage info. As I have noted elsewhere we’ve numbered the rapids the way they appear in the Wilson book (that is where the W comes from).

Also appreciated on the entire Manitoba stretch of the river was the orange prospector tape which indicated 95% of the upcoming take-out points.  While the Wilson book provides the info and it was usually pretty obvious, it was still reassuring to know that we were on the right track.  Unlike the purist who huffs and puffs as he takes down all the orange tape he sees, we are not offended by these “heads up” indicators!

Using the Wilson drawings of the various rapids as a starting point and adding our own assessment of the situation after a quick look, we came up with one of three or four answers; at one end was  “let’s run it”; at the other was “let’s hoof it”. Lifting over, lining, running/lining and other combinations filled the in-between options. After the first three days in WCPP, it was mostly a piece of cake.  (Spoiler alert: we would make a lazy call a week later at W84 and get to test our new Kokatat life jackets, as well as the “waterproof” pack liners and Pelican cases!) 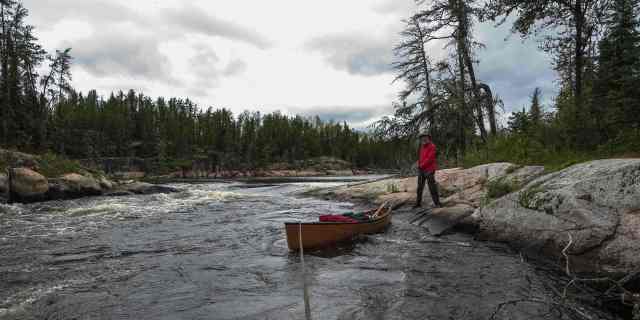 down the Bloodvein – lining W13

Near the end of this day’s paddle, we approached “The Jumping Rocks” on river left. It is a 15-meter high rock face with a vertical split separated by about 3 meters of empty space. According to Wilson’s trip notes, there are Ojibwe stories of people jumping the gap. Maybe a test of manhood in the tradition of bungee jumping in Polynesia? More likely just a tall tale told to a gullible non-Indigenous listener for whatever reason. 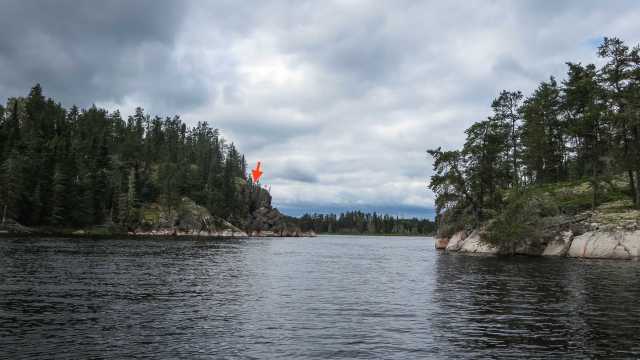 coming up to the split rock

approaching the split rock with the gap visible 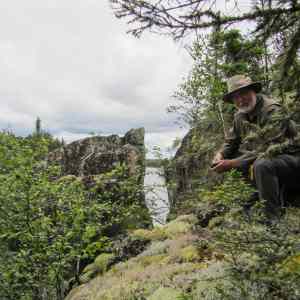 looking back upriver through the gap

looking downriver from the top of Split Rock

the view west from the top of the rocks

Not long after our brief pause to take in “the Jumping Rock” we were back on the river for the last stretch of paddling. Fifteen minutes later we pulled up to the take-out spot above the set of rapids you see in the pic below. Our first day in Atikaki was done and it had turned out to be a nice day after a not-too-promising rainy start.

The excellent campsite (we called it the Fineview for the vista it provides) sits on the flat top of a hill and is a 40-meter walk along a trail above the rapids named “Moosebone” by Wilson/Aykroyd.

“Moosebone” Rapids (W14) on the Bloodvein

Since we had stopped in the early afternoon we had lots of time to scamper about and point our cameras in different directions. A few of the shots can be seen below. 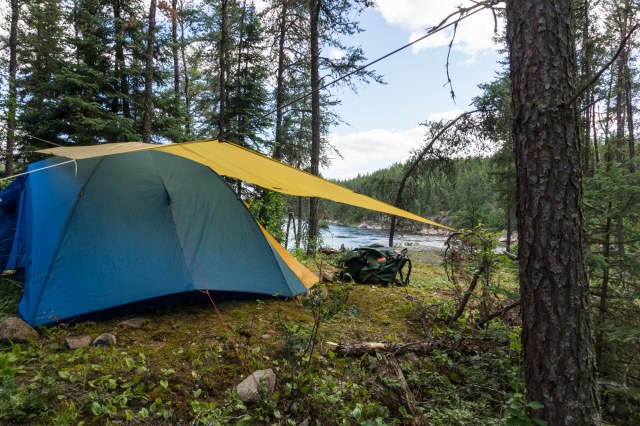 checking out the view from the campsite above W14 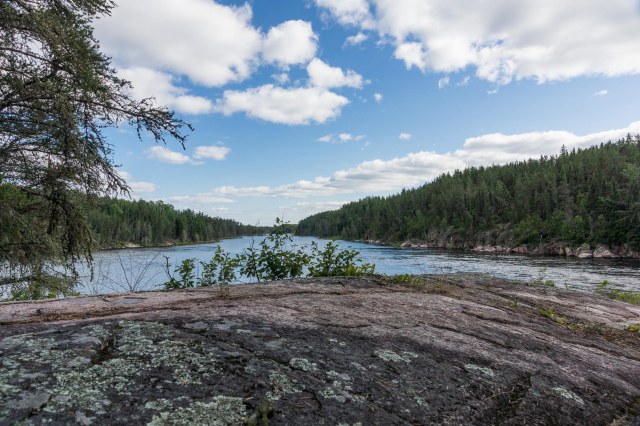 the patio at “Fineview” – looking down the Bloodvein 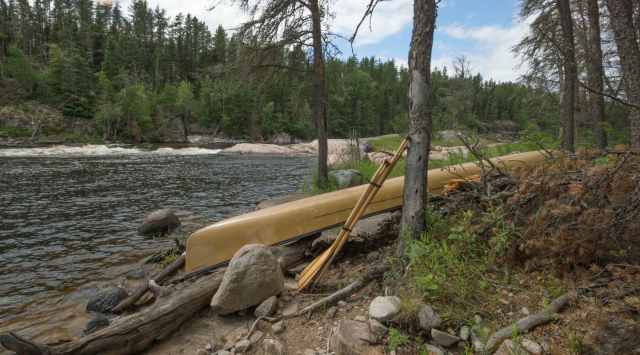 canoe at rest at Moosebone Rapids on the Bloodvein

This entry was posted in Pictographs of the Canadian Shield, wilderness canoe tripping and tagged bloodvein river canoe trip. Bookmark the permalink.