Skonsa and Viggo in the back yard

All images enlarge on a new page  with a click!

Skonsa and Viggo – you wouldn’t figure that they belong to the same litter, the litter of four pups that Soley had back in Toronto in early June of 2009.  But here they are almost four years later – Viggo at 14.5 kg and Skonsa at 7.7 –  in our backyard watching the birds sitting on the fence top.

Their father Max lives the good life in Maine by the seashore, having been re-homed after his original owners in Iceland let him go. Here are a couple of shots of Max in action – 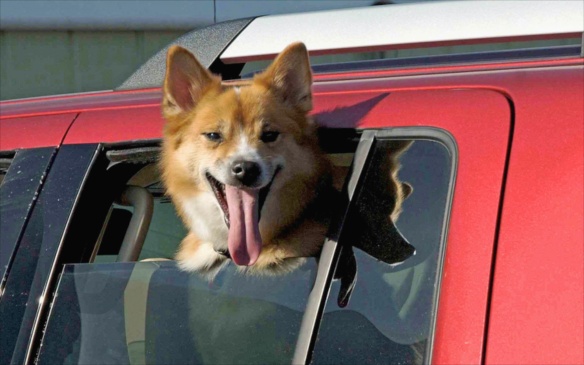 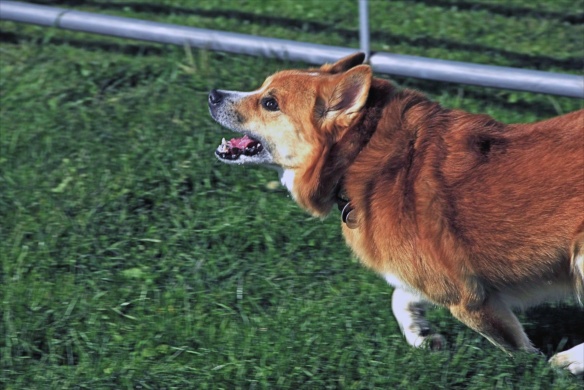 work to be  done, cars to be chased – Max on the go … Viggo obviously comes by it through Max

Soley, the mother,  is the queen of the Riverdale-area Icelandics, having produced three litters and a total of fourteen offspring.  Here she is with Tindra, a female from her first litter –

After a successful week-end rendezvous in January of 2009 in a suburban Montreal motel – the half way point between Max’s home and Soley’s –  the countdown began for the arrival of Soley’s second litter. You can see the results below.  At the “milk bar” is a clearly visible Skonsa.  Also in the pile-up are Viggo and Trek, with  Sigga, the second female, on her own to Soley’s left.

Laila followed the antics of the pups daily thanks to the live video cam stream which Laura and Scott provided.  We had no idea which pup we would be getting, but Laila did develop a sympathetic bond with Viggo.  For some reason the other pups  always seemed to be ganging up on him. Little did we know the little hooligan that we would be getting!

Trek and Viggo as pups

Here is one of Viggo with mama Soley taken a year later when Viggo had grown out of his puppy look!

And here we are over three years later –  and Skonsa came over to our house with another Icelandic named Tinni for two or three  action-packed “Tuesdays with Tinni”.  We were not sure what to expect; I just multiplied Tinni’s barking by three and figured that would be fairly accurate guess. I mean, they’re Icies after all!

Well, it wasn’t like that at all! Yes, Tinni and Viggo barked – but Skonsa didn’t! Our first impression was of a delicate and petite Icie who was content to curl up in our laps – almost like a cat. While she continued to be super-friendly with the humans, she was an instigator of play with the boys and worked on getting them to chase her. Here is Tinni applying a classic wrestling move  while Viggo watches –

Viggo and Skonsa monitor the action on the street

Skonsa is an Icelandic word which literally means “pancake” – but not much point in trying to read anything into that! It is just a pretty name.

tug time in the living room

Tinni and Viggo with Skonsa in the background

Skonsa and Viggo on the patio 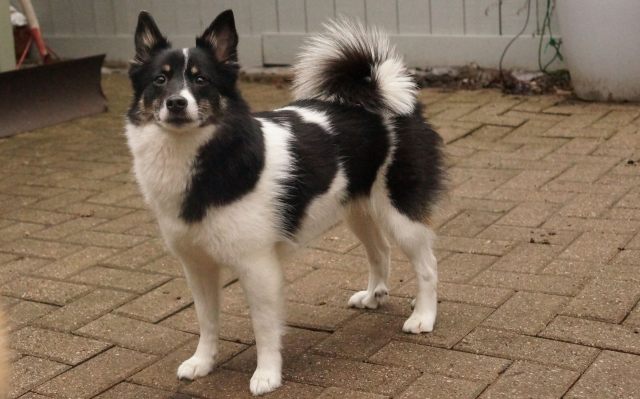 the boys have unfinished business to attend to – Skonsa wants back in!

Skonsa – one happy (but not yappy) dog

Skonsa has now moved on to her wonderful new home down in New Hampshire.  The news  from her new owners was great to hear but given what we experienced on three different Tuesdays with Tinni not really a surprise – she’s fit in very quickly and  is now part of a  pack of four other icelandics and an Australian Shepherd and her new owners love her. In true Icelandic fashion, she does seem to have  found a bit of a bark

Solhundur is the name of Scott and Laura’s kennel. Check out their blog here for lots of pix and info about Icelandic Sheepdogs in general and about the litters of delightful pups they have sent out into the world.

Take a peek in the link above called Viggo’s Den if you haven’t had your fill of Icies yet! Caution – they are addictive.  I sometimes pretend that we should have gotten the pug that Laila first proposed – but knowing what I do now I can’t imagine having a dog other than my hooligan Viggo on the end of the leash as we ramble ’round Riverdale.