Eastern Ontario Bicycle Tour Plan: Toronto to Ottawa via the Side Door!

for pix and details of the actual trip.

The classic bicycle tour from Toronto to Ottawa follows the shores of Lake Ontario to Brighton, takes the scenic detour through Prince Edward County to Picton, and then heads to Kingston. The trip ends with a great ride up to Ottawa with the Rideau Canal as the backdrop.  It makes for a glorious trip with some little-used country roads to cycle and lots of accommodation available at the end of every day.

Having already cycled the Lakeshore road from Toronto to Kingston and on to Montreal three times, I decided to approach Ottawa a bit differently this time. Instead of approaching Ottawa from Kingston, I’d come at it from the northwest – kinda through the side door!

A Chance To Visit Old Friends

The planning for this trip started with the decision to take up my friend Ed’s invitation to visit him in Bancroft.  I’ve only visited this part of Ontario a couple of times- and those times were on cross-country skiing outings during the winter- so the route would allow me to see this stretch of Ontario in the summer for the first time in thirty years!

More than a bit of nostalgia is also involved- I plan on cycling down the main street of  Peterborough and taking a first look at a town whose Trent University had been one of those on my list at the end of high school some forty years ago.   And Ed in Bancroft? He had been my high school Chemistry teacher in 1968!

To add to the yesteryear feel, I decided to make Port Hope my first day’s destination with the intention of visiting Ken, the man who had hired me for my first high school teaching job in Scarborough in the mid-70s.  He is also the guy I credit for getting me off my butt and into exercise mode back in the day.

But wait- there’s more!  I’d get to overnight at my sometimes cycling and all-around buddy Cyril’s in Kanata– when he was still living in T.O. we’d done a memorable ride from Sudbury to Espanola to Manitoulin to Tobermory and back to Toronto via Niagara Falls in 1991. He said he’d grill something veggie for me!

And if everything falls into place, I’ll drop in to see how my canoeing partner Roy is doing. His wedding in Ottawa in the mid-1980s is the last time I was there.  So the route was set- a nice blend of new geography and old friends!

In planning my trip – maybe just like you are now! – I did google “Toronto-Ottawa bicycle trip” to see what other cyclists had posted online.  There are more than a few posts!

Among them, I found this organized tour from Toronto to Ottawa offered by cyclecanada.com which is actually a pretty good deal, especially if you don’t want to be bothered with all the logistical details.  I also found a tour on their site- a ride from Montreal through the Eastern Townships and then up to Quebec City- that I have bookmarked as an interesting future possibility!

In the end, my vintage chro-moly steel-framed 1990  Miyata 600GT, a classic touring road bike,  gets to go again!  (At least I think it is 1990; the ’90 edition is shown in a grey colour in the 1990 Miyata catalogue but the colour is given as “horizon blue”.)   Since I bought it in 1991 the original Avocet saddle has been replaced by a Brooks B-17; the tires are now 32mm Continental and a Shimano 14-34 “megarange” freewheel!   The toe clips have also been replaced by Shimano’s A520 spd-shoe pedals.

I’ve bicycled across most of Canada with it.   It did an 1100 km tour of eastern Cuba in January of 2012;  it’s done Tasmania and New Zealand. It’s been around!

(See the Bicycle Touring folder for the ongoing adventures of the 600GT!)

on the side of the road near Holguin, Cuba – my Miyata 600GT with front and rear panniers

I had been tempted to go ultra-light for this tour and take the sports car equivalent of my bike fleet-  my carbon fibre Trek Madone with the Dura-Ace wheelset. However, the lack of a rear rack to hang the panniers on made me turn to the station wagon once again.  Here is the same touring bike barely clamped to the bike rack at the front of the GO Bus bringing me back from Hamilton on the Sunday before this trip. I had cycled the 83 km there as a warm-up. As you can see from the image, there is only one arm on the front wheel holding it down.  I was somewhat nervous about the wheels getting bent as the bus sped along. I’m glad to say the set-up works! 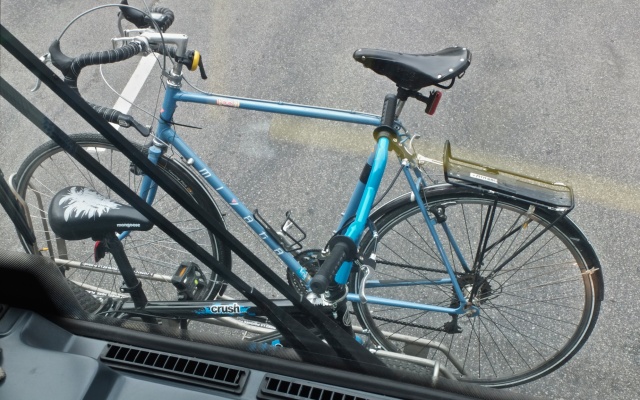 The bike rack set-up did not inspire confidence- but it worked out just fine!

Unlike my Cuban tour, this trip will not require the front panniers; a handlebar bag and the two rear panniers will provide all the space I need for my eight-day tour. Unlike on previous adventures, there will be no tent or sleeping bag or cook set along for this ride. My VISA card will be playing a much more prominent role! Before I left I pre-booked most of my accommodation.  Somehow I like knowing that there is a bed already waiting for me at the end of the day; all I have to do is get there!

I love starting my trips from Toronto early on a Sunday (8:00 a.m. is the plan!) because I know the city will still be sleeping as I put on the first twenty or thirty kilometres.  I’m out on the quieter roads beyond the city before the shopping malls are open and the cars are out in full force.  Click here for a Google map of my first day’s route to Port Hope.

Having followed the Waterfront Trail east from Toronto a few times, I now avoid parts of it as too indirect and dipsy-doodle-y and downright annoying at times. Sunday morning on Kingston Road and Highway 2 is really not a problem. The final stretch along Lakeshore Road to Port Hope is always a treat.

Today’s ride involves a  lot of Country Road 28 N- all the way up to Peterborough and then on through Lakefield to the night’s cottage accommodation at Merrick’s Landing, a short distance off of 28. Lunch in downtown Peterborough,  a few stops along the way to check out the Trent-Severn locks that happen to be nearby, a ramble with my dslr along the shore below and up to Burleigh Falls, and perhaps an evening paddle past the various islands at the east end of Lower Buckhorn Lake just above the falls.  What a great day! See the route here.

Burleigh Falls is on the southern edge of the Canadian Shield in this part of Ontario. Time will tell what exactly this will mean as I cycle up to Bancroft. It is definitely a less populated stretch of road. Click here to see what the route looks like.

This is the biggest day of the trip- 131 km along a stretch of road that looks pretty empty of services.  I will stock up on lunch before I leave Bancroft. I’ll find out what the northern end of County Road 28- which runs into and becomes Highway 41 at Denbigh- is like as it pushes north towards Renfrew. Paved shoulders and not too many hills would be nice- but we will see.  Waiting for me is a plush room at the Renfrew Inn. Here is the road I’ll be on.

On to the nation’s capital! I’ve got a room at the Econolodge on Rideau Avenue in downtown Ottawa but the trip to get there is going to be fantastic. I am especially looking forward to the stretch along the Ottawa River as I get close to the downtown. Cyril tells me that my route from Renfrew involves some pretty quiet backcountry roads- all in all, a fine day’s cycling awaits with some good photo ops along the way.

Today I get to cycle back along the river along the path I used yesterday to get to downtown.  Same, same…but different!  The Ottawa area looks like it is well-equipped with bike paths so it should make for some stress-free riding as I head to Cyril’s in Kanata. I’m going to make this a leisurely ride if I can. Here is a crop of a very informative The 2019 Official Cycling Map for Ottawa-Gatineau (click on the title to access) put out by the National Capital Commission that shows some of the possibilities and my intended route into downtown Ottawa and then back to Kanata.

Another Sunday- and another great day to put on some early kilometres!  In retrospect, I could have made Kingston the endpoint and made a point of following the Rideau Canal all the way. Maybe next time! Click here to see the very nice route I get to do.

Homeward bound- the easy way.  The mid-morning train takes baggage so for an extra $20. I get to put my bicycle into a box that VIA provides and then sit back for three hours as we zip back to Union Station in downtown Toronto.

Post-trip correction: This particular VIA train apparently has a bike rack so you are not required to box your bike.  It still costs but at least you are spared the need to take off the pedals, loosen and twist the handlebars to the side, and remove the seat. It means that when you get to your destination you can wheel the bike right from the platform with no fuss.

See here for the Via list of routes where you do not have to dismantle your bicycle before putting it in the baggage car.

Thanks to an afternoon spent with a copy of Waterfalls of Ontario– text by Mark Harris and photos by George Fischer- I am motivated to come back home with some shots of the waterfalls and rapids that I will be passing by or cycling over.  What follows is a list of places I will be looking for:

What I’m Taking Along:

(not that you’d want to bring along exactly what I did! )

Post-Trip Note: Well, the trip is history! See June 2012 Toronto To Ottawa to Brockville Bicycle Trip Report for pix and details of the actual trip.

The wind and a bit of rain presented challenges to deal with (i.e. accept!). The day-by-day plan was followed except for the stretch from Bancroft to Renfrew. I ended up splitting it up into two half-days, leaving Bancroft at 1:00 and getting to a Denbigh b&b around 5:00 one day and then rolling into Renfrew around 2 the next afternoon after an 8:00 a.m. start.  It made for a leisurely bike tour through a scenic part of my own province that I had never really looked at before.

It was an enjoyable little bike tour made even better by getting to see friends I have not seen in a while.

7 Responses to Eastern Ontario Bicycle Tour Plan: Toronto to Ottawa via the Side Door!