Festive Lights: My Toronto in Mid-December 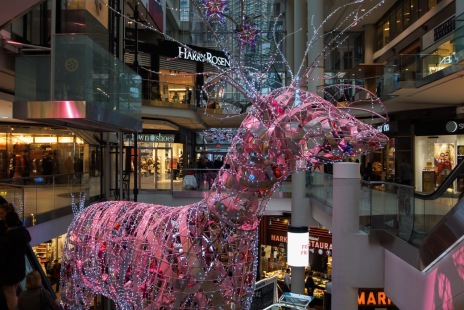 Note! My Toronto is only a small slice of an urban sprawl referred to as the Greater Toronto Area.  I rarely venture north of Bloor, west of Bathurst, or east of the Beaches. The Danforth from Broadview Avenue to Pape  is my Main Street!

Temperatures have been unusually mild in Toronto this week.  Mid-afternoons it got up as high as 11ºC and no one is talking of a white Christmas.  Still, the Christmas decorations are up, especially in the shopping malls. Residential streets are slowly being lit up. This Friday afternoon (two weeks before Christmas Day) I passed by three Riverdale houses in the process of being festooned with strings of lights and other Xmas artifacts.

Notably absent from both the private and public displays is anything of an overtly religious nature.  Christmas trees, lots of coloured lights, candy canes, reindeer, ribbons of red and green…that seems to be the way to go!  I did, however, include a church or two in my list of places to photograph. First I cycled over to Church Street and Shuter, just east of the Eaton Center and  St. Michael’s Cathedral (Roman Catholic).  Unfortunately, the church was closed for what looks like a massive renovation.

Then I cycled down to St. James Cathedral  (High Anglican) on King Street at Church Street, thinking that it might have a Baby Jesus In the Manger display. It is a special place I visit occasionally for its stillness.  Alas, no manger to be seen.  It may not be an Anglican thing to do.

candles – and a Station of the Cross on the pillar – at St. James Cathedral on King Street

Then it was off to the Eaton Center.  It was about 3:30 so I figured I’d do some interior shots while it was still light out and then head to City Hall at 4:30 when the lights come on.  The Eaton Center did not disappoint.  It has lots of decorations to get the expected hordes of shoppers in the right mood!  If a culture reveals its deepest values by the nature of the buildings it invests a lot of capital putting up,  then shopping malls R us! 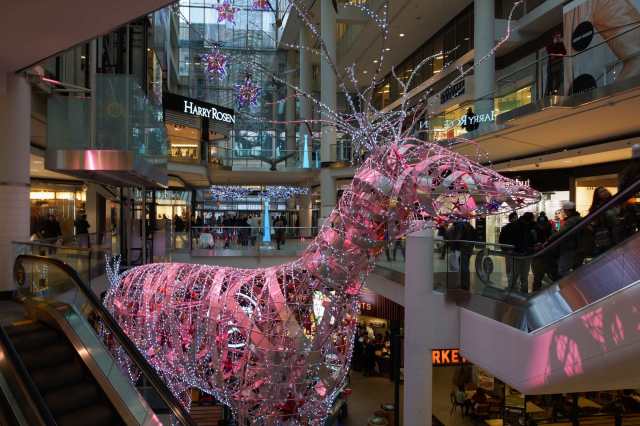 Xmas reindeer at the Eaton Center

The tree looks like the same one that the mall has had since 2012, only with the colour changed from the original pink.  It has received mixed reviews over the past three years, with some critics pining for a more traditional – and real – tree. (See here for a Toronto Sun opinion piece.)

As I framed the next shot I couldn’t help but think of another Bible story – the one about the Golden Calf fashioned by the Israelites while Moses was up on Mount Sinai getting the Ten Commandments!

one of the reindeer in the 2015 Eaton Center Xmas display

The Eaton Center is a wonderful space and the Michael Snow geese installation at the south end cheers me up every time I walk into the mall.

The Display Windows At the Queen Hudson Bay Store:

Next up was a quick visit across the street to the Hudson Bay store’s Christmas window displays.  A few years ago, both the Yonge and Queen Street sides of the store would have displays but given the renovations going on at the corner, only five windows on the Queen Street side were decorated with whimsical reenactments. Here are a few of the scenes that caught my eye – 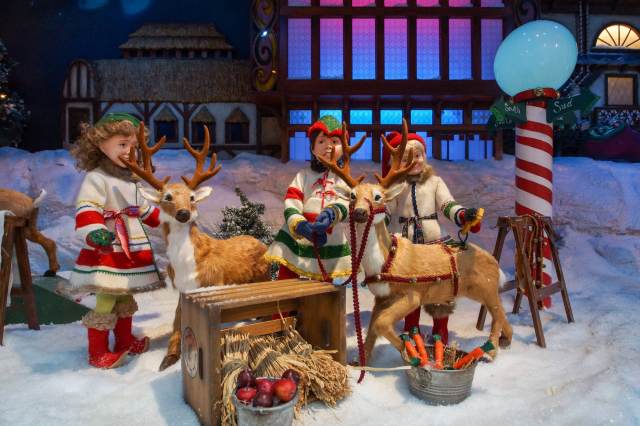 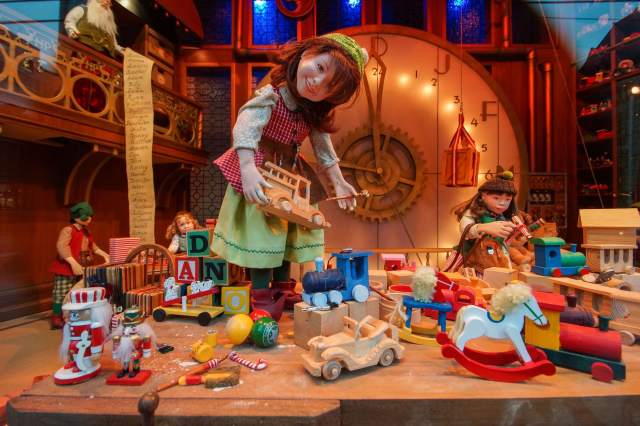 Santa’s workshop with some vintage toys ready to be wrapped

three mice wrapped up in their Bay blankets

Before I headed for City Hall I cycled up Yonge Street to Dundas Square on the south-east corner.  It wasn’t quite dark enough but this is what I found – 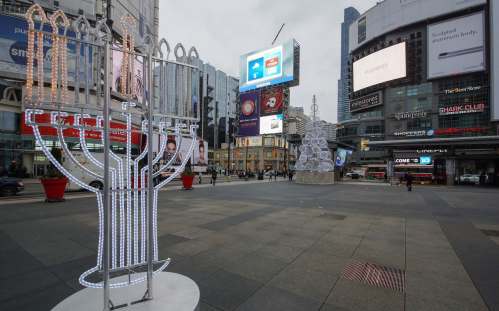 The Jewish nine-branched menorah (i.e. the hanukiah) was a nice touch and an actual religious acknowledgement. When I returned a couple of days later two more of the candles were lit.   Here is what a change in light can do for a photo!

Dundas Square after dusk a couple of days later

The Christmas Tree – with its pre-Christian Germanic cultural roots – stood at the other end of the square.

Two days later with darkness it looked like this –

City Hall Square gets the full light treatment each December. I was looking forward to lots of lights to make what is already a pretty neat public space even more magical.  It would be all that!

The early Christians could not have picked a better time for the birth of their Lord and Saviour than late December. They took the existing Roman festival of Sol Invictus (the Unconquerable Sun) and turned it into a celebration of the Son of God’s incarnation into this world.  At the very time of the year when daylight is at its shortest,  Jesus is born.  Add to that the manger story and you’ve got a powerful narrative of hope.

However,  as with ancient Rome and the early Christians,  an existing festival has been repurposed so that it fits with current cultural values and needs. The tree with its lights has become the central symbol.

Standing in the square is a real tree – and a really tall one at that! As you walk towards Queen Street you approach the skating rink and the TORONTO sign that magically turns snapshots into postcards! 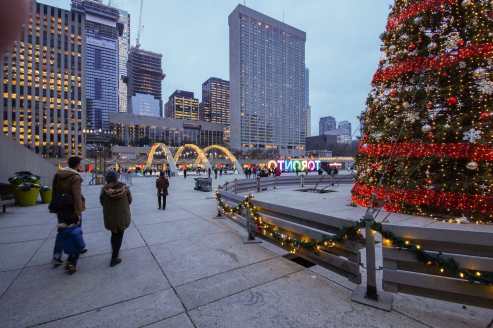 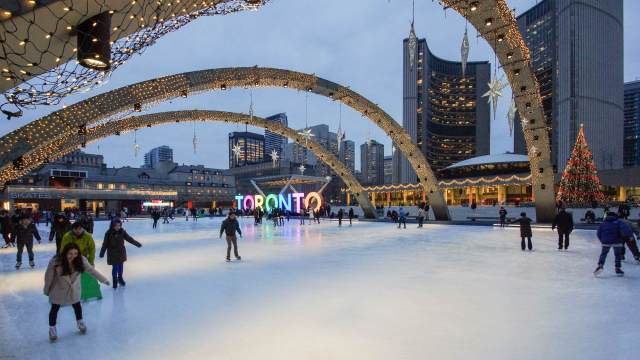 Getting another Toronto icon – the CN Tower – required a bit of backtracking. I walked back up to the Tree and went up the ramp a short distance to frame this shot – and ended up noticing the Hanukkah candles- with one more lit than the display at Dundas Square!.

looking south towards Queen Street from the Tree

It was now getting dark and I had foolishly left my bike light at home on the dining room table. I did make my way home on some well-lit one-way streets with my rear red light blinking all the way.  But first, I stopped for a few minutes at the Distillery District. It was a Tuesday so it was free to get in – as opposed to the $5. they are now charging weekend visitors! 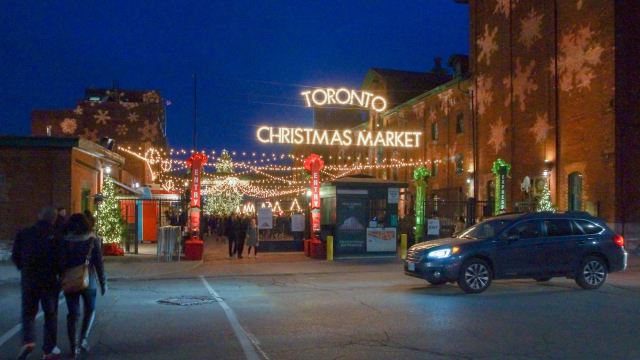 Distillery District –  approaching the entrance of the Christmas Market 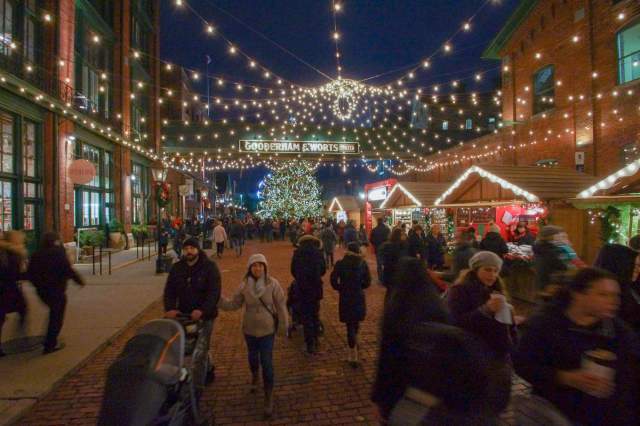 Distillery District – looking down from the main entrance to the tree

It was already too dark to capture any good shots but I upped the iso to 3200 and did wander around, taking in the scene. I was surprised at how many people were there on a weekday night. Maybe “free” is a real incentive? 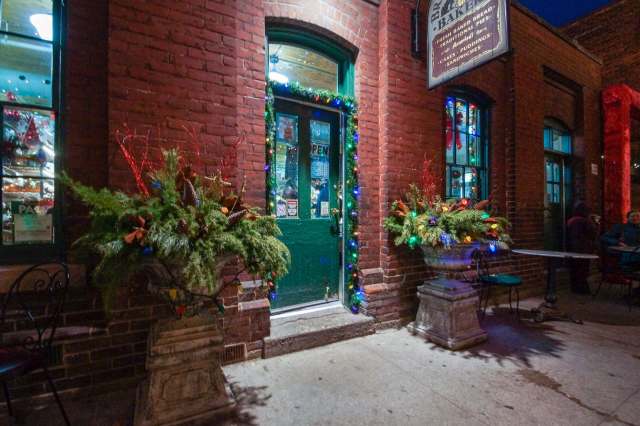 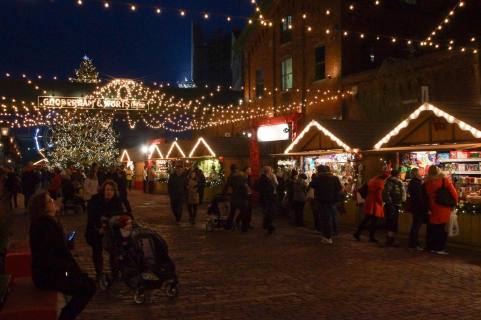 Back into the dark – and on the bike! – I headed home with one last detour. A ride along the Danforth to pick up something at The Big Carrot and I remembered the little Alexander Square at the corner of Danforth and Logan.  I’ll have to visit again when it is a bit less dark out but here is what I found –

Shopping at The Big Carrot done, it was down Broadview Avenue past one of the great views of downtown Toronto.  I had to stop and snap a few hand-held shots. 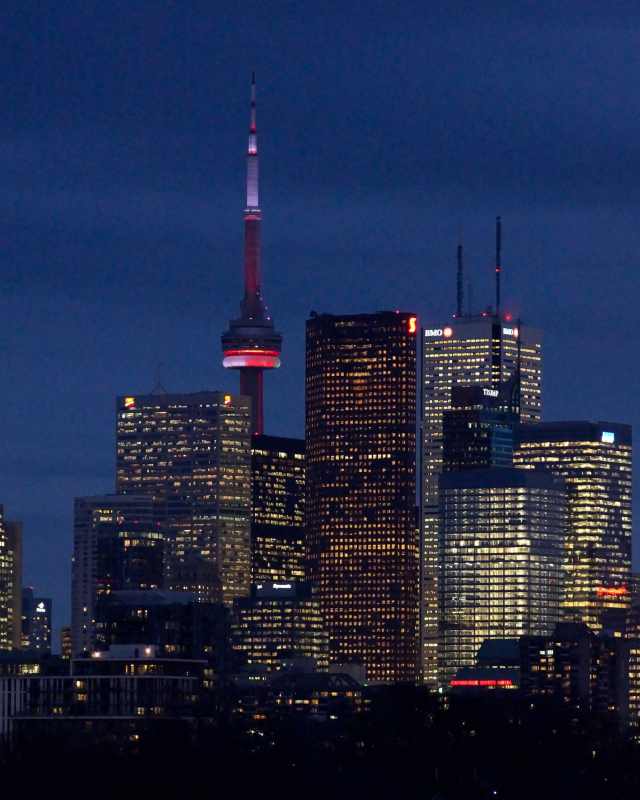 close up of downtown buildings – the Trump Tower included!

I pushed my bike across the street and wheeled by The Rooster Café, stopping to get the blurry shot you see below.

It had been a fun afternoon cycling around my Toronto and looking for festive lights to photograph. On following days I would head out again to see what I could add to the collection.  I’ll post right here some of what I found in the next few days.

What has happened to Hazelton Lanes?  Since it is not really my kind of shopping mall – I feel more at home at stores like Europe Bound and Mountain Equipment Co-Op or Home Depot! – I will admit I rarely visit. But I do remember – is it really forty years ago? – a much more vibrant and alive space than the construction site I found when I visited a couple of days ago. If not for Whole Foods the mall would be dead!

I saw as many guys with hard hats on my quick visit as I did shoppers at the upscale clothing stores that are still open.

Yorkville Avenue at dusk in December 2015

Yorkville – the Lane to Cumberland Ave. 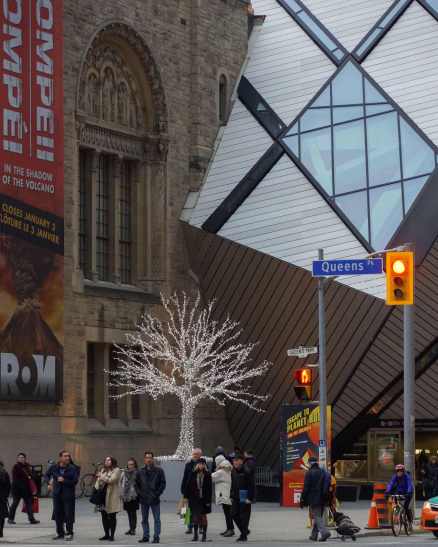 Christmas Tree at the ROM 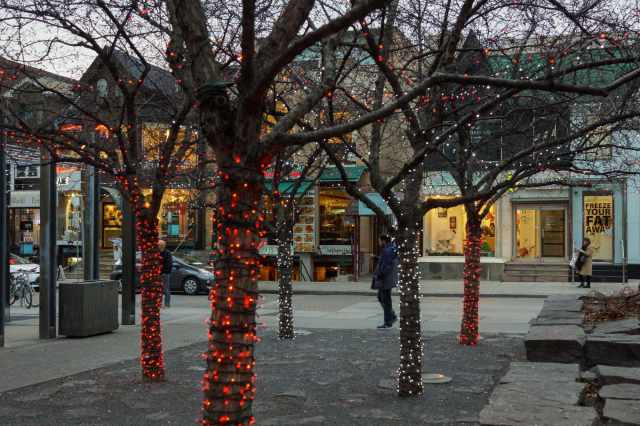 Yonge Street From College To Dundas:

Looking south from Yonge and College

Looking Up Yonge Street from south of Dundas 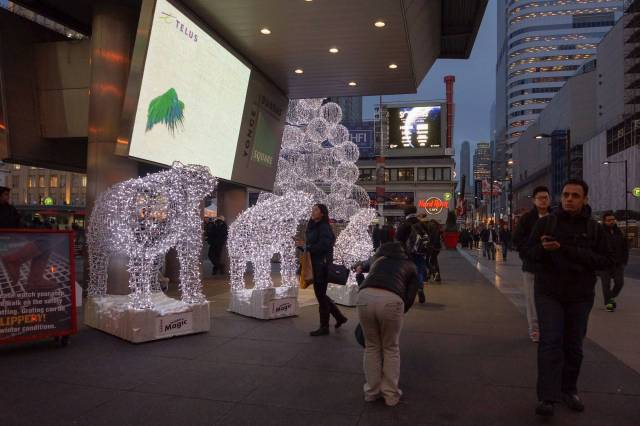 The Bloor-Danforth Viaduct has a barrier on each side to prevent suicide attempts. Called The Luminous Veil, it recently was completed when the lights were added to the steel cables.  The photo below shows the stream of traffic heading up the Don Valley at the end of another work day in the towers of downtown Toronto. The traffic southbound is a bit more sparse.

the Bloor-Danforth Viaduct – the Luminous Veil

The Luminous Veil up close

Still on my shot list are the following two locations: the Beach(es), especially along Queen Street and Harbourfront.

In the meanwhile, if you can think of any festive light spots that I just need to get to, let me know!

Links To Other Sites:

Just before I started uploading the photos this evening I checked my WordPress Reader for blogs I follow. One of them is by Doug Taylor and it focuses on Historical Toronto. Well, wouldn’t you know it!  Earlier this week he posted the following collection of images which he titled Downtown Toronto’s Five Best Xmas Displays. Click on the title to access his post and then check out some of his other ones. They make for great reading for anyone interested in the architectural history of Toronto.

It is December 12 and above freezing temperatures are predicted for the next two weeks. That means no snow in the forecast!  December 2014  was a very different story.  See the following post for the evidence!

7 Responses to Festive Lights: My Toronto in Mid-December