Blowin’ In the Wind: An Appreciation of Tibetan Buddhist Prayer Flags

prayer flags in Kathmandu around a neighbourhood shrine

The morning ritual involves freshly ground coffee and a seat at the kitchen table.  Then I look outside past the thermometer and my eye catches the colours of the Japanese Maple and the contrasting spruce. And slicing right through are the colourful and vibrant flags. I take in the scene and feel a calmness- all is right with the world. 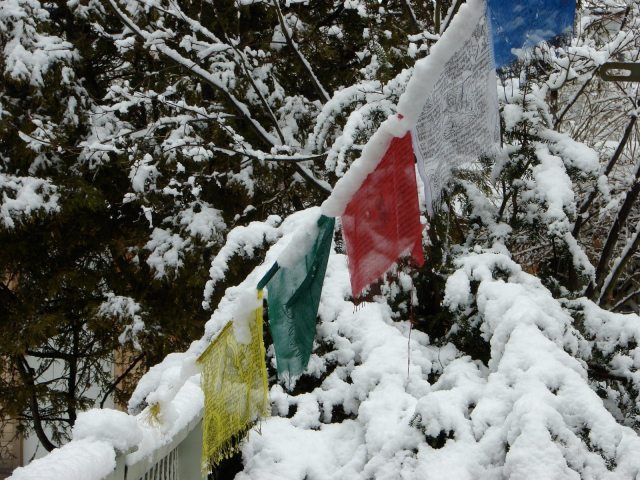 “Same, same, but different” – our backyard prayer flags in the snow 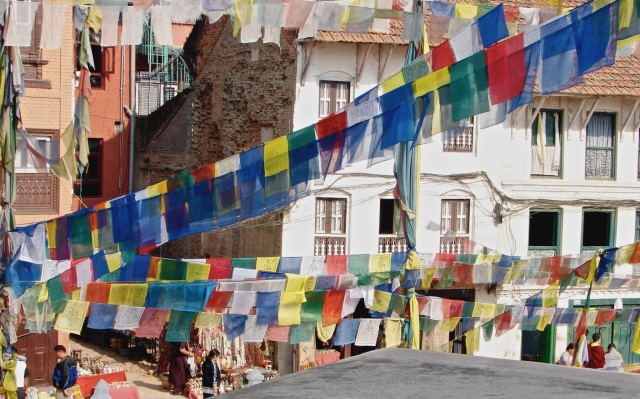 flags tumbling onto the square around the Bodhnath Stupa, one of the major shrines in the Tibetan Buddhist world

elephant guard on the north steps of the Stupa at Bodhnath

The flags are associated with Tibetan Buddhists; they adapted a pre- existing Bon religious tradition. On the flags which the Bon priests used, Buddhists imprinted their prayers and mantras and sutras (extended prose pieces from the holy books) .

Five colours are used in stringing together a prayer flag: blue; white; red; green; and yellow. On the flag, you find images of iconic Buddhist figures and a script which is a Tibetan adaptation of the one that Buddhist monks from India brought with them some one thousand years ago.

As I was putting together a series of posts on my walk in Sagarmatha National Park in NE Nepal  (The High Passes of Everest Trek posts), I was initially struck by how often prayer flags popped up in my photos. A moment’s thought about what it was I was framing in my viewfinder- mountain peaks; temples; stupas (chortens is the Tibetan term) and cairns on the path; – and I realized I should have even more images with flags in them! 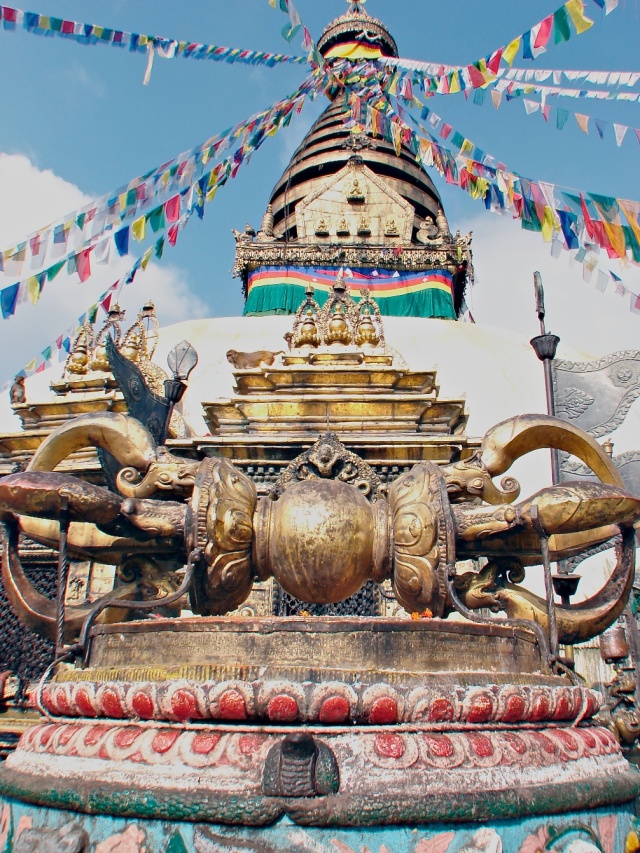 The Tibetan belief is that the winds blow the positive energy of the prayers and chants imprinted on the flags into the world- and into all sentient beings that the winds touch.  As a result, you’ll usually see the flags strung in high places where they can have maximum effect.

flags radiating from the crown of the stupa of Swayambhhu

What follows is a collection of my pix with prayer flags in them. Most are taken from hikes in the Annapurna and Khumbu region of Nepal, but you’ll also find flags fluttering in Patagonia, near Jasper in the Canadian Rockies, above the heads of chanting monks in Bodh Gaya in India, in the Christiania area of Copenhagen in Denmark, and in my Riverdale neighbourhood above the eastern banks of the Don River in Toronto. Perhaps those pix will become cyberspace-prayer flags whose positive energy enters the lives of all whose eyes they touch? 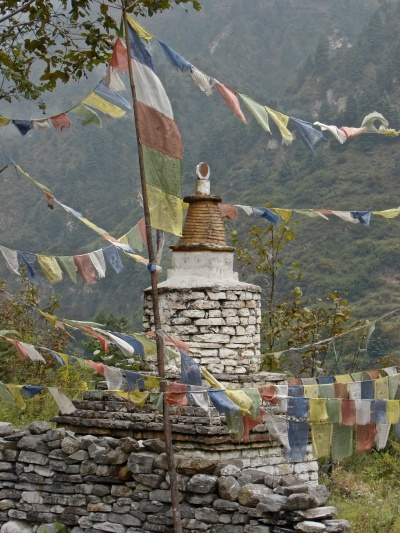 village chorten (stupa)  on the Annapurna trail near  the Marsyangdi River

temple with a halo of flags on  the Annapurna trail

flags drape a bridge over the Marsyangdi River

flag colours decorating the pillars of a temple near Manang 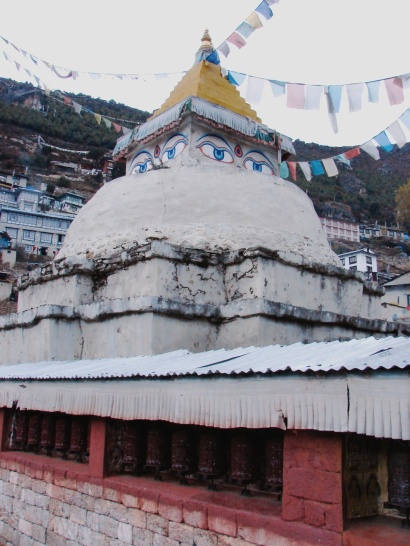 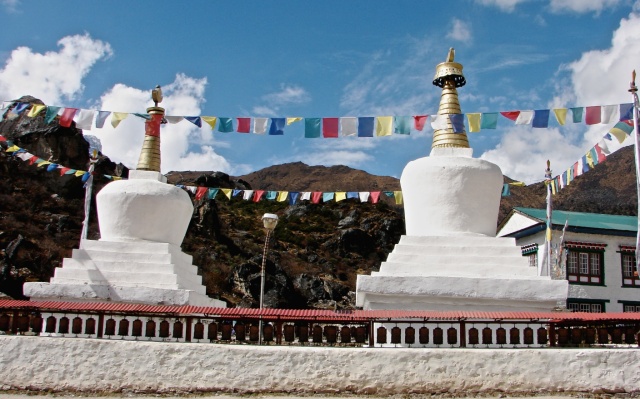 stupas and flags at Khumjung above Namche Bazaar 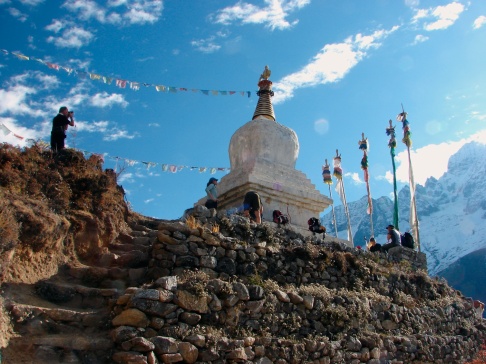 stupa and flags on the way to Tengboche Monastery

flags in the hills above Dingboche 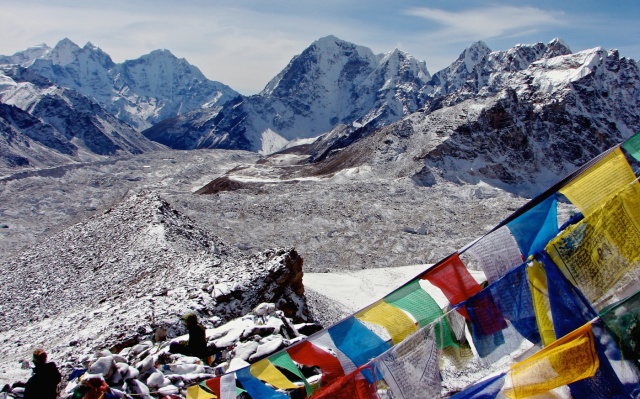 view from the top of Kala Patthar above Everest Base Camp

flags blowing on Gokyo Ri, a peak to the west of Everest

looking down on Gokyo lake and lodge below Gokyo Ri top

from Renjo La pass looking back at Mount Everest 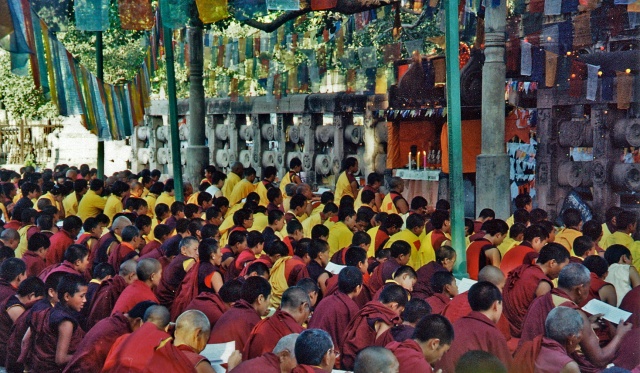 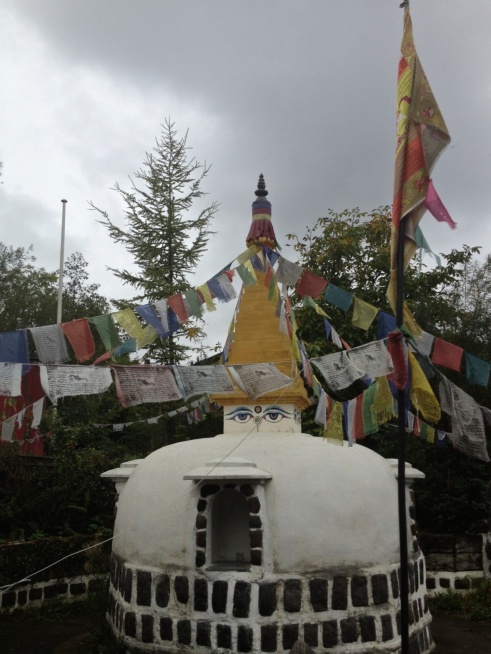 a touch of Nepal in the Christiania district in  Copenhagen, Denmark- received in an email from my wife yesterday! 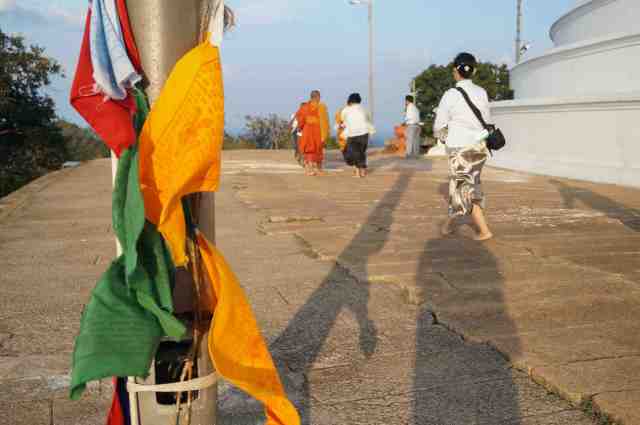 Tibetan prayer flags at Mihintale near Anuradhapura in Sri Lanka 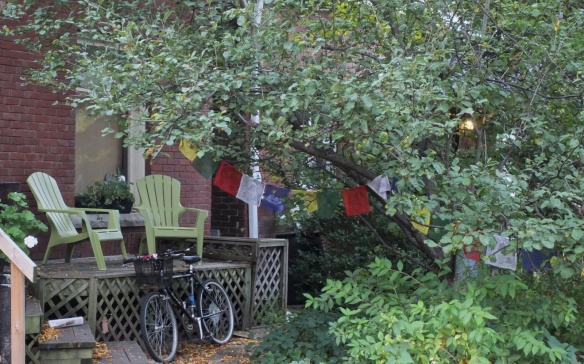 While my head tells me that the notion of prayers being blown off the flags by the winds and into the lives of all sentient beings is nothing but a bit of inspirational fantasy, my heart says “And what’s wrong with that?”

Each colour represents an element in the rather elaborate Tibetan Buddhist iconography and each colour has various traits associated with it.  The following was culled from the internet and from Robert Beer’s Handbook of Tibetan Buddhist Symbols. Let me know if you find any other good sources of info on what all of this means- I’ll add it to what is below.

close-up of a prayer flag- Windhorse and sutra 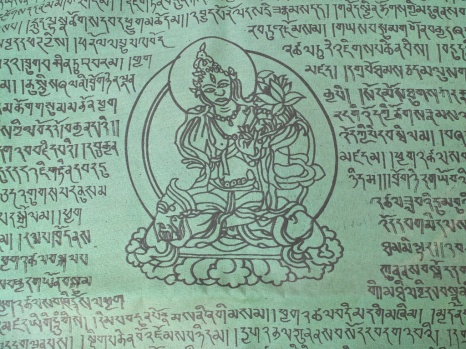 This Wikipedia article has some good background information and lots of great pix. More discussion can also be found in this article.

A visit to Youtube turns up all sorts of interesting tidbits, including this brief introduction to prayer flags. 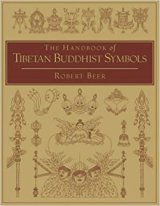 Tibetan Buddhist iconography makes a colourful field of religious expression to examine in further detail; there are many scholarly studies out there to help you in your exploration.

I’ve got a paper copy of Robert Beer’s Handbook of Tibetan Buddhist Symbols which writing this post has prompted me to pull down from the bookshelf. You can read a Google preview of the book here.  There is a Kindle version available at Amazon for a few dollars!

2 Responses to Blowin’ In the Wind: An Appreciation of Tibetan Buddhist Prayer Flags