Previous Post – Day One: The Coulonge Headwaters From From Lac Larouche (Km 271) To Lac Grand (Km 252) 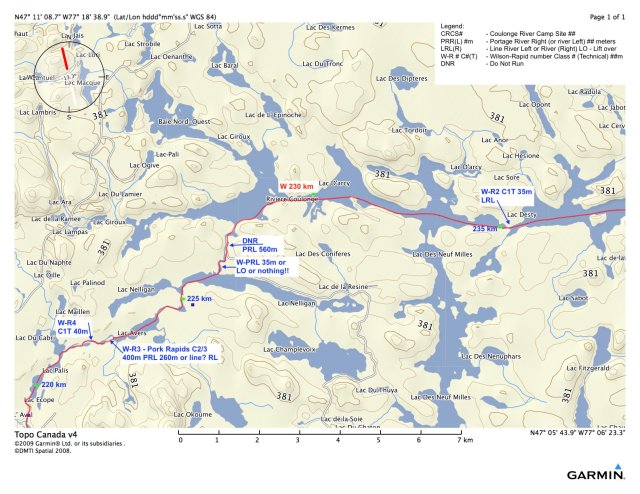 A very nice Day One campsite to start the trip – and a beautiful morning to start Day Two as we loaded up the canoe for the move downriver.  We were hoping to do 25 or so kilometers, campsites determining the exact stopping point. Pork Rapids looked like a potential target.

The two pix below illustrate the sloping bank down to the water. As we pulled away I got a last shot of the flat camping area above the steep bank. 2.5 km to the west was the narrow channel leading out of Lac Grand and into the first of a number of headwater lakes we would be paddling this day.

the view of our Lac Grand island campsite from the water

The lower late-season water meant we lifted, lined and scraped our way through the stretch between Lac Grand and Lac Nichotéa.  You can see the view from above and below the set of riffles in the two pix below.

the Coulonge between lac Grand and Lac Nichotéa 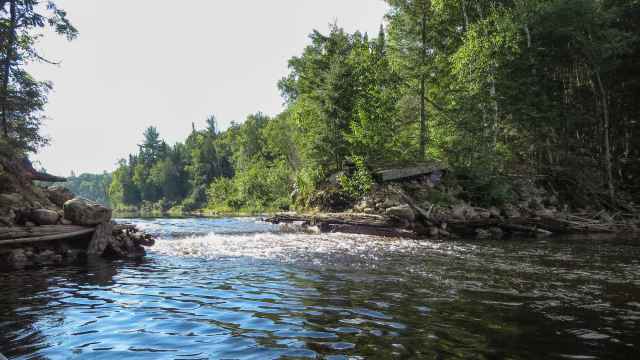 We had pushed off from our island camp at about 8:30.  Two and half hours later we were approaching the remains of a bridge crossing at the point where Lac Nichotéa narrows and runs into Lac Desty. 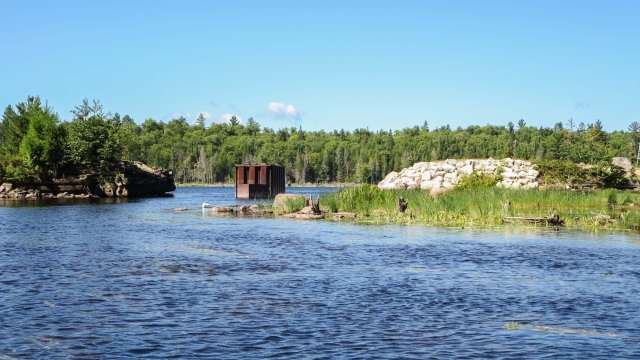 approaching the remains of a road bridge between Nichotéa and Desty

Another hour’s paddling and we got to the next lake in the day’s string of lakes – Lac D’Arcy.  We were also glad to have stopped at the island campsite because we definitely did not see a lot of choices as we paddled through Nichotéa and Desty.  D’Arcy would be no different.  The image below captures the basic shoreline of the various lakes we paddled through – very little rock outcrop and lots of bush right down to the water.

At our lunch stop on the south shore of Lac D’Arcy’s east end, we watched as the five-canoe party from Day One passed us.  It was a summer camp group led by two guides – a male and a female both in their late teens/early 20’s – and eight mid-teen girls; they were also on their way down to Fort Coulonge.  We wished them all the best.

Amazingly, they would be the only canoe trippers we saw on our eleven days on the Coulonge.  We had expected that our time on the river would be punctuated by frequent encounters with other canoe trippers.  We were thinking it would be more like Temagami or Algonquin!  Maybe the mid-August time period is not the most popular? Who knows?

Our short break was followed by an hour’s paddle to the west end of the lake and the narrows that lead into Lac Giroux. There is an island as you come into Lac Giroux. Wilson describes it in glowing terms in the Coulonge chapter of his Ottawa Valley tripping guide.  We saw a rather small island with few mature trees on it – not quite what we had pictured. The summer camp group had stopped there – either for their lunch break or to make camp for the day. We waved and paddled on, heading for the channel that leads down to Lac Nelligan. 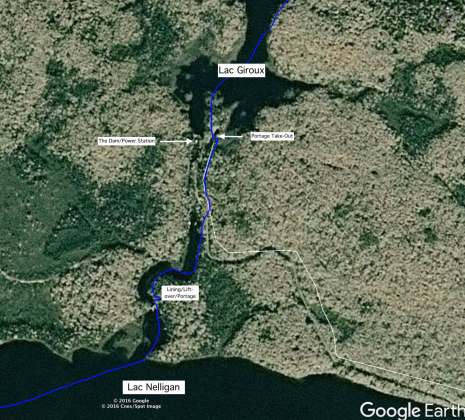 By 2:30 we were approaching the dam/power station pictured below.  The portage trail is on river left and runs for 400 meters down to the bottom.  At the top is an area which could host a tent or two if necessary. 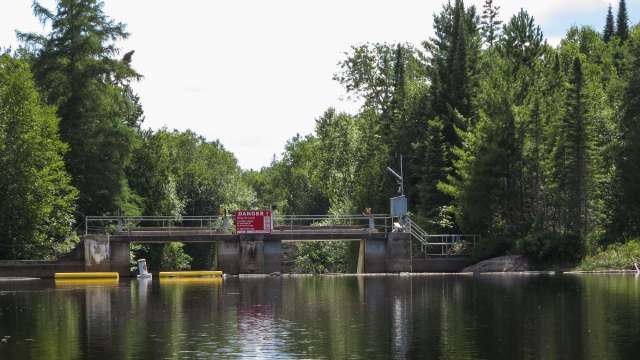 approaching the dam between Lac Giroux and Lac Nelligan

portage time at the dam before Lac Nelligan

We walked on to the power dam – it is run by Brookfield Renewable Power, the same company that owns the Chutes Coulonge facility at the other end of the river- and got a view from the top. Then it was time to hoof it down the portage trail, the first stretch of which is on a dirt road before it veers to the right and then back down to the river.

looking down the Coulonge from the Lac Giroux dam

the river left portage trail into Lac Nelligan from Giroux 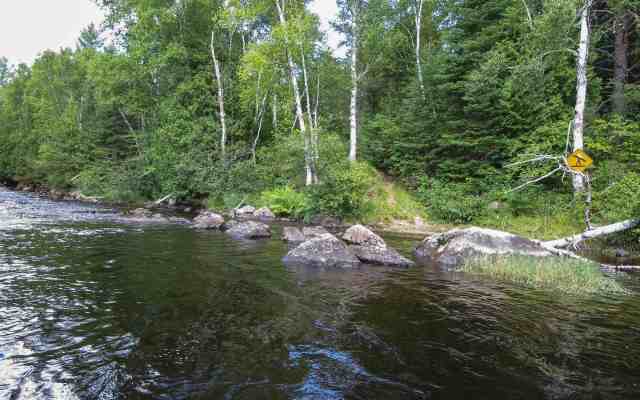 far end of Coulonge portage into Nelligan from Giroux

Not too far from the put-in around the dam was another obstacle – the chute pictured below that required another portage.  All told, we spent about an hour doing the two carries to get from Giroux to Nelligan.

bottom of a small chute into Lac Nelligan

Next up in the “Work” category – the portage around Rapides Pork. It is Rapid 3 in the Wilson trip guide.  We spent about 30 minutes on the 400-meter carry and then decided – even though it was already 5 p.m. – that we’d paddle a bit more.  I guess part of it was that we weren’t exactly smitten by the campsite choices at the end of the Pork Rapids portage.  We figured that something better had to be just a bit further down the river – a hopelessly optimistic notion that we keep falling for!  Just another kilometer or two for something much better will be the reward!

So, bye-bye Pork Rapids.  We’d paddle for almost another two hours before we stopped for the day!  By then we were in Lac Ward, having passed by kilometer after kilometer of camper-unfriendly shoreline.  We had also stopped taking photos – so no pix from 3:45 to 8:15!  No Pork Rapids, no nada until our tent was up at Lac Ward.

Still unclear to us is whether you need a camping permit for La Vérendrye.  We had decided not to bother dropping into the park office at Le Domaine off Hwy 117 on our way to the put-in on Lac Larouche. No signs anywhere along Route 117 indicated the need. 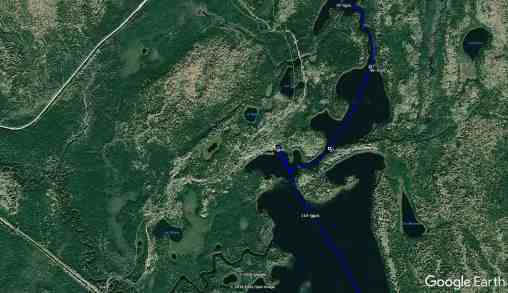 As we got to the sand beach in the small bay at the top of Lac Ward a vehicle pulled up at what we now realized was a small parking lot with access to the sand beach boat launch.  Out of the pick-up came a couple of uniformed guys – park employees of some sort.  We were fully expecting them to ask about our camping permits but our brief chat never got around to that topic!  They took out their lunch kits and watched as we put up our tent and got our butane stoves and supper fixings out.  And then they were gone and we were left on the edge of a parking lot with a campsite that would have to do – even if the illusion of being on a wilderness canoe trip was somewhat spoiled.

The Google image above shows that two major logging roads – #20 and #28 – as well as some minor side lanes pass on the west side of Lac Ward.  We looked at the Wilson map and saw that the campsite was indicated with the letter M.  Only when we got back home and checked the legend (p.20 of Rivers Of The Upper Ottawa Valley) did we find out that M did not stand for “medium” but rather for the “mediocre” that it was.

However, when you’re paddling until 6:45 you’re happy to find anything with a flat space. On the plus side, there was a picnic table that we made use of to keep stuff off the sand. A search around the immediate area did not turn up a “thunderbox”,  somewhat surprising given the site’s use as a boat launch.

The 36 km we had covered this day were more than expected and it meant that we’d be leaving the Réserve La Vérendrye the next morning.  We’d also be leaving the Coulonge River system’s headwaters for the drama of some seventy sets of rapids and innumerable swifts.  We had lost about 50 meters of elevation in our day and a half paddle across the park.  Over the next ten days, we’d negotiate the 700-meter drop from Lac Ward to the Chutes Coulonge.