There is nothing like the feeling of standing at the end of the road or the side of a railroad track with a backpack or canoe on my shoulders…and knowing that the adventure is about to begin!

loading the canoe at the Hartley Bay Marina dock

The 1960’s American folksinger Tom Paxton penned some memorable songs but it was “Ramblin’ Boy” on his 1964 debut album that always remained my favourite. It starts off with these words –

While we’re not talking T. S. Eliot-level poetry here,  in 1964 it was definitely a cut above the Beatles’  “She loves you – yeah, yeah, yeah”!   With Woody Guthrie as his model, Paxton was romanticizing the lives of the 1930’s Depression-era hobos riding the rails across a broken America in his very traditional folk song which sounded like it had been written long decades before. 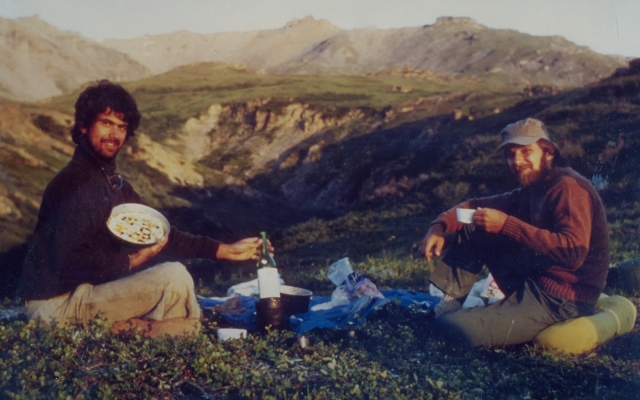 I was about seventeen when I discovered Woodie Guthrie’s autobiographical Bound For Glory at the public library and that book – and Paxton’s songs – made a big impact on my developing sense of the world.   It may have been the Summer of Love and “acid”  in San Francisco but the songs of Woody Guthrie and Tom Paxton spoke more directly to me, a miner’s son growing up in a hard rock town in northern Quebec.

I’ve had the ramblin’ boy bug all my life.  I had it when I was five years old and hanging on to the inner tube of a car tire along with my friend Veshu about fifty meters from the beach where our families were picnicking. We were on our way to a nearby island when my father swam up and very carefully pulled us back to the beach! 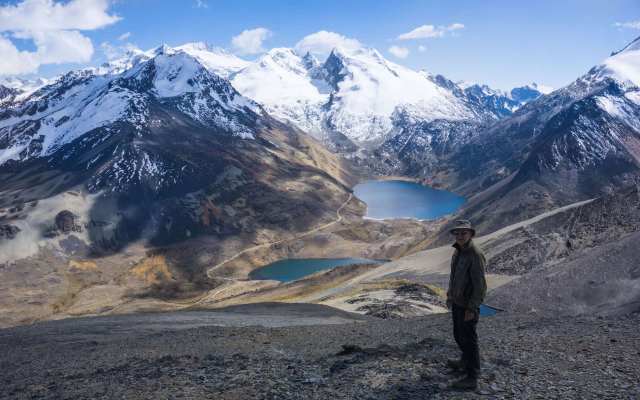 a view of glacial lakes in Bolivia’s Cordillera Real

That’s a ten-year-old me in the photo below. I am sitting in the front of my father Stanislaw and younger brother Martin; Kurt Wilke is on the right. Herr Wilke was a Berliner who served in the German Army; he was imprisoned in Russia for six years when captured in 1945.

Meanwhile, my father, a soldier from Zamosc in southeastern Poland, was in Warsaw in late September 1939 when it was taken by the German army. He would spend the next six years in German POW camps. After being freed by the British in May of 1945,  he served in the British Army for three years in its piece of a demolished and divided Germany. [See here for a map.] The three-storey house in Bad Rehburg that his army unit confiscated from its owners for its use was my mother’s family house.  That’s how they met! 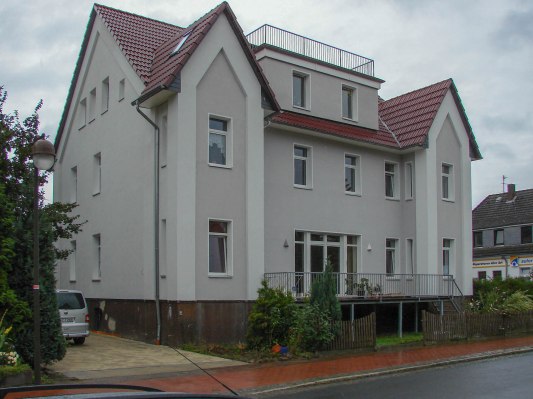 the Drebber family house in Bad Rehburg, just to the west of Hanover – my brother Martin visited in the early 2000s and got the photo!

In the photo above my father and Mr. Wilke sit on a Lake Kanasuta dock in Quebec’s Abitibi region in 1961! To some born-in-Canada folks in town,  they were just two more D.P.s (“displaced persons”) or des maudits fros depending on who was doing the talking.  It is humbling to contemplate what my parents lived through in the decade before they came to Canada – and in the decades after!

I’ve lost touch long ago with my childhood friend Veshu but I still have that ramblin’ boy bug sixty years later.  It has shaped the things I love to learn about – i.e. all of the humanities from languages to world history to world religions to anthropology, politics,  and economics.  It has definitely shaped the things I like to do with my spare time – wilderness canoe tripping, bicycle touring, hiking and mountaineering, and working out regularly at the gym so that I can do all that other stuff and enjoy it.

2012 – at the Carlson dock in Red Lake, Ontario  with pilot Mike and my brother Martin

It has ushered me into some incredibly beautiful (and maybe even sacred) places where few get to go because of the time or effort required. Not everyone has the ramblin’ boy bug and they have used their time and money – and their good health – to indulge in other pursuits. That’ s just the way it should be.  But for me,  there is nothing like the feeling of standing at the end of the road or the side of a railroad track with a backpack or canoe on my shoulders…and knowing that the adventure is about to begin!

2006 – Lakhpa, Brian and I with Mount Everest as a backdrop

Without getting overly philosophical, I hope to share some of what I’ve learned in some of these recent adventures, as well as show some of the pictures I took along the way.

The teacherly tone that comes from thirty-five years spent with mid-to-late teenagers in various Toronto classrooms will occasionally be evident!   If my posts encourage other travellers to step out of their front doors and embrace what has so far been unknown to them, that would be the best of all!

Every once in a while, as I look at maps and surf the net for another place or two to walk or paddle and pitch my tent, I think of Lao Tzu, the legendary Chinese sage and writer of the Tao Te Ching. One poem, in particular, # 47, comes to mind.  It reads like this –

Without opening your door,
you can know the whole world.
Without looking out your window,
you can see the way of heaven.

The Sage understands without leaving,
sees clearly without looking,
accomplishes much without doing anything.

As I ponder the above poem, I hear Lau Tzo saying to me,  “Hey, True North, where do you think you’re going? Don’t you know that you’re already there?  All your ramblin’ is only taking you further away from this obvious truth.”

And then I think back to his own life.   The collection of poems we know him for only came to be because a border guard insisted that he write down the essence of his wisdom before he left the Middle Kingdom and continued towards the Himalayas on his water buffalo.

After crossing the border he was never heard of again. Lao Tzu – the ramblin’ boy!

chillin’ at a Bon Echo campsite  on a cool May evening

Eliot’s Four Quartets is one of those places I’ve returned to often! Here is one of my favourite sections –

Home is where one starts from. As we grow older
the world becomes stranger, the pattern more complicated
Of dead and living. Not the intense moment
Isolated, with no before and after,
But a lifetime burning in every moment
And not the lifetime of one man only
But of old stones that cannot be deciphered. There is a time for the evening under starlight,
A time for the evening under lamplight
(The evening with the photograph album).
Love is most nearly itself
When here and now cease to matter.
Old men ought to be explorers
Here or there does not matter
We must be still and still moving
Into another intensity
For a further union, a deeper communion
Through the dark cold and the empty desolation,
The wave cry, the wind cry, the vast waters
Of the petrel and the porpoise. In my end is my beginning.

So it’s off we go on our own chosen trails, with this website hosting a collection of some of my more recent trips from home!

As Tom Paxton put it fifty years ago – May all your ramblin’ bring you joy!

on the banks of the Yukon River with some fellow ramblers!

A companion post to this one – Finding A Good Place to Pitch A Tent – focusses not on faces but on places where, for one reason or another, we chose to stop for the night.

When you’re on the move – hiking, mountaineering, canoeing – circumstances often dictate what small patch of the great outdoors you’ll be calling home for the night. Sometimes the sheer beauty of the spot convinces you to stop moving for the day – even if it is a bit early. Sometimes you’re with an organized group and the decision is not yours to make.  Sometimes you have to stop because the weather is promising to turn nasty and going on would be foolish. And sometimes you stop because of what is on tap for the next day.

The last reason was certainly true of the spot below.  We had climbed up to a plateau about 800 meters/2625 ft.  below the peak of Nevado Tocllaraju (6034m/19800ft) in the Peruvian Andes, our objective for the next morning.  It was late afternoon and we enjoyed the views and had supper at our high camp before crawling into our tents for some rest.  We would get up at 1:00 a.m. for our summit attempt. 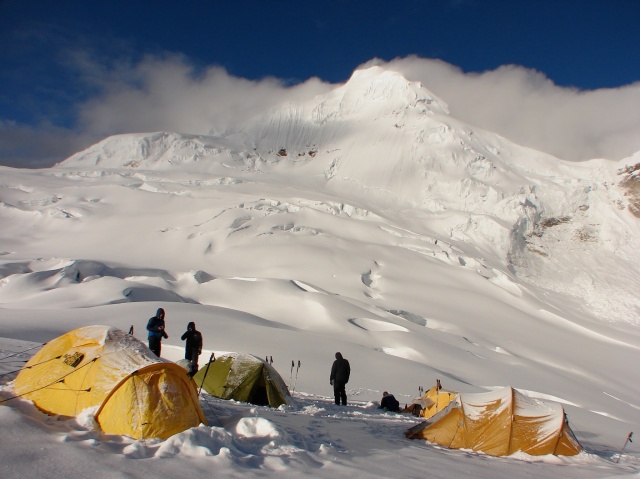