Day 6- Lingshi Camp to Chebisa via Lingshi Dzong and Goyul

This day would prove to be perhaps the easiest single day of the trek!  Two hundred meters of elevation gain to get to the Dzong before descending back down to Lingshi Village at 4075 m.  After that, as my Polar M430 altitude profile for the day shows, the trail was fairly flat until we went down 125 meters in our descent to the village of Goyuk, an hour from Chebisa and our tents. 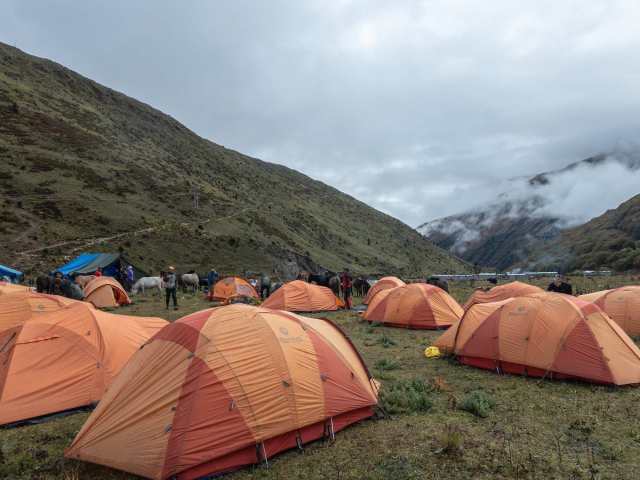 The dzong is on top of the hill (4220m) in the panorama below. Some ascent required! We were at 4013m at the campground at the bottom of the valley transliterated by

The many variations in spelling as Dzongkha words are hauled into Engish remind me of the similar situation in Bolivia where the various English transliterations from Quechua are sometimes not even recognizably similar!

Lingshi Campsite with Dzong hill in the background 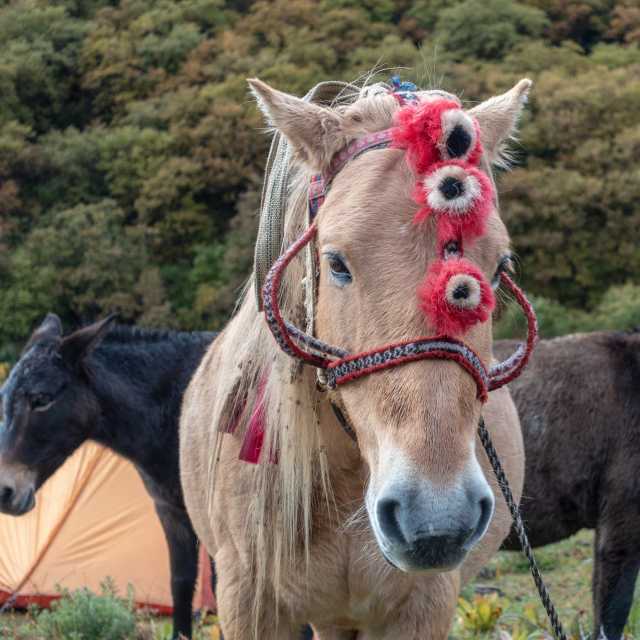 A half-hour on a gradually ascending and well-trodden path and we were standing next to the stupa pictured below.  Another forty-five minutes and we were on a plateau just south of the dzong. We waited there while our Bhutanese guide entered the dzong to see if we could visit.

the chorten on the way up to visit the Lingshi Dzong

our trekking group waiting on the plateau outside of Lingshi Dzong

The dzong has not had an easy time of it. More than one earthquake over the centuries has caused significant damage. As soon as the dzong gets rebuilt or repaired, another earthquake or fire hits it.  The original dzong dates back to 1668 – ancient in Bhutanese terms. It was meant as a checkpoint/customs station for traders crossing a nearby pass from the Tibetan side.  A severe earthquake in 2011 destroyed the dzong yet again, just after renovations had been completed a few years before. [See here for a Bhutanese newspaper article about the current reconstruction project. The article says that the 1668 dzong was built for a commemorative purpose and not for a practical one. This may be true of the rebuild but unlikely of the original!]

inside the ruins of the Lingshi Dzong

a view of the exterior of the Lingshi Dzong

some of the Lingshi Dzong work crew in October 2019

After our brief walk-through of the dzong ruins, we headed down to Lingshi village at 4075m.  The panorama below is of the village from the north slopes of the dzong hillside as we approached. We walked right through the village in two minutes and were soon walking along a ridge that eventually descended sharply towards Goyuk.  The satellite image below gives a good idea of the trail.

the trail from Lingshi to Chebisa via Goyuk

120  meters of descent from the ridge and we came to Goyuk village. The trail actually continues on to Chebisa on the east edge of the settlement but we walked in 100 meters to check out the architecture – a mix of traditional and more modern materials. While we were there I saw three locals.

Apparently, it has 100 inhabitants among 25 households but our mid-day visit may have caught them all away or at work (or staying out of the view of gawking western tourists!).  We did admire the colourful fleece blankets which were clearly of Chinese design and origin and wondered who had carried them across the nearby pass without getting caught by the military guards on the border! 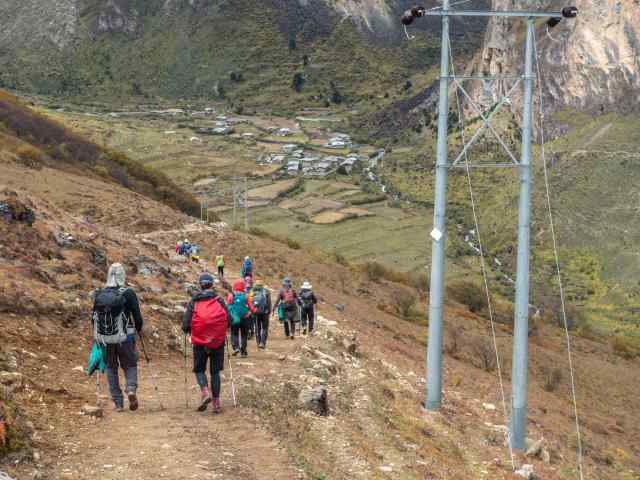 some traditional stone buildings in Goyuk

A day encountering the “divine thunderbolt” of the anarchic Tibetan Buddhist monk Drukpa Kunley is always an auspicious day in Bhutan!  The wall murals depicting his penis and testicles are considered good luck charms that dispel evil. I was actually expecting to see more of them on our Snowman trek.

Well, here in Goyuk we were blessed with a nice rendition. Our Bhutanese guide felt the need to return to the monk’s exploits on far too many occasions during the after-supper talks that were meant to tell us something about Bhutan.  It got to be quite tiresome.  If you need to know more, check out Keith Dowman’s book (totally uncritical) on the life of our dispenser of “crazy wisdom”.  See here for a sample.

The exploits of Chogyam Trungpa and Sogyal Rinpoche, two recent “enlightened” Buddhists who used their status as lamas (either earned or self-given)  to exploit hundreds of young women in Europe and North America, should serve as a warning to those who give “crazy wisdom” the benefit of the doubt.

Above the village was a dzong/temple which we did not visit.  In his essential guidebook for trekking in Bhutan, Bart Jordans recounts its history  –

Goyok is next to some impressive rockfaces, and in one of these there used to be a ruin (the Bja-Ghi Dzong). In the summer of 2003 the community renovated it on their own initiative over a couple of months. Building materials, carried by yaks, came from the distant forest between Shana and Soi Thangthanka; one day down, and two days back up. This dzong is one of the oldest and most sacred in Bhutan, believed to have been built in the 16th century by Phajo Drukgom Zhipo. There is a lhakhang in the dzong with several statues, and a caretaker and lay monk.    Excerpt From: Bart Jordans. “Trekking in Bhutan.”

More easy walking from Goyuk and we would get to Chebisa around 1 p.m.  Lunch would be served on the Chebisa version of the “village green” on the south side of the stream which separates it from most of the village’s two dozen or so houses. 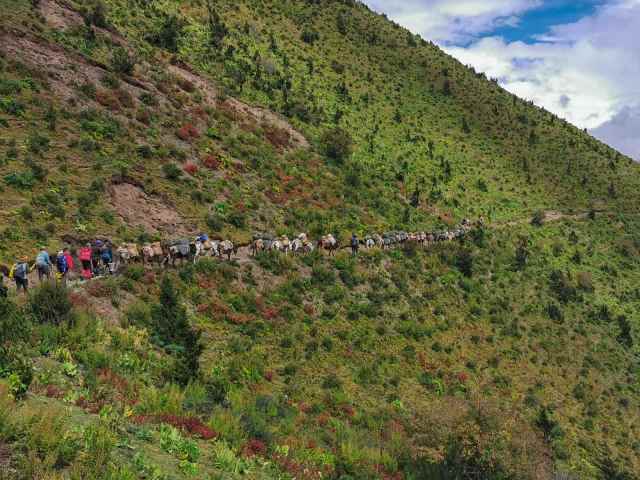 approaching Chebisa on the trail from Lingshi

Lunch – you can see the table set up just in front of the blue cook tent in the image above. And below you can see what I ate that day – a half a cup of plain rice (rather bland and without any spices or sauce other than the chilli sauce on the table to jazz it up) and some sort of soggy and rather tasteless vegetable.  The others may have also received some chicken or tuna.

My plant-based-only diet was becoming an issue.  An evening or two later when I was presented with essentially the same options as you see on the plate below, I ate nothing.  I went back to my tent and pulled out one of my 100-gram Ziploc bags with tamari-flavoured almonds and had that for supper.  Once or twice during the first ten days, I thought I might not finish the trek because I would run out of energy that the food is meant to provide!

As mentioned in a previous post, I had discussed all of this with the western organizer of the trek on more than one occasion in the months leading up to the trek and had been assured that the local agency would be aware of my food requirements. They didn’t have a clue! The cook would try his best once he got it, but his options were few in the field since he was not supplied with ingredients to make it really happen. 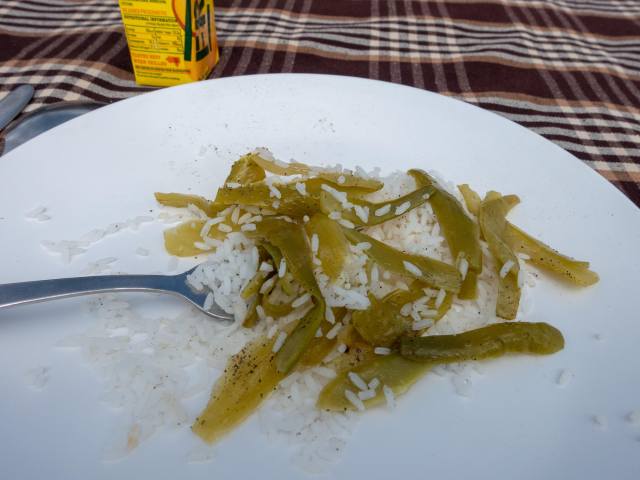 After lunch, we went for a walk up the small valley that Chebisa finds itself in.  At the top is a small waterfall, that little slash of white that you see a couple of images below.  As I walked there I had the feeling I was entering into a forgotten corner of a Judeo-Christian Eden or a Himalayan Buddhist beyul.   I walked past stately trees and watched a few horses grazing in their shade. A bit of hands-on scampering and I was able to get so close to the waterfall that the mist forced me to put away my not-waterproof camera!

the side of a Chebisa house – woodpile for the coming winter

a walk from Chebisa campground to the waterfall

I think I got the figures correctly! It does seem somewhat high!

Our trek started in Shana where a local crew provided three days of horse transportation to Jomolhari Base Camp.  When we arrived there, the crew was paid and it turned back for home and hopefully another trekking group.  Meanwhile,  we took on a new set of horses and handlers supplied by the settlements near Jomolhari B.C.  They moved us seven days up the trail to Laya on Day 11.

This crew would then return to Jomolhari with a nice bundle of cash while a crew from Laya would take us the next leg of the trek, the six days to Chozo.  The thinking seems to be that this way the benefits of the trek are dispersed more evenly among the various villages along the way.

In traditional upcountry Bhutan,  wealth and status were determined by the number of yaks and/or horses one’s family had.  This traditional Bhutan is dying as roads reach further and further north and make the animals less necessary since trucks and jeeps can do the job faster and easier.  Soon it’ll just be the trekkers who use horses and yaks! 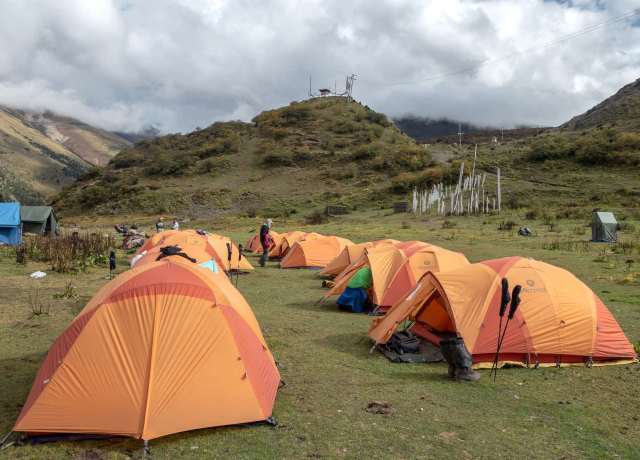 It is six kilometers (as the raven flies) to the border with Tibet; another ten kilometers will bring you to one or another small town on the Tibetan side, the source of all sorts of attractive trade goods.  All an enterprising local has to do is get them across those mountains and that border!

Chebisa and the Tibetan border

As the hydro poles and wires indicate, electricity has come to Chebisa!  One or two houses had satellite dishes and television has been available in Bhutan since the year 2000. Roads, electricity, television,  the smartphone that almost every younger member of the horse team and the cook and tent crew had …how do you measure how much Bhutan has changed in the past generation? 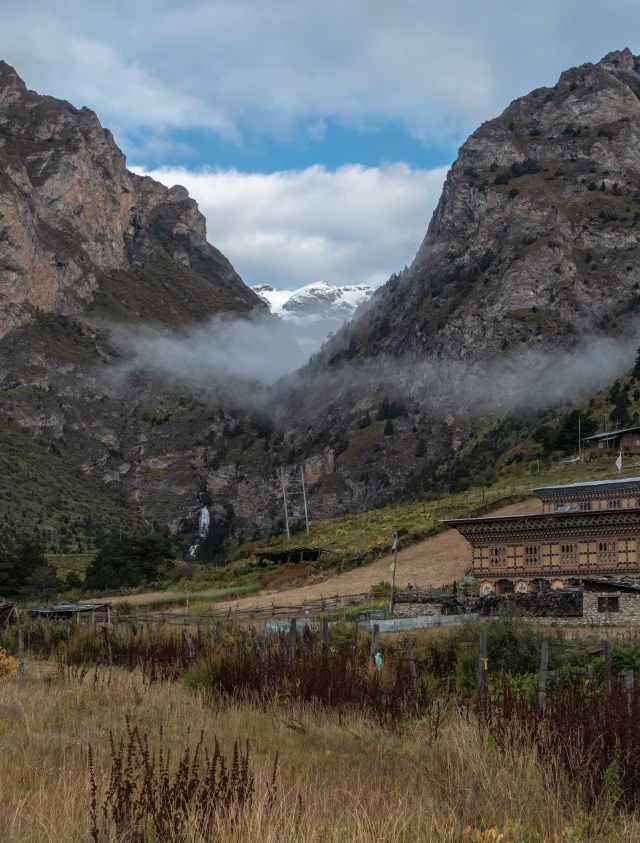 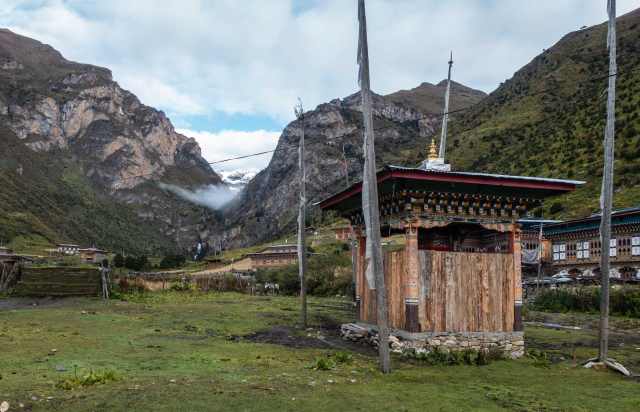 After we got back from our little mid-afternoon trek, the rain came down – at times quite heavy.  Laying in my tent and listening to the rain hitting it probably made it sound even worse!  Later – it was supper and -wonder of wonders – a meal I could get enthusiastic about: aloo gobi, aka potatoes and cauliflower and onions. Fantastic! I had double/triple portions and let the servers Kinley and Karma know how good it was!  Nothing like tasty food when you’re feeling a bit run down!