Cycling Around Tasmania: Day 5 – From Bicheno To St. Helens

Click on the More options prompt in the top left hand box to access the full screen view.

Day 5 on the road from Hobart – and I had covered less than 200 kilometers in the first four days!  This day would be more ambitious thanks to the fact that there really aren’t any great accommodation options before St. Helens!  In terms of ocean views, it would also be the best single day as the pix below will hopefully show.  And while the elevation chart above may look rather daunting with all those jagged peaks, the thing to remember is the very narrow range in elevation – i.e. only between 4 meters and 73. It was actually a very enjoyable ride!

The beach at the Denison River Conservation Area, about ten kilometers north of my  Bicheno Holiday Park tent spot, was my first of a number of spots to get off the bike and go for a little shoreline walk.  The path going down to the beach came complete with a reminder to be aware that the immediate shoreline is a bird breeding area.

path down to the beach north of Bicheno

looking north into the afternoon storm clouds near Bicheno 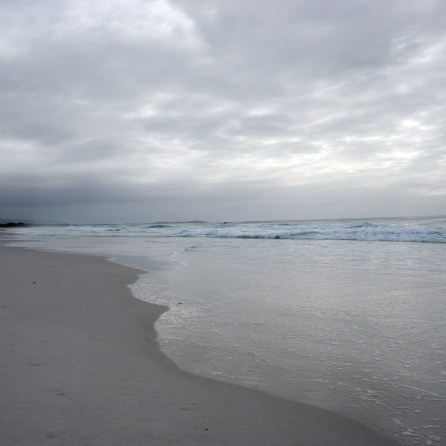 I ended up spending a half-hour at the most beautiful of the east coast beaches I had come across so far.  Back on the saddle, I got to do a more inland stretch of the A3 before coming down close to the seashore again in the Chain of Lagoons area.

the road to St. Helens from Bicheno – an inland stretch of the Tasman Highway

path to Tasmania east coast beach off A3

beach near Chain of lagoons north of Bicheno

Another stunning beach area – and perhaps due to it being autumn – like most of the others I had stopped at, I had it completely to myself.  I sat on the rocks below and had an apple and some sugared water.  A look at the map told me I could have lunch at Scamander within the hour so it was back up to the road I went for some more eye-popping beach views before the A3 turns sharply west to the junction with the A4.

cycling right along the shore on Tasmania’s east coast 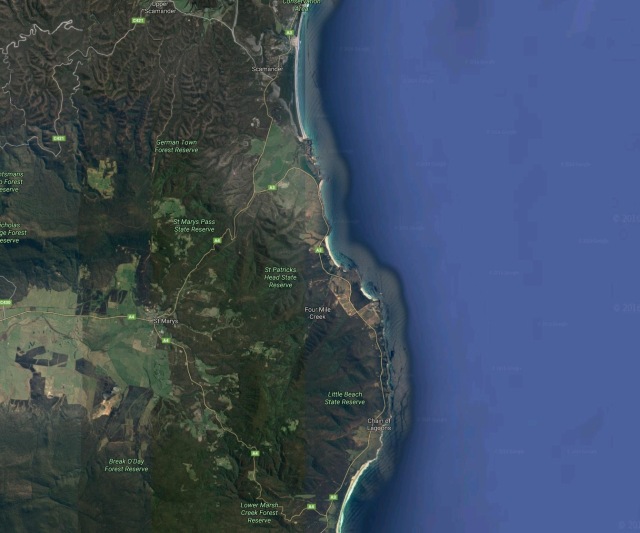 looking back at a nice stretch of the A3

Just north of the Four Mile Creek Conservation Area, the road runs right along the shoreline for a couple of kilometers before turning inland to the junction with Hwy A4.  When I got to the junction the distance markers told me that I had cycled 50 kilometres from Bicheno since setting off four hours before. This was not the Tour de France!

the signs at the A3/A4 Junction on the east coast Tasmania.jpg

As I cycled through Scamander I was looking for an eatery of some sort.  I finally found something just before I reached the bridge over the Scamander River. It was a takeaway with all the usual fast – and fried – foods.

With lunch done I had another 23 kilometers to do and I had some extra motivation. Some bad weather was coming in and I wanted to be settled in somewhere before the rain came tumbling down.  As I approached St. Helens, the first option I passed was the  Big 4 St. Helens Holiday Park.  It is on the south side of the town just across the bridge from the downtown area.  However, the thought of spending the night in my tent in a rainstorm was an option I figured I’d pass on.

Over the bridge, there is also a Backpacker’s hostel on the main street – Cecilia Street.  It is also downtown and it would put me closer to restaurants and grocery stores. Off I went to the hostel – only to find that it was shut down and had a “For Sale” sign on it!  Yikes! What now?  Cycle the 1.5 km. back across the bridge and up to the campground?  Across the street from the closed hostel was the Bayside Inn.  It was already starting to rain as I pushed my loaded bike across Cecilia Street. 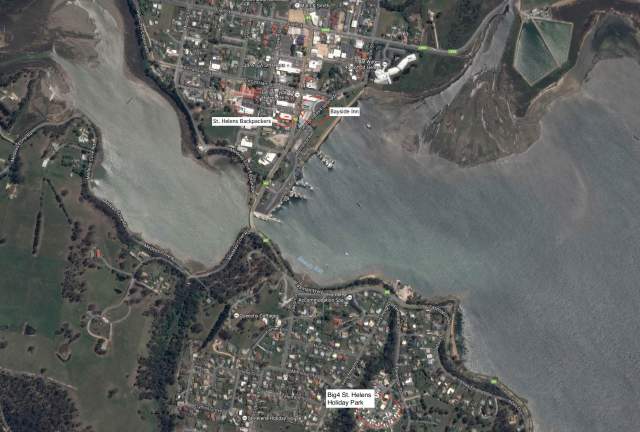 Within a couple of minutes, I had my room at the Bayside Inn – not in the new addition but in the original 1950’s motel structure on the side of it. At $80.for the night I was not complaining!  My bike and gear and I would be dry for the night! I rolled my bike inside the room and checked the facilities – a shower, a small kitchenette area complete with pots and utensils, wi-fi!  It would definitely do!

St Helens – the Bayside Inn – shelter from the storm 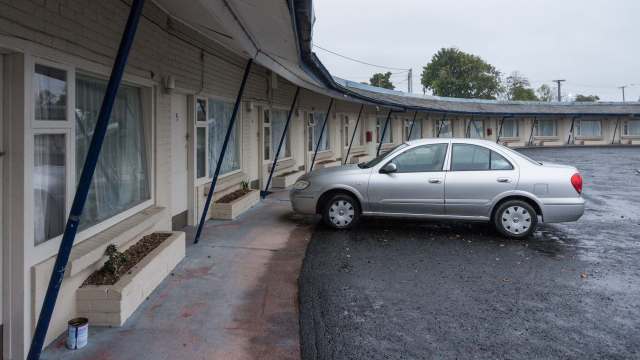 The rain came down all night and it was still raining the next morning when it was time to set off for Scottsdale.  By then I had come up with a solution to spending a morning and maybe more cycling in the rain up to my next day’s destination – I would just put my bike on the bus and miss the rain completely!

On the next street over (Circassian Street) from the Bayside Inn is a BP station.  It also serves as the pick-up spot for the Calows Coaches intercity bus that goes from St. Helens to Launceston.  Putting bikes on buses in Tasmania is a remarkably easy thing to do – unlike here in Canada.

I even left on the front and rear panniers on the bottom side of the bike so the bike would be cushioned if the ride was at all bumpy. (I did put a piece of cardboard under each of the rented panniers so they would not get all scrubbed up and smudged from rubbing!)

We left St. Helens at 8:30 and at 11:00 I was in Launceston, Tasmania’s second-biggest town.  Thanks to my revised schedule, I was also there a day early. Since  I already had the next night at the Backpackers’ Hostel paid for,  I figured my best bet would be to see if they had a room available for this day too. They did – and that is how I got to spend two days in beautiful Launceston, in some ways a more interesting town than Hobart to the south.

….this one has yet to be written but check out the posts below for more of my journey!

Day Eight – From Launceston To Deloraine

Day Nine – From Deloraine To Gowrie Park Via Sheffield

Day Eleven – A Day Off the Saddle: Rambling Around Dove Lake

Bicycling From Hobart To Bruny Island

4 Responses to Cycling Around Tasmania: Day 5 – From Bicheno To St. Helens