Previous Post: Sule Paya – the Stupa At The Heart of Yangon

An OOPS moment – this post is not quite done! I was working on it just before we set off on our 15-day canoe trip down Quebec’s Coulonge River and the Ottawa River … I set it to automatically publish on August 31. Well, I forgot all about the post and am recuperating from what was another excellent paddling adventure.  The pix are done but the writing is not.  Do check back in a few days for the finished text. Thanks.

after my visit to the Sule Paya I walked through Maha Bandula Garden to the Strand Hotel to enjoy a cup of coffee in air-conditioned comfort! Then further east down Strand Road to my second Buddhist temple of the day, the Botahtaung Paya. 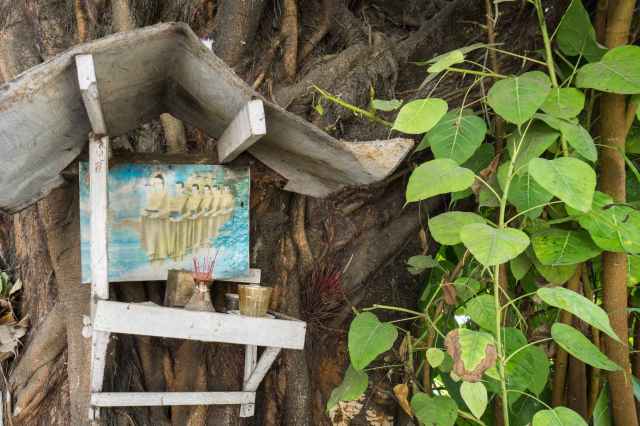 elaborate legends which connect the site to the Buddha in the distant past, probably long before there actually were any Buddhists in the area.

the name comes from Bo (leader) and tahtaung (one thousand).  The leaders were military ones who acted as an honour guard when the strands of the Buddha’s hair arrived 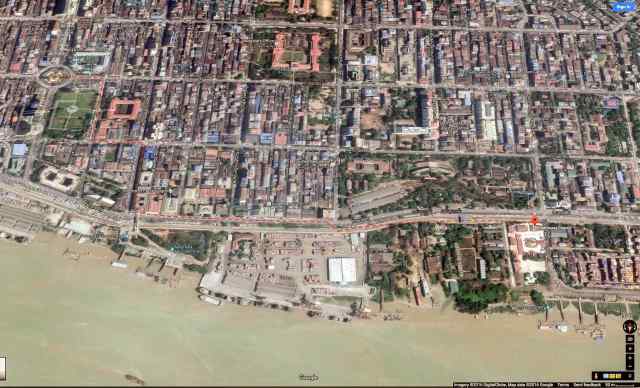 The story of the temple connects it to eight strands of the Buddha’s hair brought by monks from India. When is not clear -some accounts say during his own lifetime; others say 1500 years ago during the rule of the Mon King Sihadipa, ruler of the Kingdom of Thaton.  There to greet the monks were 1000 noted military leaders. It is not clear which ethnic group they belonged to  –  Bamar? Mon? some other? 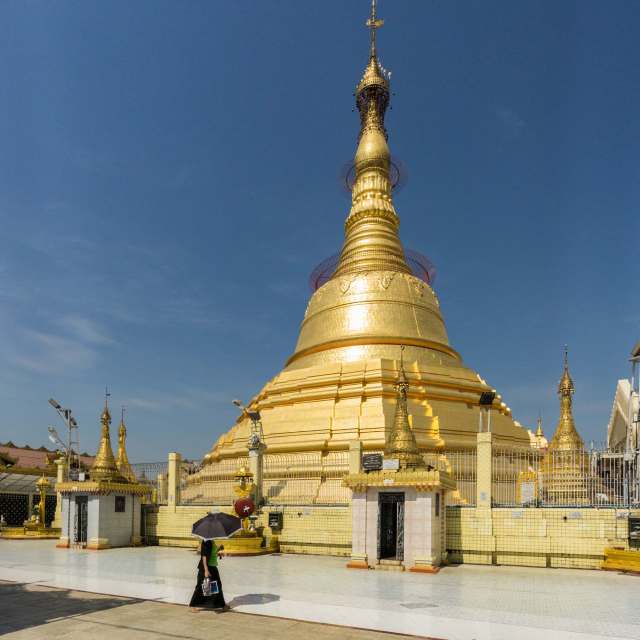 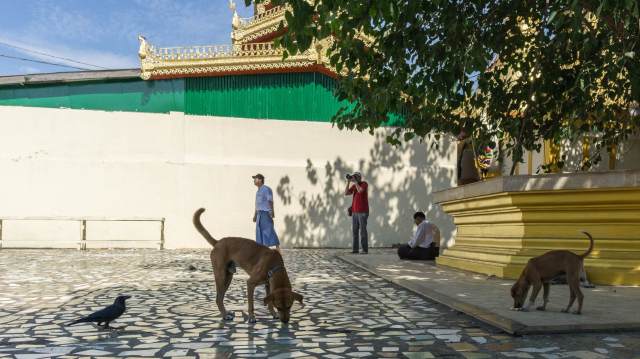 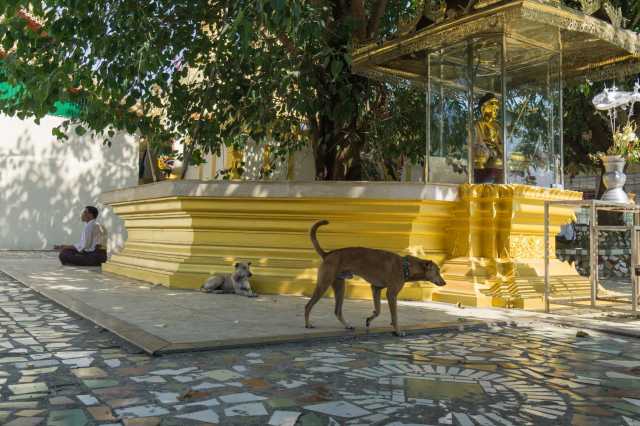 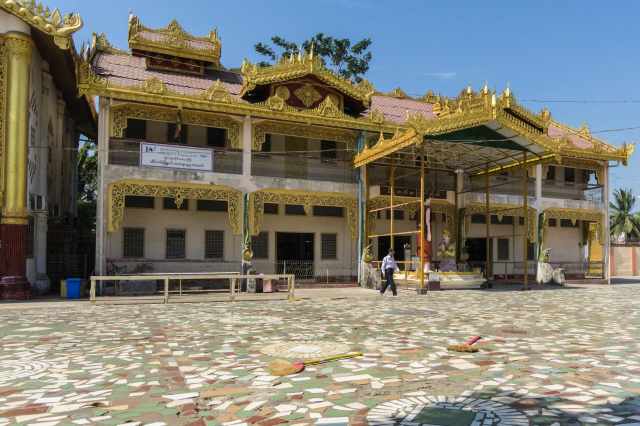 the rebuilt stupa is hollow – inside is a dazzling maze of gold-plated walls – during the rebuilding of the pedi after the war a relic chamber 20′ x 20′ x 6′ some say – others say a just a golden casket int he form of a stupa was apparently found that contained relics o fat eBuddha – a strand of hair and a couple of other bones. also relics including a strand of hair said to belong to the Buddha. Somewhere in the temple is also a tooth of the Buddha donated by the Chinese government in 1960 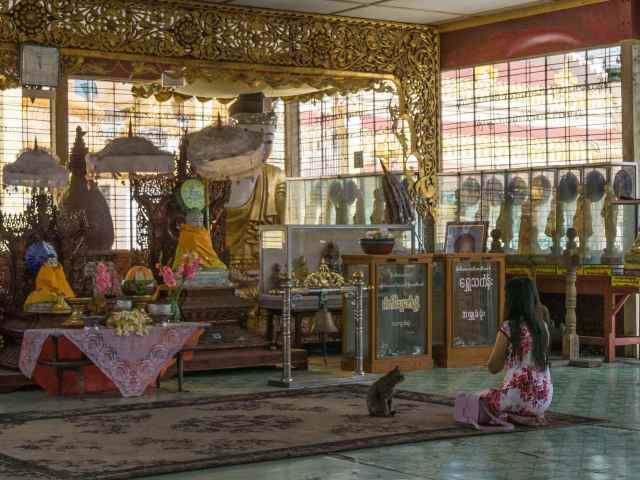 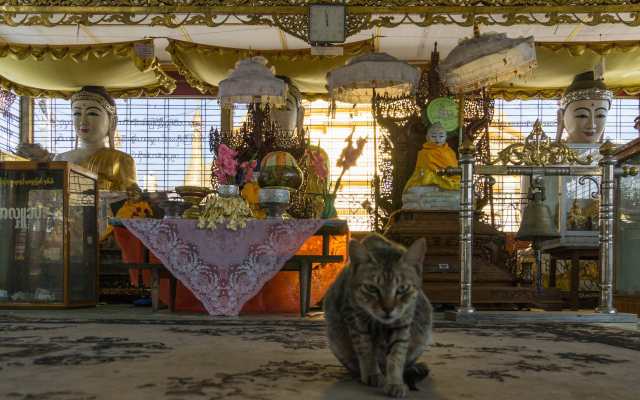 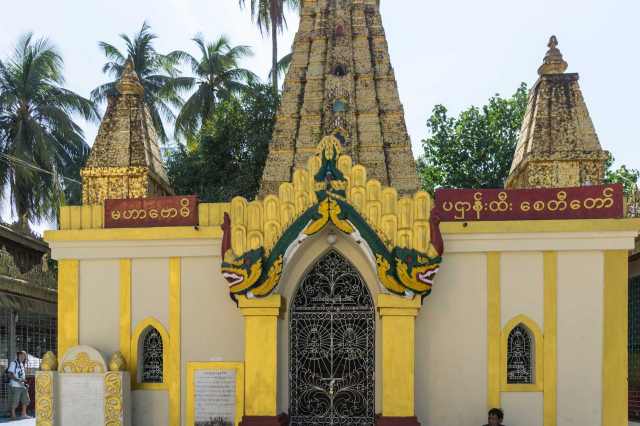 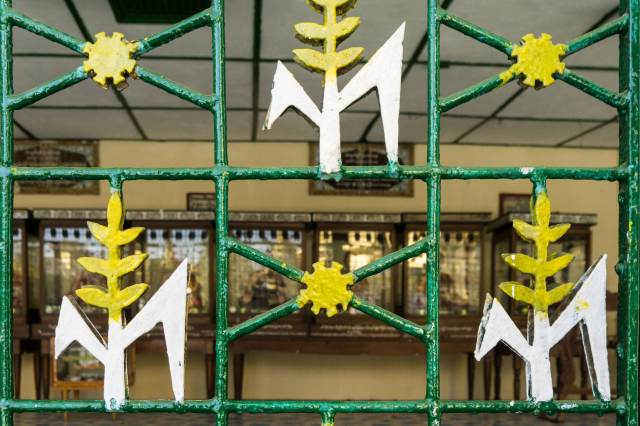 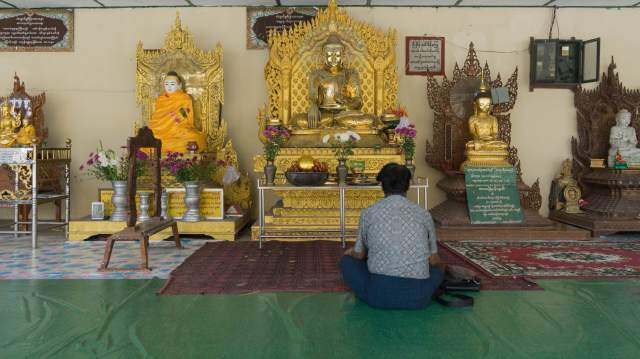 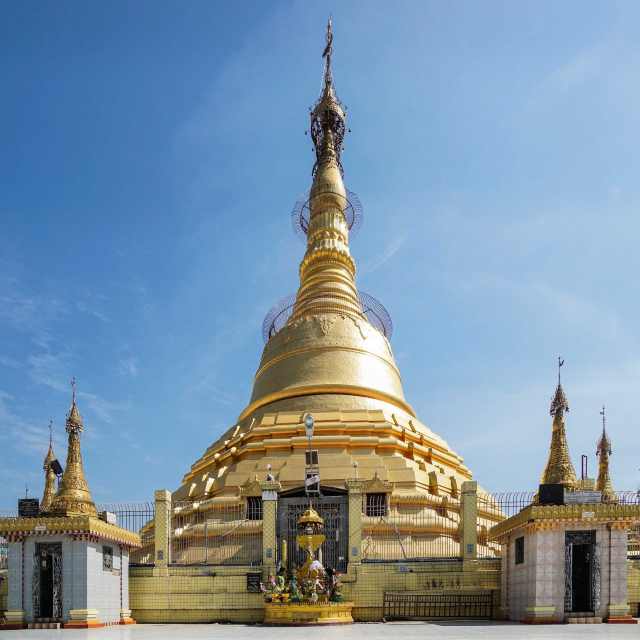 an overview of Rangoon’s Botataung stupa 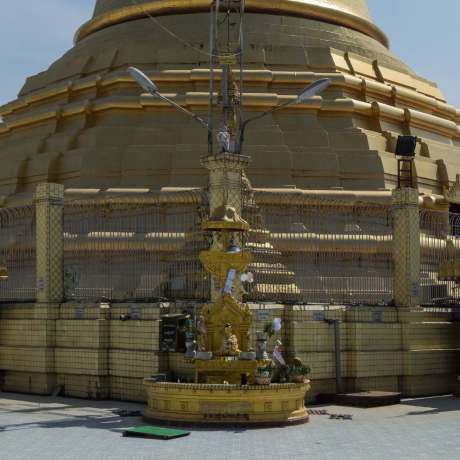 one of the planetary posts around the Botataung Pagoda base 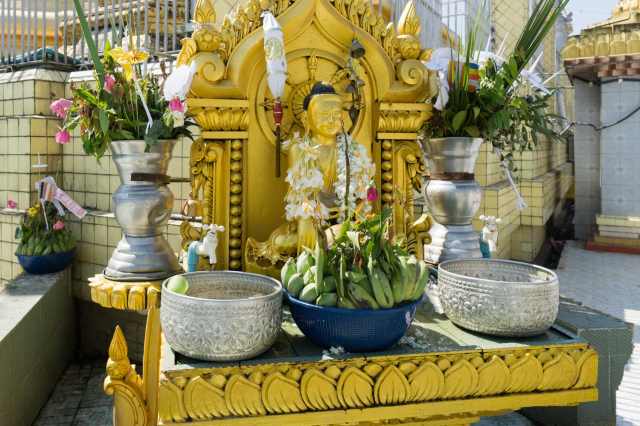 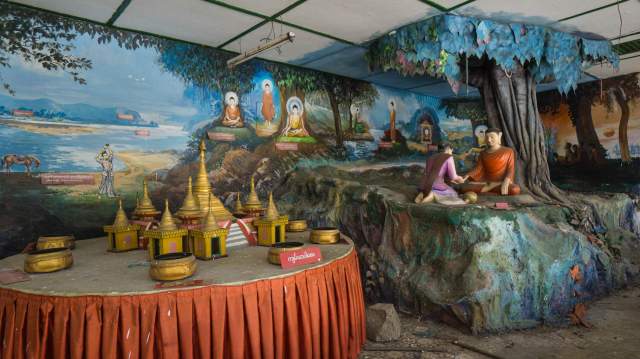 a visual retelling of the Buddha’s story 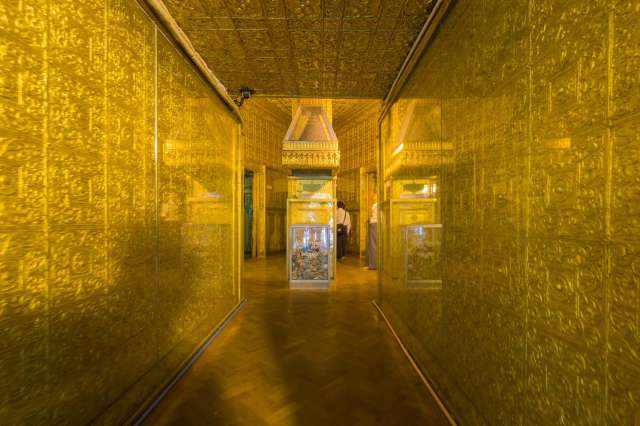 passageway into the hollow stupa 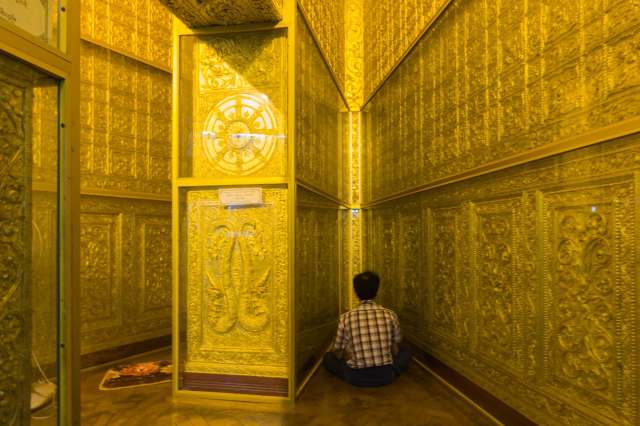 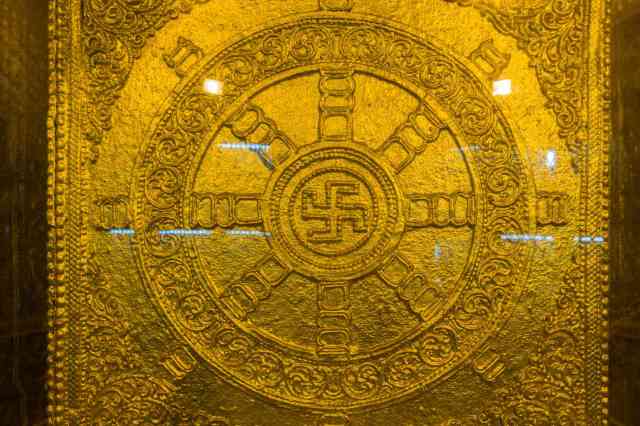 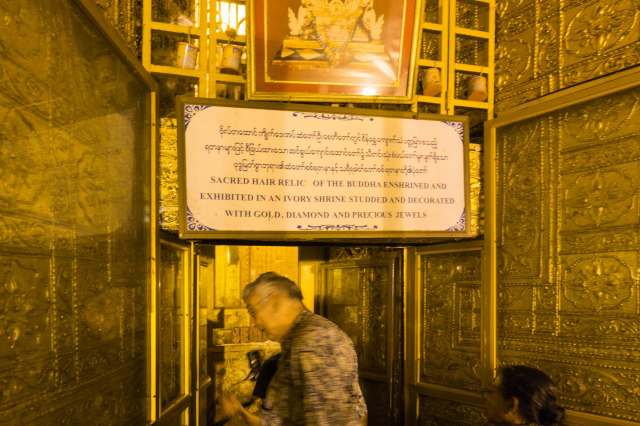 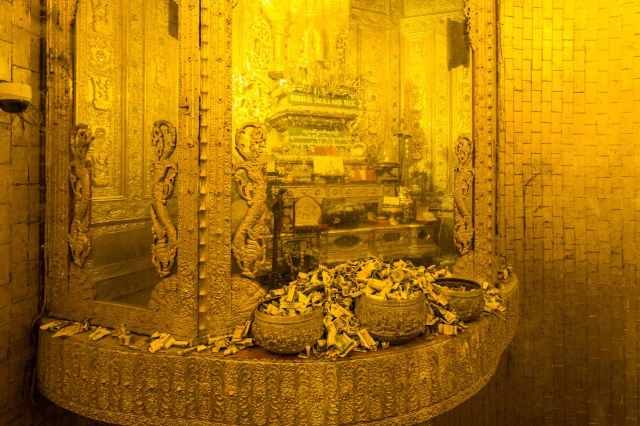 The Buddha’s Sacred hair Relic at the Botahtaung

large terrace around the stupa with a pond and bridges. In the water are terrapin turtles. Feeding them is yet another way of gaining merit to ensure a better future life. 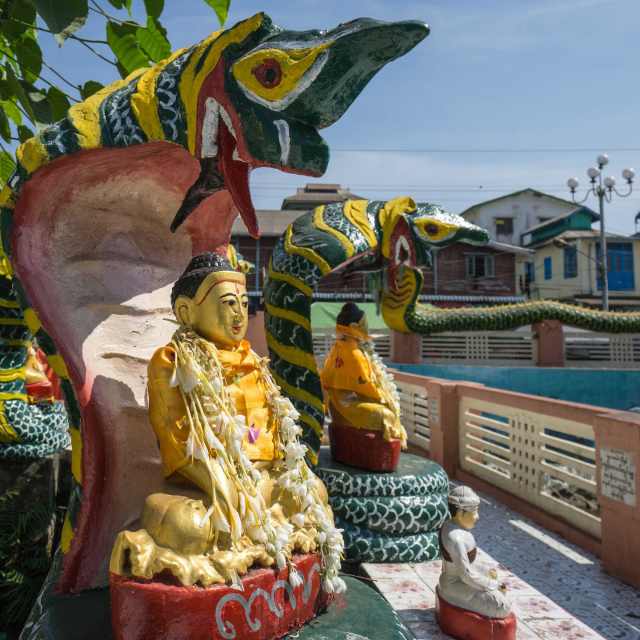 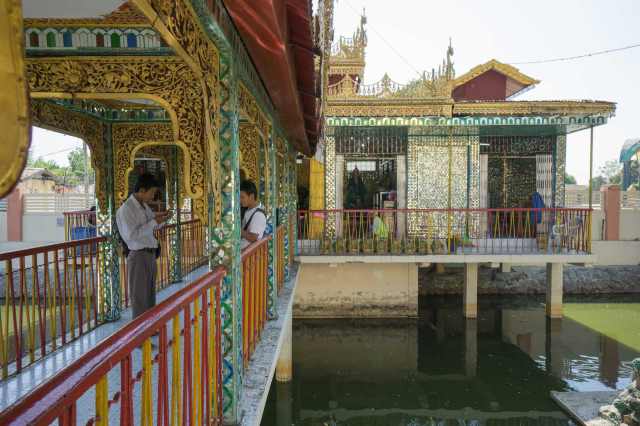 bridge over the pond with freshwater turtles 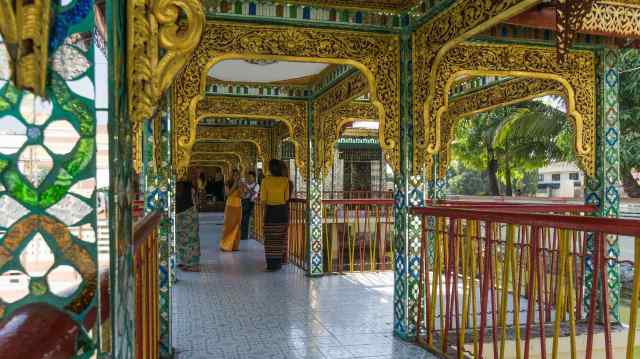 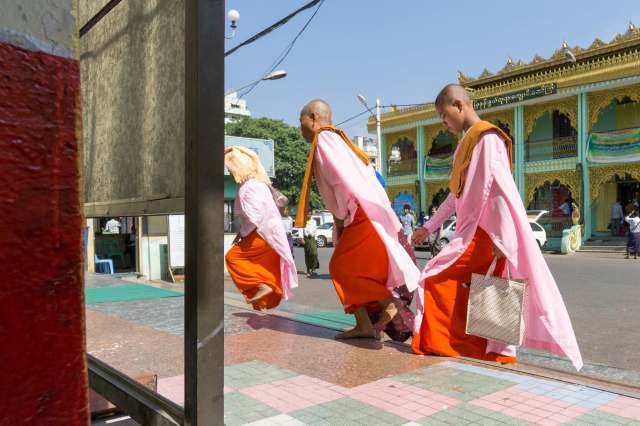 This entry was posted in Buddhism, Easy Travelling, Myanmar. Bookmark the permalink.