The Story Behind The Island’s Name:

I’m off to do some time – four weeks’ worth – in Van Diemen’s Land – and it won’t be a punishment!  The island – someone clever called it “the land down under The Land Down Under”  – was named Van Diemen’s Land in honour of the governor of the Dutch East Indies by the Dutch sailor Abel Tasman. He and his crew landed on the east coast in 1642.

Click on the More options prompt in the top left box for a full-screen view.

It was the British who set up the first colony – a convicts’ settlement – on the island in 1803; it was their second colony in Australia after the founding of Sydney in 1788.

Until 1853 Van Diemen’s Land – and especially the Tasman Peninsula –  would serve as the ultimate banishment for convicts from Great Britain and Ireland. [I had no idea of the history behind a U2 song titled “Van Diemen’s land” on the Rattle and Hum album until I started reading up for this trip! Here is a Youtube clip of Edge singing it in performance back in the 1980s.]

Hold me now, oh hold me now
’til this hour has gone around
And I’m gone on the rising tide
For to face Van Diemen’s land

In 1854 its name was changed to Tasmania, thus honouring the Dutch sea-captain who first set European eyes on it.  To no surprise, the indigenous people who were already there did not fare well at all.  These days the island’s nickname is Tas or Tassie and it is one of Australia’s seven states, separated from the mainland by the 240-kilometer-wide Bass Strait. 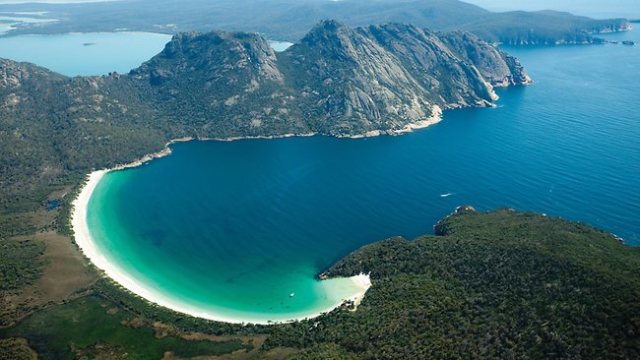 Maybe it has something to do with islands? My three-week Cuba trip in January of 2011 was followed by a  great ride  on New Zealand’s South Island in February 2013.

Sri Lanka was a planned early 2014 trip  until I remembered the 30ºC + temperatures  in Cuba!  When an avid cycle touring friend returned from Sri Lanka and noted that the state of the roads and the traffic volume would make for a very unpleasant ride, I ended up joining a small group of fellow walkers instead. We spent a couple of weeks hiking the island’s hill country. (See here for the first of the Sri Lanka posts!)  The few cyclists I saw did not make me think I wanted to be on the road with them!

The Richmond Bridge – built in the 1820’s. I’ll be cycling over it on Day 2 on the way to Triabunna and the east coast.

Tasmania – another island and one of the world’s great bicycle touring destinations.  I had not really considered it because of the 27 to 30 hours  to get there. However,  having done the flight to Christchurch, NZ , I figured Hobart wasn’t that much further.  When my brother reminded me that it was still less than the 2000 kilometers and 36 hours it took us to drive  from Toronto to Red Lake, Ontario for the start of a canoe trip, my mind was made up! 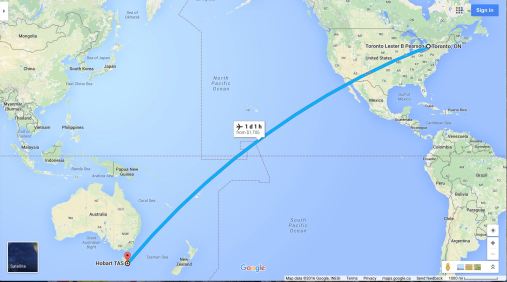 Put the time to get there on one side of the scale; on the other side you find these points:

It’s easy to see why Tas gets the rave reviews it does from bicyclists who make the journey to get there!

Since Tasmania is a popular bike touring choice, it’s easy to find information on the net to help with planning. I’ve spent some time at the   Bicycle Network Tasmania website and its many links to yet other sites. It is a very thorough site with everything you could want to plan your own route.

There are many trip reports out there.  One I looked at was at the Travelling Two web site belonging to a Canadian couple (Friedel and Andrew) – the post is  “Cycling Tasmania”.      The Cycle Traveller’s blog  has a post titled  “Cycle touring Tasmania: the easily distracted way” which provided some useful tips and suggestions. Google “Tasmania bicyle tour” and you’ll find a dozen more that merit mention.

Renting The Bicycle in Hobart:

As I did for the N.Z. bike trip, I’ll leave my bike at home and rent one there. Given the $140.  to get the boxed bike to the airport in Toronto and then back home, as well as the $200. ($100. each way) charged for oversized sports equipment, I was already looking at about $340. to take my own bike. Still a question mark is what sort of condition the bike would be in after five sets of baggage handlers were finished with it.  I still remember going shopping in Vancouver for a new front wheel shortly after arrival from Toronto thanks to the damage the baggage guys did to my bike that time. Renting a bike in Hobart is the way to go!

I found my ride at longhaultasmania.com.au. I did consider the rental bikes at Green Island Tours but in the end felt more comfortable going with a true touring bicycle instead of a hybrid with its straight handle bars and more compact frame. The choice cost me an extra $200., to be expected since  at a retail price of AUD 2000. the touring bike sells for perhaps double the price of the hybrid.  You do get what you pay for!

For AUD $650. I have three and a half weeks’ use of  a premium touring road bike, the Surly Long  Haul Trucker. Included are the front and rear pannier racks, though I am not expecting the front racks to look exactly like the ones in the image below.  It will be the first time I use a bike with 26″ wheels as opposed to the usual (for me) 700C.  The consensus seems to be that, given the same number of spokes (usually 32 on a touring wheel),  the smaller wheels are stronger. Not that I expect to be doing a lot of off-tarmac riding – Bruny Island may be the one section where I face major dirt road.

I will be bringing my own panniers – the two smaller front ones and the two rear ones – as well as a handlebar bag.  I try to spread the weight out with a third in the front and the rest in the back.  Amazingly, the weight of the bags alone is 4.6 kilograms (ten pounds)!  My goal is to keep the total weight of the bags + contents  down to about forty pounds. 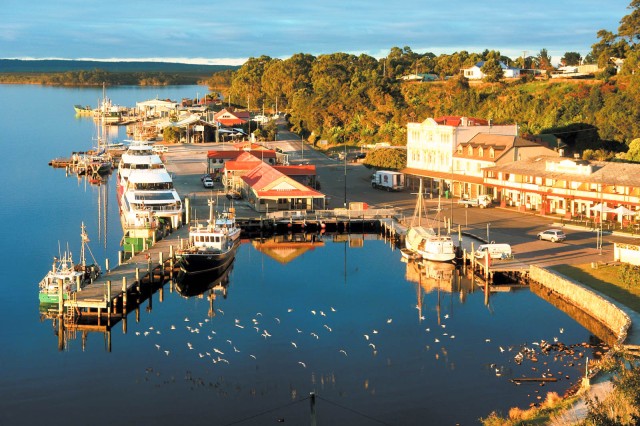 Strahan harbour – photo /credit to Owen Hughes   – I’ll be spending a day off the saddle here, maybe doing nothing or maybe taking a boat or plane ride along the coast

I have booked accommodation in Hobart for the first three nights as my body gets over the 16-hour time change  and being in the air or in aiports for over a day. My tent, as well as a sleeping bag and Thermarest air pad,  are coming along.   My cook gear will be left behind; I’ll use the facilities in the backpackers’ kitchens instead.

I will make a concerted effort to keep it vegan. Along with the few food items I am bringing with me, local food markets and the occasional Indian or Thai restaurant will hopefully keep me fueled.  At worst, I’ll lose a bit of weight – maybe as much as the 15 pounds I lost  last September on our Trans-Cordillera Real trek in Bolivia!

My Spot Connect, a gps tracking and communication device,  is coming along for the ride. My brother and I have been using it for our northern Ontario canoe trips for the past five years and its SOS button is reassuring to have in case of emergencies. (Not that you’d ever want to use that button!)  It also sends your location marker every ten minutes via satellite to a server, which  then poses it on a website which the folks back home can monitor my where=abouts.  Tasmania is hardly a wilderness canoe trip but the signals will start being recorded on March 6 as I head for the Bonorong Wildlife Sanctuary and Richmond on Day 1 of my Tour de Tasmanie.

Meanwhile, I’ll be watching out – especially on nights when I am tenting! – for a possible visit by these grumpy little “devils”!

See here for the image source – I hope to have my own Tasmanian Devil photo to  insert here soon!

Update: If only there were so many Tasmanian Devils that one or two would be peeking into my tent at a caravan park!  The reality  is that the species is on the verge of extinction thanks to a facial cancer that has reduced its number to about 10,000.  I did see a couple at the Bonorong Wildlife Sanctuary.

Unfortunately, I saw far too many more – along with wallabies, padamelons, possum, and wombats – as roadkill on the roads I cycled. I remain unconvinced by the argument that this is a positive sign that the populations of these animals are healthy.

You can access the pix and maps of my actual bike trip beginning with these posts- they will take you up the scenic east coast to St. Helens.

Pix of Tasmania’s East Coast – From Hobart To St. Helens

Day One – From Hobart To Richmond Via Bonorong Wildlife Sanctuary

Day Two – From Richmond To Triabunna

Day Three – From Triabunna To Swansea

Day Four – From Swansea To Bicheno

Day Eight – From Launceston To Deloraine

Day Nine – From Deloraine To Gowrie Park Via Sheffield

Day Eleven – A Day Off the Saddle: Rambling Around Dove Lake

Bicycling From Hobart To Bruny Island