Rambling Around Downtown Toronto On A Saturday in October

It is Canadian Thanksgiving weekend and my Saturday began with the usual morning walk with Viggo around the perimeter of Riverdale Park. Given that he’s really meant to be a working sheepdog, I think of our ramble as a pasture patrol.  On our rounds, we met a handsome Belgian shepherd dog in the off-leash area. 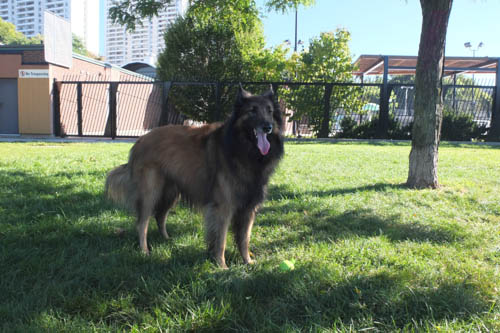 Rider, a Belgian Shepherd, in the off-leash area at Riverdale Park East 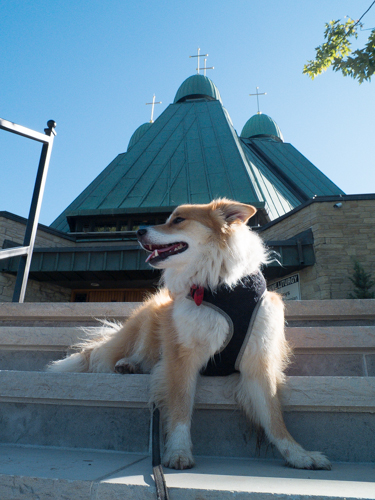 After dropping Viggo off at home with Laila, I hopped on my bike for a quick ramble through the downtown area of Toronto, just across the Don River from where we live. First on the list was a visit to the Royal Ontario Museum (ROM) to check out the Mesopotamia exhibit. While there I also visited old friends in the China gallery. 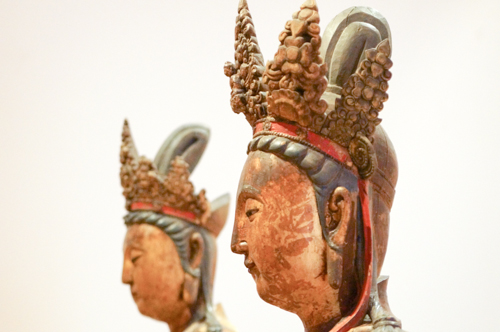 the heads of bodhisattva statues at the R.O.M 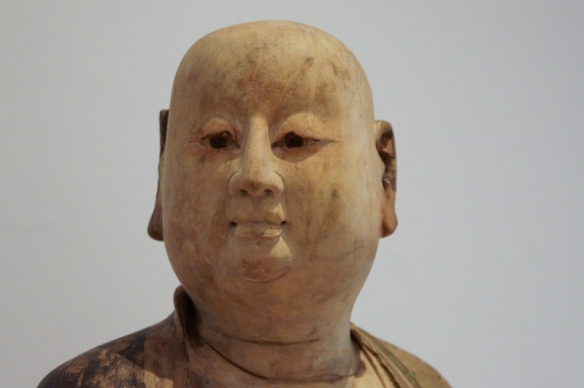 head of the statue of a Chinese monk – ROM

The Mesopotamia exhibit was in the basement of the museum and the lighting was very subdued.  I had seen most of the pieces before – most are from the British Museum with some R.O.M. items added. I spent maybe thirty minutes there but found I was getting tired (the lighting?) so decided that I would visit another day. (My R.O.M. membership has its benefits!)

On the way out I thought I’d visit the Native Peoples gallery. At the gallery entrance is this wonderful painting by the Anishinaabe painter Norval Morrisseau. It brought back to mind the photos of some of the canoe pictographs I had taken at Cliff Lake back in July. 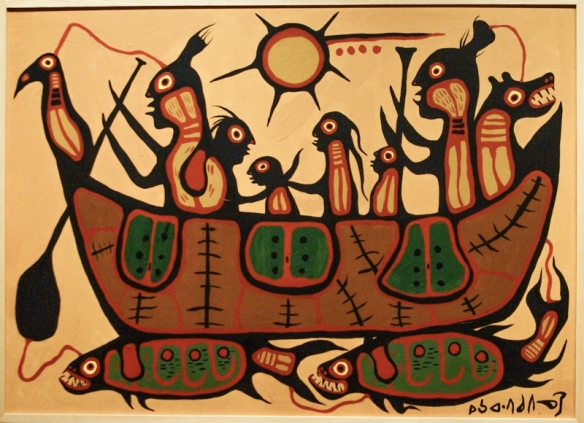 The snazzy new $250,000,000. retrofit ( Daniel Libeskind’s Crystal stuck on top of the original building)  was finished back in 2008 and it is frankly not a great success.  There is now lots of space completely unsuitable to exhibit artifacts.

The once-front entrance on the University Avenue side is now just an interesting little side corner. I stood below the great dome and looked up to the museum’s “mission statement” on the tiles of the mosaic above – 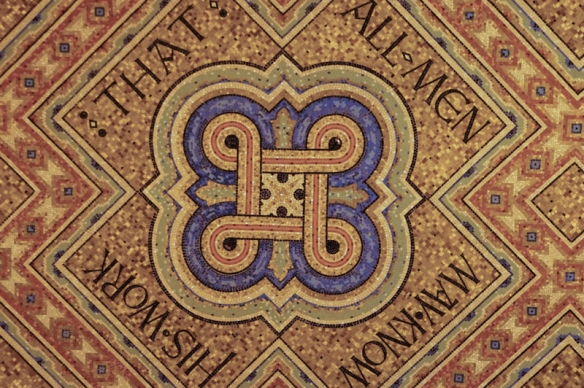 mosaic on the dome of the ROM

Hopping on my bike, I cycled down University Avenue towards the Eaton Center. I was on my way to the Apple Store to pick up a trackpad for my iMac. It was a beautiful sunny day so I ended up stopping at City Hall en route to check out the Ai Weiwei installation piece “Forever Bicycles” again.  Nuit Blanche has come and gone for another year but a few pieces remain a bit longer.  I had been there a few days before but it had been overcast – and I was wondering if some sunshine might help the piece make a better impression. 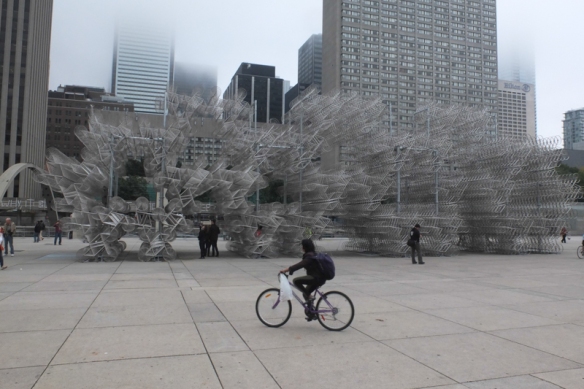 I approached City Hall from the north on Elizabeth Street and, seeing that the gates were open, decided to check out the rooftop terrace that goes around the sides of the square. It is one of the great vantage points from which to take in Toronto’s downtown “skyscape”! 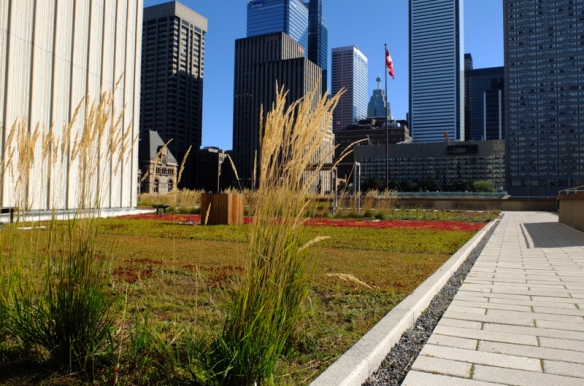 City Hall terrace on the north side of the square 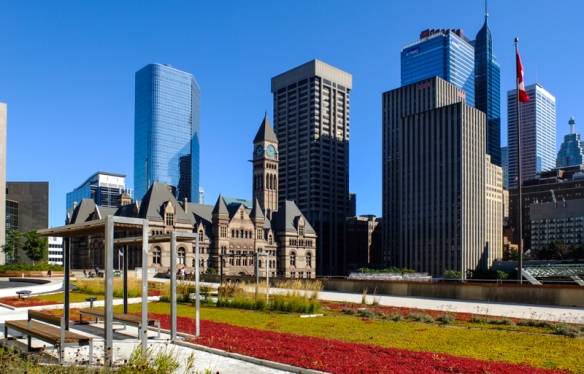 I looked over the edge of the terrace and there was Weiwei’s installation piece – and not too far away was Henry Moore’s “The Archer”. 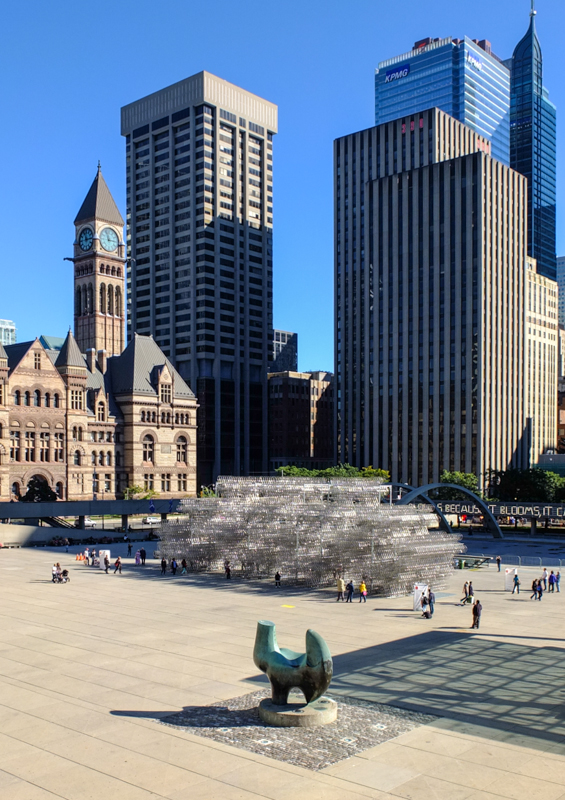 a panoramic view from the City Hall terrace – the flying saucer has landed! 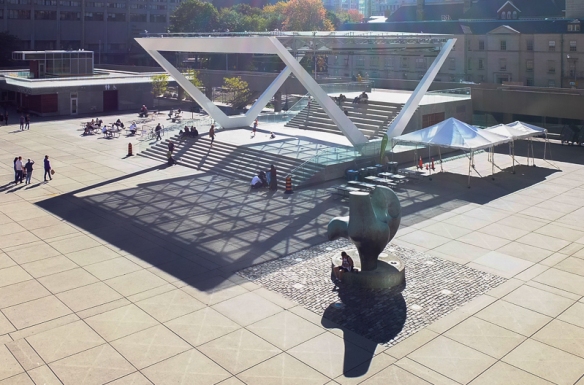 looking into the sun at The Archer_ 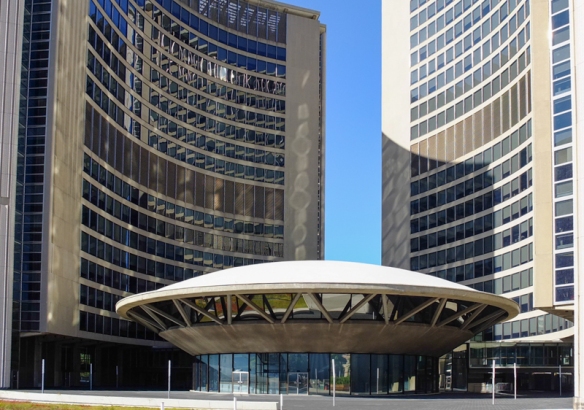 As for Ai Weiwei’s piece, I’ll admit to finding it as sterile as I did a few days ago. It left me cold with its mind-numbing repetition of not-even bicycles – an homage to the Chinese ability to clone almost anything industrial.  Apparently, he has more interesting work elsewhere. 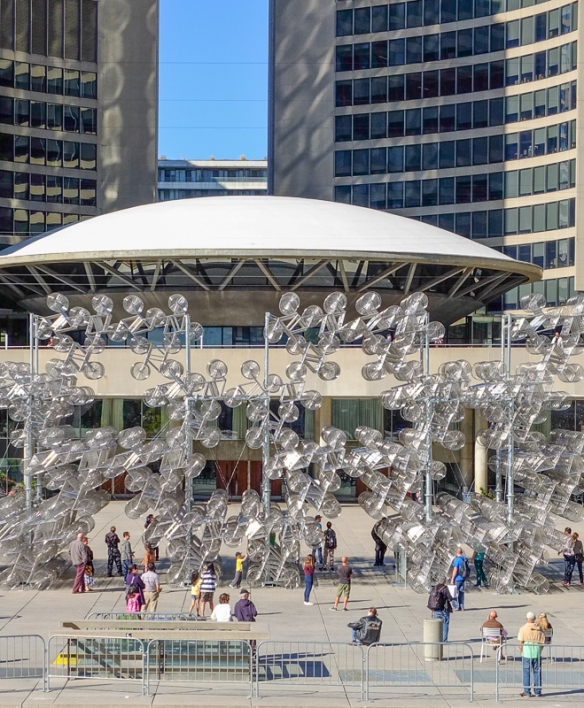 Weiwei and City Hall – closer up

And then it was time to get over to the Apple Store at the Eaton Center. It is just a couple of streets over from City Hall so off I cycled to what can only be thought of as a modern cathedral, offering salvation through consumption! Without a doubt, the shopping mall has replaced the church or temple as the place we go to find solace or meaning – or in my case, a trackpad for my computer. 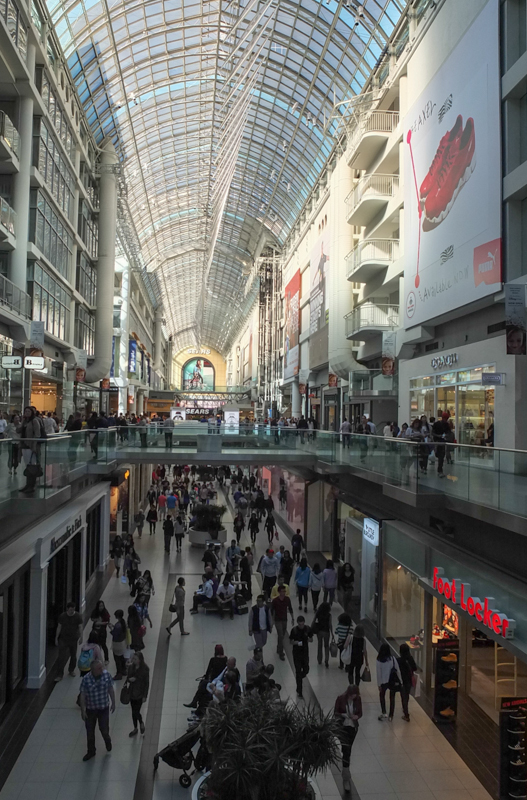 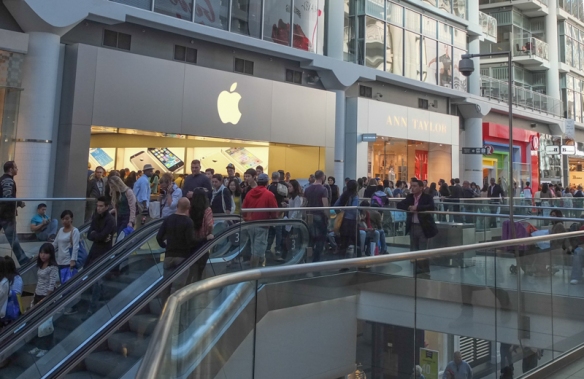 crowds in front of the Apple Store

Flying above the crowd at the south end of the mall is Michael Snow’s iconic installation. 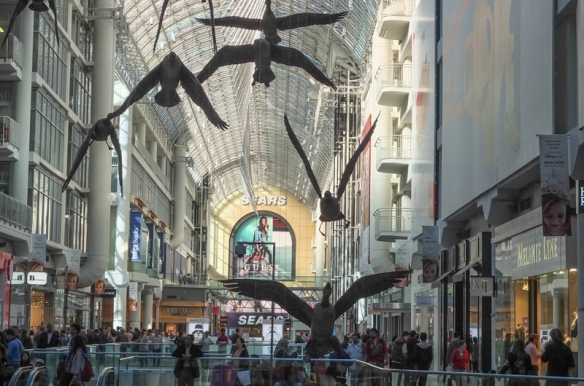 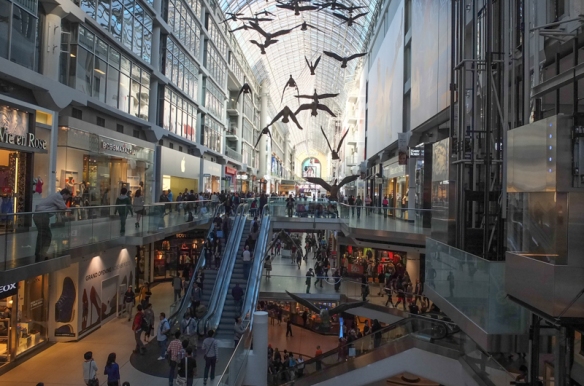 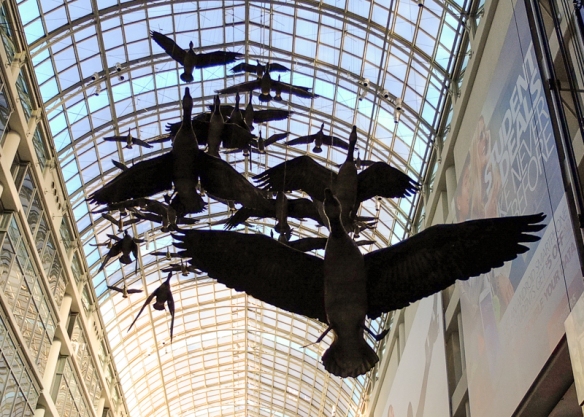 My new piece of Apple in my pocket,  I cycled up Yonge Street towards Dundas Square, the new “living room” of the city. On my way, I spotted the bike rack you see below – not a lot of takers on this particular day!. 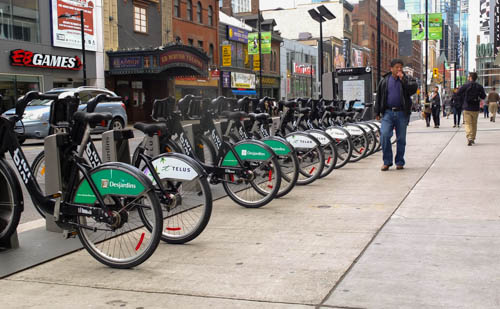 bicycles for rent on Yonge Street

And then over and through the square itself – making sure I didn’t get caught by the gushes of water. 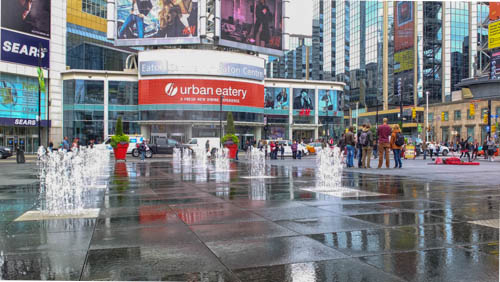 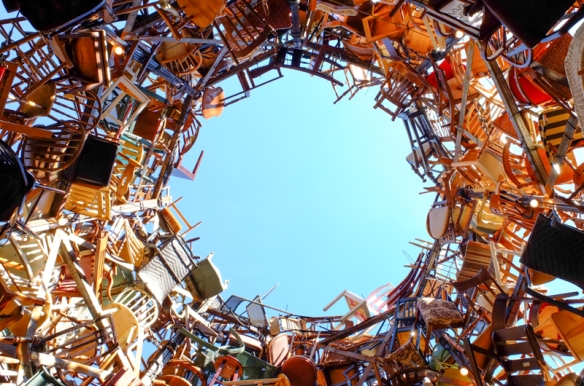 Tadashi Kawamata’s Garden Tower in Toronto is another hold-over from this year’s Nuit Blanche. Standing next to the “old school” Gothic features of the Metropolitan United Church, it has a wackiness that I can’t help smiling over. 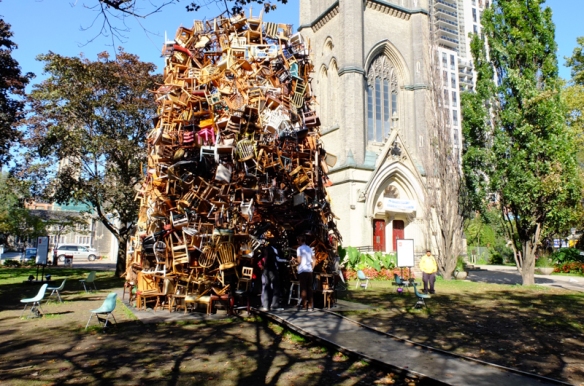 the Chair Tower from the outside

And then it was time to head back to Riverdale. I had left home at about 10:30 and it was now about 2.  I still had not had lunch but figured that instead of eating out I’d pick up a couple of vegetarian dishes at the south Indian/Sri Lankan place on Wellesley in Cabbagetown and bike home for lunch with Laila. On the way, I cycled up Sherbourne Street and got to experience the new dedicated bicycle lane. Unlike Montreal’s, there is no concrete barrier to reinforce the separation. 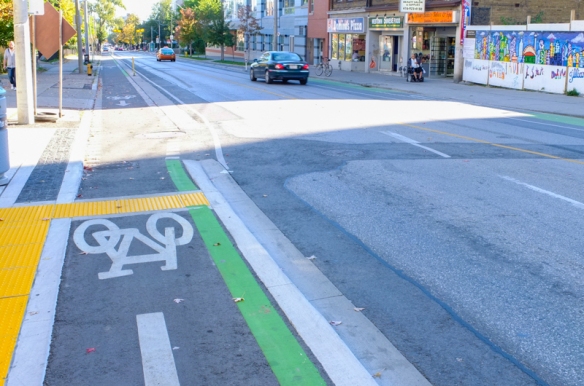 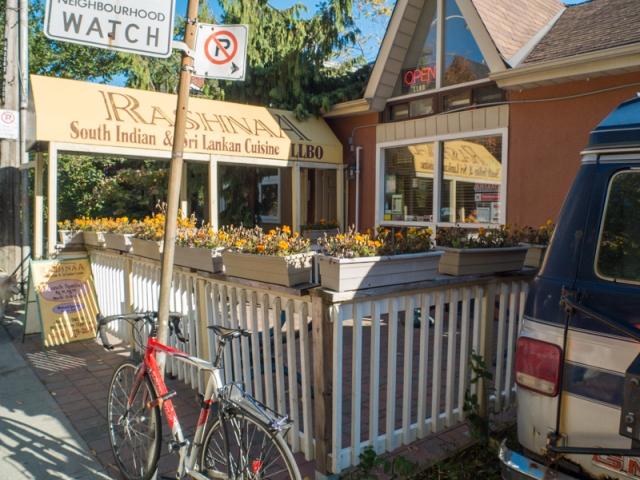 A nice ride through Cabbagetown and over the bridge to Riverdale and I was home. Waiting for me was Viggo, ready for a another walk and play session somewhere in the neighbourhood. 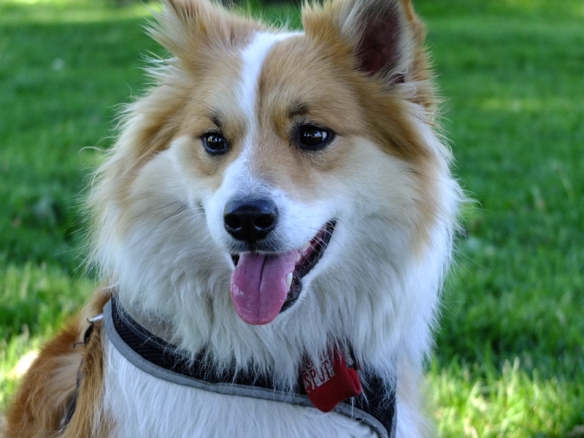